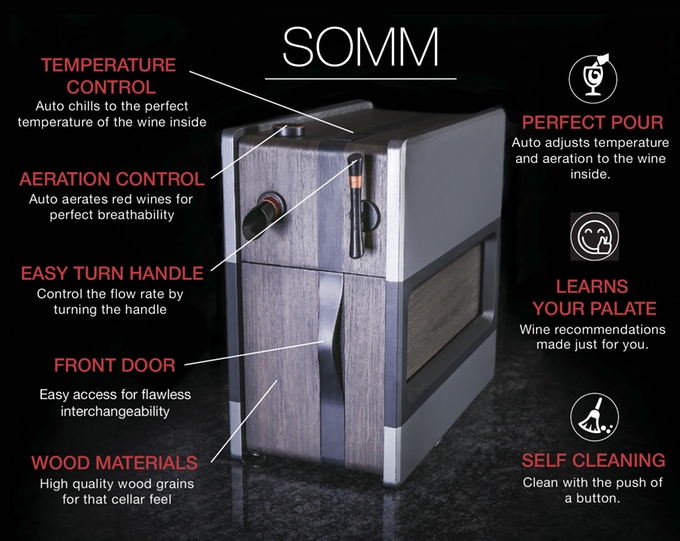 After launching its Kickstarter campaign on April 7th, it took only 15 hours for the Somm wine dispenser to attract $100,000 in backing from oenophiles, with most ponying up $199 to get the sleek machine by Christmas. It features an array of ‘smart’ features and uses custom containers– think of it as a Keurig for wine.

The containers are called Sylos, and hold about three bottle’s worth of wine. They also communicate with the machine, which adjusts things like temperature and aeration depending on what kind of wine it’s pouring. And at least during the pre-order period, they’re reasonably priced, ranging from the equivalent of $5 to $39 a bottle.

On top of a custom pour, the machine promises to track a user’s palate, and give tips on what other wines they might like, through a connected smartphone app.

Though there’s rising awareness that crowdfunded projects don’t always follow through on their promises, Synek, the company behind the Somm, has a solid track record. In 2014, they crowdfunded and created a countertop beer dispenser which shares several features with the Somm.

The company has also shown it can navigate some pitfalls of the pod-based coffee systems that seem to have inspired its machines. Though the Keurig K-cup has been criticized as an environmental plague, Synek claims the Somm’s containers have 70% less CO2 impact than bottles.

Keurig Green Mountain has also courted controversy by attempting to make its machines incompatible with any coffee pods it didn’t make itself. That promised obvious benefits to the company’s bottom line by locking in customers, but produced serious consumer backlash.

For more on the business of wine, watch our video:

But with its beer machine, Synek has gone in the opposite direction, introducing several add-ons that make it easier to use the machine with various beers, including homebrews.

The crowdfunding tracking site Kicktraq currently projects that the Somm will raise more than $1 million by May 10th, when the campaign ends. Those who reserve the Somm early will be getting a pretty nice discount on the $299 projected retail price.