How U.S. Businesses Can Tackle Inequality 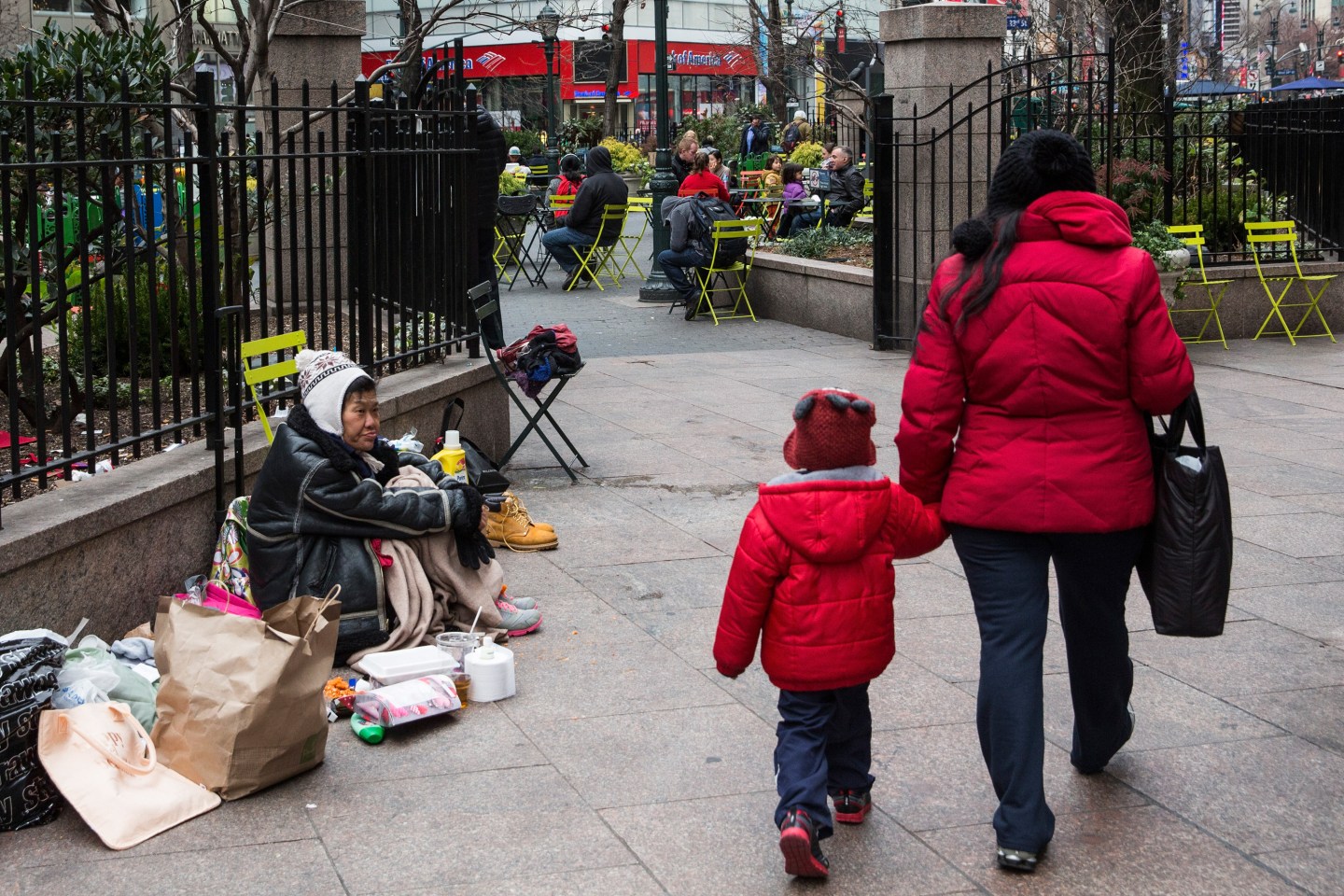 NEW YORK, NY - DECEMBER 21: A woman begs for change near Herald Square on December 21, 2015 in New York City. In the past five years New York's homeless population has ballooned from approximately 38,000 in October of 2010 to over 59,500 in October of 2015, according to Coalition for the Homeless. (Photo by Andrew Burton/Getty Images)
Photograph by Andrew Burton — Getty Images

The lack of opportunity has widened the gap between rich and poor today to levels that approach those of the 1930s – the highest on record, according to our new report, Tackling Economic Inequality, Boosting Opportunity. Some of that inequality stems from healthy byproducts of free enterprise, like spectacularly successful innovations and investments.

But what merits serious concern is the vast inequality and lack of opportunity that comes from the lagging growth in real incomes of working people. As shown below, the incomes in the bottom 80% of the population have grown less than 0.5% per year, on average, while the highest income groups have prospered.

There are deeply held differences over how to tackle this problem: should we equalize outcomes or create equality of opportunity?

We see equality of opportunity – fueled by the capabilities of free-market capitalism – as holding the most potential to bring Americans up the economic ladder. But with unprecedented technological change and competition from abroad, the equal opportunity roadmap needs revision. We have come up with a few ideas:

First, early education is the cornerstone of opportunity. Children from lower-income families typically have lower economic prospects, but full-day pre-K – even for just one school year – can boost their long-term earnings by 10%. Programs that start at birth can lift their earnings by up to 26%. We see what’s taking place at PNC Financial Services Group as a model. Begun in 2004, their Grow Up Great program has served over 2 million children throughout the U.S., through grants to organizations that support early learning in math, science, and the arts.

Along with early education, businesses can ease inequality – and simultaneously expand their talent pools – by helping employees obtain higher education. In 2013, median earnings for young adults with a bachelor’s degree alone were $48,500, compared with $30,000 for those with just a high school diploma. This gap will grow as automation continues to replace low-skilled labor and the economy puts an increasing premium on knowledge. In fact, current projections indicate that the U.S will fall short by 5 million workers with postsecondary education by 2020.

In collaboration with Southern New Hampshire University, Anthem Insurance (ANTM) recently began making associate’s or bachelor’s degrees available at no cost for 50,000 eligible workers. Another company, FedEx, partners with nearly 20 higher education institutions including Western Governors University. There, students pursue competency-based education, in which progress and degree completion depend on one’s understanding of subject material, not by time clocked in the classroom. As some skillsets lose their value, facilitating quick mastery of new ones prevents employees from falling behind.

Businesses also should look to re-employ the long-term unemployed, currently comprised of 2 million-plus people. The Great Recession dealt a major blow to their economic prospects: more than a third, for example, lived in poverty in 2012, compared to a quarter of the short-term unemployed. Current screening methods, like requiring high credit scores, are eliminating the long-term unemployed from job consideration. To date, over 300 companies have pledged to bring this group back into the workforce by adopting open-minded HR measures. Among them is Frontier Communications. They hired more than 250 of the long-term unemployed in 2014 alone by replacing the initial interview step, resume screens, with videos to observe firsthand an essential skill: how well applicants communicated. More companies need to follow suit.

But any comprehensive plan to ease inequality and boost opportunity must include public policy. A good start would involve Congress reforming America’s tax and health care policies.

Health care inflation, which has far outpaced overall inflation, has yielded higher insurance premiums and less take-home pay. Insurance premiums represent a larger share of compensation costs for low-wage than for higher-wage workers, so the least well-off are the most affected.

More health care competition, such as through a 50-state insurance marketplace and allowing all plans to compete on public and private exchanges, would make patients and providers more cost-conscious. We’ve seen before how competition can lower health care costs. Under the Medicare prescription drug plan (Medicare Part D), recipients shop and weigh the costs and benefits of plans. The consumerism built into the framework contributed to lower costs for the program – about 50% in 2013 – than the Congressional Budget Office projected when it became law in 2003.

On the tax front, policymakers should expand – and business leaders should champion – the Earned Income Tax Credit (EITC), which incents people to work by rewarding low-income working individuals, and does not increase employer costs or fuel inflation. The EITC enjoys widespread support from both parties and already has dealt a blow to inequality, helping lift over six million individuals out of poverty in 2013 alone. A $1,000 increase in credit could lead to a whopping 9.4 percentage point reduction in the share of families with incomes below poverty – about four million people.

Business leaders should champion steps that boost opportunity, like education, re-employing the long-term unemployed, and health care and tax reform, to help address inequality. In this way, the discussion over inequality can bring our nation together, not tear it apart.

Larry Thompson is a former executive vice president of PepsiCo and the current John A. Sibley Professor of Law at the University of Georgia, Patrick Gross is chairman of The Lovell Group, Bo Cutter is a senior fellow at The Roosevelt Institute. All three Co-Chair the Committee for Economic Development of The Conference Board’s (CED) Sustainable Capitalism Subcommittee.