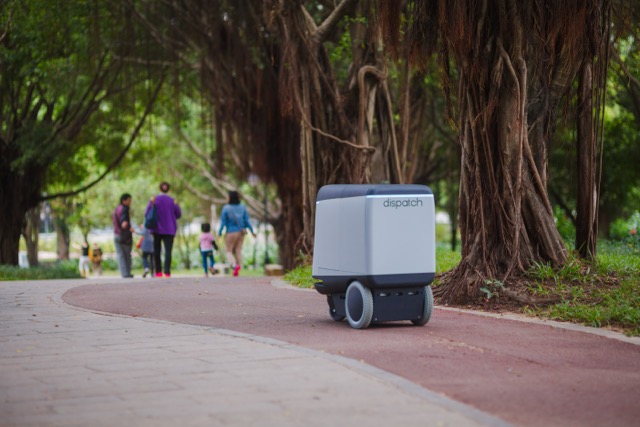 Someday your favorite burrito or fresh load of laundry could arrive to your door not via a friendly human courier, but a cute self-driving robot.

One startup, aptly named Dispatch, has been working for the last nine months on one such vehicle it has affectionately dubbed “Carry.” For now, Carry has been used in pilot programs on a couple of school campuses, where it mostly interacts with pedestrians and completes various kinds of deliveries. A mobile app lets customers interact with Carry, such as open one of its four compartments to grab their parcels, while a software tool will let its eventual customers easily send delivery orders to Dispatch’s fleet of these robots. Carry can transport up to 100 pounds.

“Essentially what we’re trying to do is build autonomous delivery infrastructure,” Dispatch co-founder Uriah Baalke told Fortune in an interview.

Instead of manufacturing and selling its robots to retailers or other companies, Dispatch plans to sell them access to its Carry vehicles and charge for their use, Baalke explained.

Not surprisingly, Dispatch has already spoken with a few so-called “on-demand” services—companies that deliver various items with the tap of a button—and large retailers about potential applications for Carry, though Baalke declined to name any of them. While autonomous driving technology has mostly been discussed in the context of cars to transport people, delivery is another obvious area. Companies from Google (GOOGL) to pizza chain Domino’s (DPZ) are already exploring how they can put self-driving robots to good use. Ride-hailing company Uber also has invested heavily in autonomous driving research, which it presumably wants to eventually use to power its own delivery services.

With that said, it remains to be seen if it’ll be able to get to the scale necessary to handle a major customer.

Dispatch isn’t the first to put self-driving vehicles on college campuses—startups Auro Robotics and Varden Labs are already piloting their autonomous shuttles on campuses, though they’re meant to ferry actual humans. And for all these companies, the real challenges will come when they want to take their vehicles out of familiar routes or highly controlled environments.

As it looks to grow beyond its current team of four (three co-founders and one early engineer), Dispatch said on Wednesday that it has raised $2 million in seed funding led by Andreessen Horowitz. Baalke founded the company with Sonia Jin and Stav Braun in 2015.