The 7 Crazy, Jaw-Dropping Foods Sold at Ballparks This Year 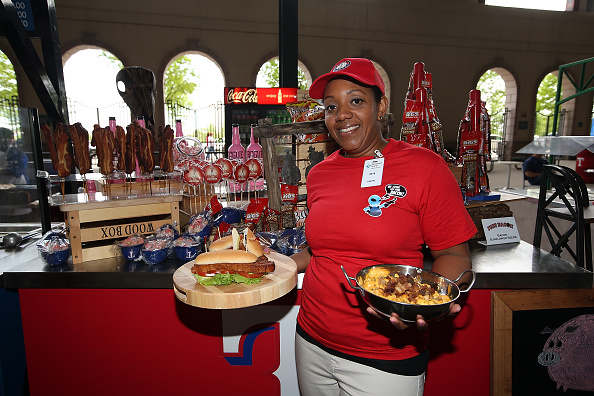 Crazy ballpark foods are just part of what Americans have come to expect.

At many baseball stadiums, the emergence of new and unusual concession stand offerings are part of the spring ritual. In fact, in the lead-up to this season, one minor league team held a tasting event followed by a fan vote to help determine their park’s new food items. The Phillies’ Triple-A affiliate the IronPigs even is changing their name to the “Cheesesteaks” for one game, and just came out with jerseys emblazoned with strips of bacon across the United States of America. (What’s next — a whole stadium named after fried food?)

Note: not all ballpark dishes go in the direction of over the top. New York’s CitiField, home of the Mets, for example, offers David Chang’s FUKU Spicy Fried Chicken Sandwich with habanero, pickles, and fuku butter. Sounds almost healthy. But that’s no fun.

This is, though: Some incongruous pairings this year are combinations that remind the viewer of …well… foods that have already been eaten separately and have all come back up together. Check out some of the new, jaw-dropping offerings this year:

No need to mince words: the Cheeseburger Dog ($10) is a giant hot dog made from cheeseburger. Need more description? Char-grilled hamburgers are ground up, mixed with chopped bacon, pickles, green onion, and cheddar cheese, formed into a foot-long tube and then frozen. They’re then breaded, seasoned and dunked in the deep fryer, and topped with more bacon, lettuce, tomato, and secret sauce.

Remember the origin story presented in 1980s commercials for Reese’s Peanut Butter Cups? Two snacking people collide while walking or roller skating and then, “Hey-- you got your peanut butter in my chocolate” was countered by, “You got your chocolate in my peanut butter.”

Well. This PNC Park conglomeration seems to have come about in a similar way. Maybe someone tripped coming down the stadium steps and their mac and ’Jacks went right onto someone’s footlong hot dog, which for some reason was on naan bread that also had salted caramel sauce on it.

Is the resulting CJMD five great tastes that taste great together? That’s up to the person who lays down $11 for this bad boy to decide.

The MVP of baseball stadium stunt foods has to be the Braves. They’ve outdone themselves this year, starting with this 20-ounce, $26 burger that has two 8-inch pepperoni pizzas as the bun.

Does that not sound filling enough? Because it also has five slices of cheddar cheese.

The $15 Everything Dog is a footlong hot dog on a pretzel bun replete with fries, chili, nacho chips, beer cheese, and jalapenos, with popcorn on top and squiggled over with Coca-Cola-infused barbecue sauce.

The Atlanta Braves Are Not Done with Your Arteries Yet

There are still more devilish offerings at Turner Field. The Tater Tot Chop consists of two waffles made out of pressed tater tots sandwiching bacon, melted cheese, and jalapenos, with Coca-Cola-infused ketchup.

The Punisher, see below,  is country fried smoked rib meat drenched in Monster Energy Drink-infused sauce and topped with an onion ring and “slawsa” on a bun.

And finally, in a knockoff of a state fair classic, the Sausage Sundae ($9) is a split smoked sausage topped with mac and cheese, mashed potatoes, and pulled pork with a cherry tomato on top.