The 11 craziest foods sold at ballparks this year 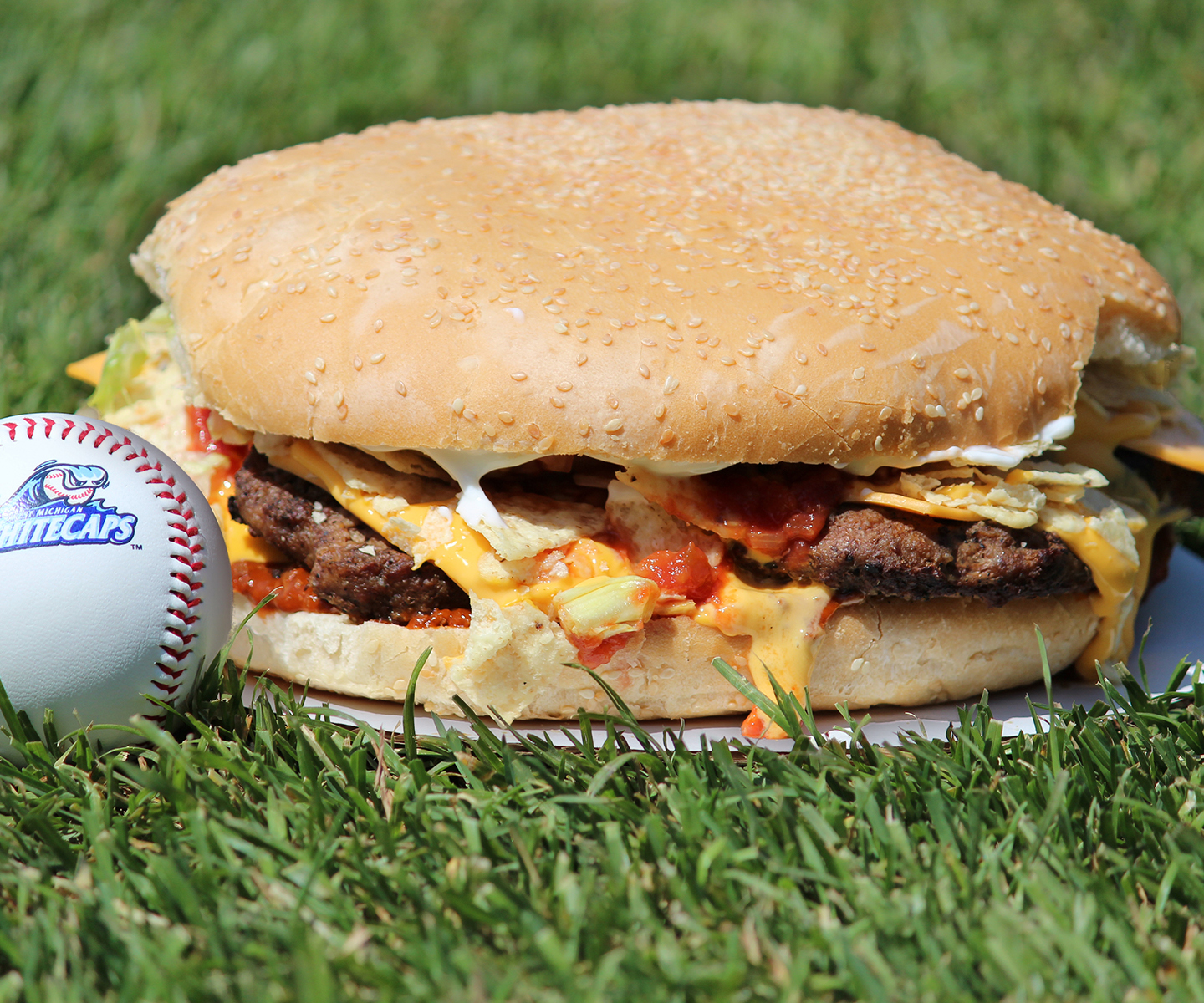 In recent Major League Baseball seasons, over-the-top ballpark foods have become their own attraction. These bombastic new recruits of the concession stands are often riffs on ballpark classics like the hot dog and hamburger, but they’re jacked up and deep fried into stunt food territory.

This season, the Wilmington Blue Rocks partnered with Krispy Kreme to unleash a hot dog with a glazed doughnut bun, which can be topped with bacon and raspberry jelly if you please. The MiLB team left the naming of this creation up to the fans, and whoever made the best suggestion won a prize package, including throwing the first pitch on opening night.

Here we have an 18-inch corn dog stuffed with cheddar cheese, jalapenos and bacon, and if that’s not filling enough, it also comes with fries. The whole shebang goes for $25 at the MLB team’s Chase Field.

Last year, the MLB’s Detroit Tigers Comerica Park (the same park that brought baseball fans the half-bacon, half-beef 50/50 Burger), presented a new $7 offering that’s like a hot dog wearing disco fries, but done in the style of their Canadian neighbors. They also offered three other messy dog styles: one topped with bacon, egg and cheese, one with pork and beans, and one with Coney Island chili and cole slaw.

This one is not a hot dog, but still a tubular meat and worthy of mention. Dempsey’s Brew Pub at the Baltimore Orioles’ stomping ground Camden Yards introduced The Walk Off ($16) in 2013, consisting of an Old Bay Roma sausage on a pretzel roll topped with Dempsey’s house-made Old Bay crab dip.

The Northwest Arkansas Naturals’ Arvest Ballpark began selling this funnel cake-ensconced dog on a stick in 2008 for a price that now seems quaint: $3.50. "Sometimes the best ideas happen by accident,” the MiLB team’s general manager Eric Edelstein said at the time. “This is one of those stories, and I'm confident you won't see this concoction anywhere else other than Arvest Ballpark.” Little did he know where ballpark dogs would go after that.

For $5, the minor league team Gateway Grizzlies’ GCS Ballpark serves Baseball’s Best Burger, a variant on the Luther Burger. This version is a deep-fried Krispy Kreme Original Glazed doughtnut used as a hamburger bun, with an Angus beef patty topped with cheddar cheese and bacon.  The Grizzlies have also offered Philly Cheesesteak Nachos.

Last season, the Tampa Bay Rays’ Tropicana Stadium presented the Fan Vs. Food challenge, offering  a pair of tickets to anyone who could put away their $30 four-pound burger...plus one pound of fries. The burger had eight 8oz patties, 32 slices of bacon, and at least eight slices of cheese. Sports Illustrated estimated the burger at 8320 calories, and that's without counting the fries.

The minor league West Michigan Whitecaps’ Fifth Third Ballpark offers this pile of food, weighing in at more than four pounds. The $20 Fifth Third Burger has five one-third-pound burgers (making five thirds of a pound), a cup of chili, five slices of American cheese, salsa, nacho cheese, Fritos, lettuce, tomato, sour cream and jalapenos. Anyone who can consume this bomb of 4,800-plus calories and nearly 300 grams of fat in one shot wins a T-shirt. The ballpark also sells the Baco, a bacon-encased taco.

New this season for Texas Rangers fans is this marshmallow flanked by Oreos on a skewer, breaded in graham crackers and deep fried, then drizzled with chocolate sauce ($8) and the park is also selling deep-fried battered corn on the cob, bacon cotton candy, and bacon beer. If this lineup seems especially dastardly, it’s because when it comes to attention-grabbing, artery-jamming concession items, the Texas Rangers have been around the bases a few times before.

In fact, they should be named MVP of stadium stunt food.  In 2012, they introduced the Boomstick ($26), which is two feet (one pound) of hot dog topped with chili, cheese, and onions (which you can get “Totally Rossome” for $32 topped with brisket, pico, sour cream, and Doritos), followed by the one-pound Beltre Buster burger topped in half a pound of bacon ($26).   In 2014 came the Tanaco two-foot beef and chicken taco ($26), the two-foot Kaboom Kabob ($13), and the Choomongous two-foot Korean beef sandwich ($26).

Last year, the Milwaukee Brewers’ Miller Park rolled out the Pulled Pork Parfait. This $7 creation consists of layers of mashed potatoes alternating with layers of pulled pork, and topped with gravy and chives. For $13, Miller Park also offers The Beast, a turducken-esque bratwurst stuffed with a hot dog, wrapped in bacon, topped with sauerkraut and onions, and served on a pretzel roll.

Combining two classic ways to cure a hangover (greasy food and hair of the dog), this $18 beverage was offered at the Twins’ Target Field last year. It featured a bacon double cheeseburger slider as garnish, among other garnishes like cheese cubes and the more traditional pickles and celery.

Note: This story has been updated to delete one of the foods -- the StrasBurger, which is no longer available. The headline has also been updated to reflect that these foods are available in both major league and minor league ballparks.