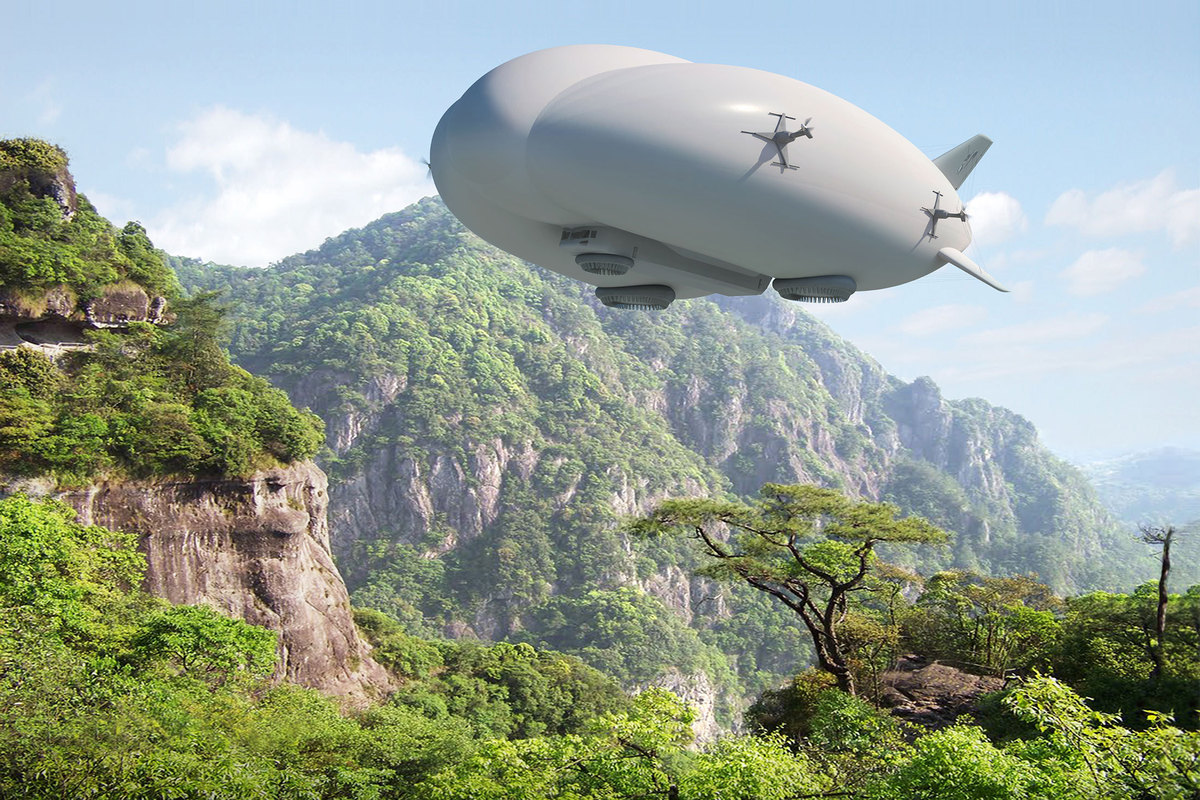 Lockheed Martin (LMT) has locked up its first order for as many as a dozen cargo-carrying hybrid airships, blimp-like aircraft that the company’s secretive Skunk Works lab has been developing for more than a decade.

U.K.-based Straightline Aviation (SLA) has agreed to purchase up to 12 of the vehicles for a collective $480 million, enabling the buyer to deliver cargo to remote locations that lack roads or other infrastructure.

Each of the helium-filled airships measures nearly a football field in length, can haul 20 metric tons of cargo (as well as 19 passengers plus crew), and can land or hover just about anywhere. SLA plans to target the oil, gas, and mining industries, which spend billions on logistics annually, building roads, helipads, and other infrastructure in order to manage moving equipment and personnel to far-flung corners of the world.

For years, Lockheed has positioned its hybrid airship—known as LMH-1—as a cheaper and more sustainable way to move cargo, spurring only lukewarm interest from potential customers. That’s changing as persistent low oil prices have altered business models at many of the world’s major oil and gas companies.

What was acceptable when oil was at $90 a barrel isn’t realistic anymore, SLA Chief Executive Officer Mike Kendrick told Bloomberg in an interview. SLA already has four to five customers ready to give the airships a chance once they’re finally in the air, he said.

The LMH-1 is the descendant of a Pentagon program that sought airships as a means of offering around-the-clock aerial surveillance over wide areas during the wars in Iraq and Afghanistan. That program fell victim to shrinking military budgets, a spike in helium prices, and the winding down of U.S. military activity in those conflicts. Lockheed has since spent more than $100 million tinkering with its airship designs, looking for the right size, capability, and markets.

It also marks the first time Lockheed’s experimental Skunk Works lab—the company’s Palmdale, Calif.-based facility that gave birth to the U.S. military’s U-2 and SR-71 Blackbird spy planes, among other iconic aircraft—has turned one of its creations loose in the commercial market.

At this point, it’s unclear exactly what that market is. Previous ventures have foretold an airship renaissance only to crash spectacularly, most recently when German company Cargolifter AG collapsed in 2002, losing hundreds of millions of investor dollars. The company’s 160-ton CL160 airship never got off the ground.

Both Lockheed and competitor Hybrid Air Vehicles believe the customers will come. Hybrid Air Vehicles unveiled its Airlander 10 last week, targeting the aircraft more toward the tourism market. SLA might extend into commercial passenger travel at some point in the future as well, though for now the company will focus on what it sees as low-hanging fruit in the oil, gas, and mining industries.

Lockheed can reportedly produce roughly one LMH-1 per month once production begins, and could develop a 90-ton variant by 2019 if adequate demand emerges. The company will begin delivering airships to SLA in 2018.