How Occupy Wall Street Led to the Rise of Donald Trump 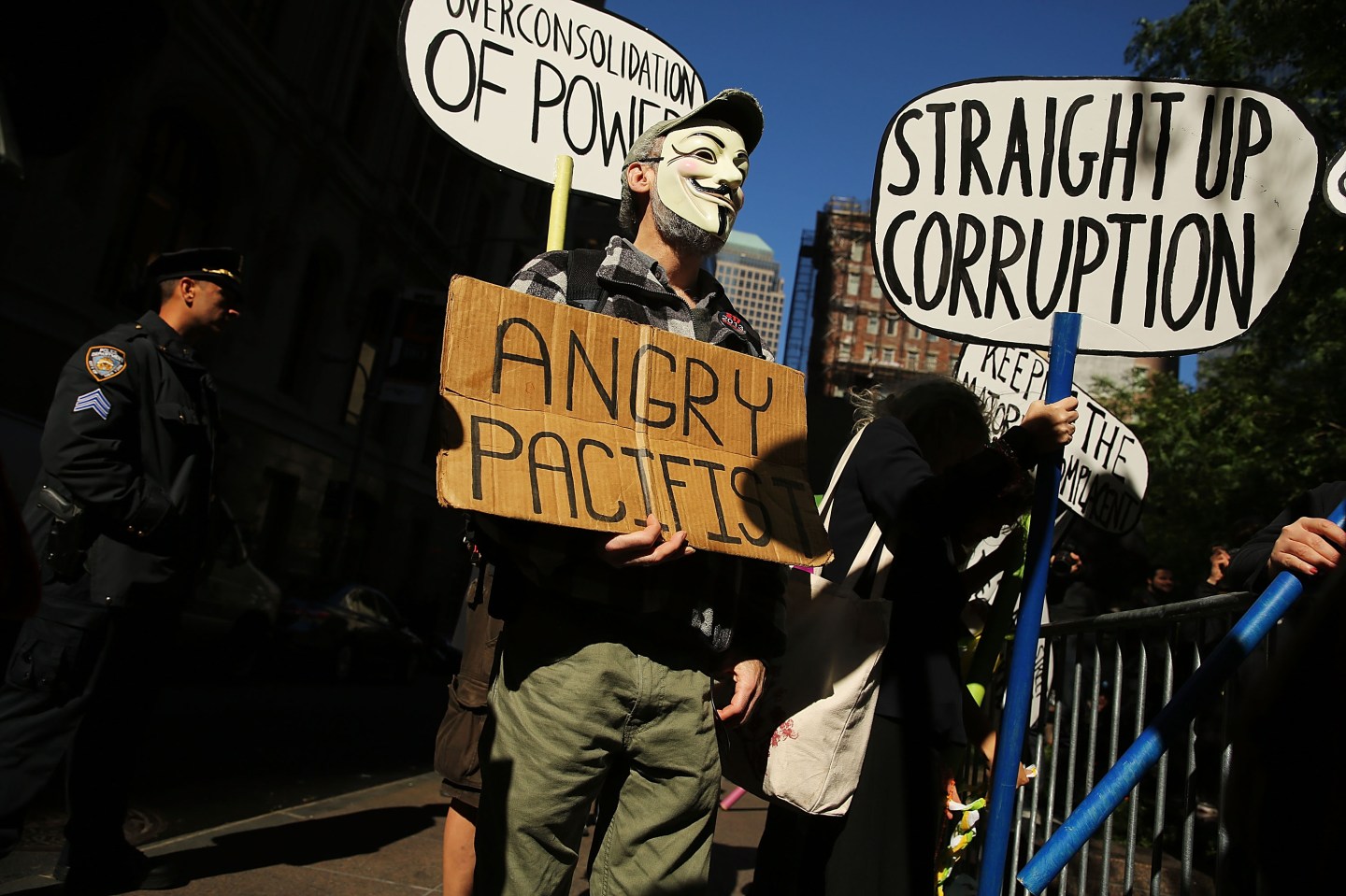 NEW YORK, NY - SEPTEMBER 17: Protesters affiliated with Occupy Wall Street demonstrate for a variety of causes at Zuccotti Park near the New York Stock Exchange on the second anniversary of the movement on September 17, 2013 in New York City. Numerous rallies and events across the city were planned for the movement which takes aim at inequality and financial greed and which has influenced activist moments around the world. While police presence was high in New York, with a helicopter flying above the park, no incidents had been reported by the afternoon. (Photo by Spencer Platt/Getty Images)
Photograph by Spencer Platt via Getty Images

Seven years ago, the Tea Party movement came into being, and since then has been an almost continuous thorn in the side of the Republican Party establishment. Just two years later, Occupy Wall Street burst onto the scene, using Zuccotti Park as a staging ground in New York City, spawning marches, demonstrations, and other protests in numerous cities in the months ahead. And despite their differences, the populist, anti-elite, and anti-establishment forces at work in both movements have manifested themselves in bold relief within the presidential campaigns of Donald Trump, Ted Cruz, and Bernie Sanders.

To be sure, the Tea Party and Occupy Wall Street-ers were in many respects, to pardon the pun, radically different. Tea Partiers tend to be heavily white (although not necessarily exclusively), conservative, and Republican Party identifiers or Republican-leaning independents. Their agenda was a fairly standard conservative emphasis on balanced budgets, debt reduction, Second Amendment rights, and more restrictive immigration policy, viewing illegal immigration through the lens of the rule of law or “not playing by the rules.” Tea partiers identify as strict constitutionalists (as defined by conservatives), with a fairly large measure of religious beliefs and unashamed traditional patriotism.

Most in the Tea Party movement would likely not be impressed by, or identify with, the more counter-culture-like denizens of Zuccotti Park (and elsewhere). Nor would those who participated in the activities surrounding Occupy Wall Street be swayed by the rural and suburban all-American types who make up the Tea Party.

But while different in many respects, both groups shared one common characteristic: a deep and abiding disdain—and even hostility—for the political elites and political establishment they believe betrayed them, betrayed the nation, and left them to fend for themselves. Yes, Tea Partiers are particularly bitter at what they see as an out-of-touch Republican establishment and an utterly arrogant federal bureaucracy, while Occupy Wall Street-ers have vented their frustration at what they see as the financial elites of Wall Street and multinational corporations, but the broader critique of American politics is not drastically different. For both groups, the founding principles of Republican government and representative democracy no longer work. The system, in their view, is broken.

And now, both the Tea Party and Occupy Wall Street have fallen on hard times. Occupy Wall Street no longer exists, though it has surely helped to spawn offshoots, including Black Lives Matter. The Tea Party is still around, but has seemingly faded in visibility, though it’s still more than capable of discouraging Republicans from negotiating compromises with Democrats on anything that touches on the bedrock principles of the movement.

Within the Republican Party, Trump and Cruz, to the horror of the party wise men, have accumulated more than 75% of the delegates to date, and won the vast majority of votes in the Republican primaries. The two leading voices of anti-establishment politics in the Republican Party have routed the party traditionalists, and one of them almost certainly will be the Republican nominee, as the “stop-Trump” movement seems to be running out of gas. On the Democratic side, it is Bernie Sanders, a 74-year-old, self-declared socialist who has taken on Hillary Clinton and the Democratic Party establishment. While having no chance to win, Sanders has unleashed forces that are unlikely to simply disappear after the election.

But it is Donald Trump who appears to have best captured the complex populist currents that are abroad in the land today. It is no surprise that Trump’s support defies easy ideological pigeonholing, and it is that in large part that makes the prospect of his nomination anathema to the Republican establishment and to the cultural and media elites who look down upon the kind of people who are most attracted to Trump’s candidacy: mostly white, not necessarily well-educated, and working class or struggling middle-class types who have tried to play by the rules and find themselves being given short shrift by those for whom they have voted, of both parties. They’re concerned about jobs and wages, and view their children’s future as grim. So when someone like Trump comes along and articulates a message that tells them essentially what they already know, why should anyone be shocked that he has emerged as a threat to the Republican establishment, and the political and cultural elites on the coasts? There was a hunger for someone to provide a message like what Trump is offering—that the cozy Wall Street-Washington nexus cares nothing about them and it is time to take matters into their own hands and reject the blandishments of those who have put them in the state they are in. It was Trump’s genius to be able to understand and articulate that message, and to articulate a message that obliterates the traditional liberal-conservative ideological cleavages.

This is why the 2016 election is so unpredictable. The Republican Party needs to face the simple fact that the kind of message it has been articulating leaves out vast swathes of the electorate for whom the standard fare they have offered election after election is no longer relevant, or at a minimum, is not enough.

While it may well be the case that Trump’s idiosyncrasies and limitations as a candidate will ultimately prove to be his undoing, and while all the smart money—contributions by elites, corporations, and banks—is on Clinton in the November election, the next several months may well be among the most earthshaking in our electoral history. Who would have thought a year ago that a loud-mouthed real estate tycoon and erstwhile reality television show star from New York would be able to articulate a message that may reshape the contours of American politics? It has happened before: Andrew Jackson was despised by the elites of the day, and so was William Jennings Bryan. Both found themselves at the head of movements larger than themselves, which ultimately helped reshape American politics. To dismiss Trump as simply a joke, or worse, some bigoted authoritarian, would be to make an enormous blunder. Whatever happens at the Republican convention, or in the general election, we ignore the voters (and Donald Trump’s message) at our own peril.

Dr. Euel Elliott is a professor of public policy and political economy and the senior associate dean in the School of Economic, Political and Policy Sciences at the University of Texas at Dallas.