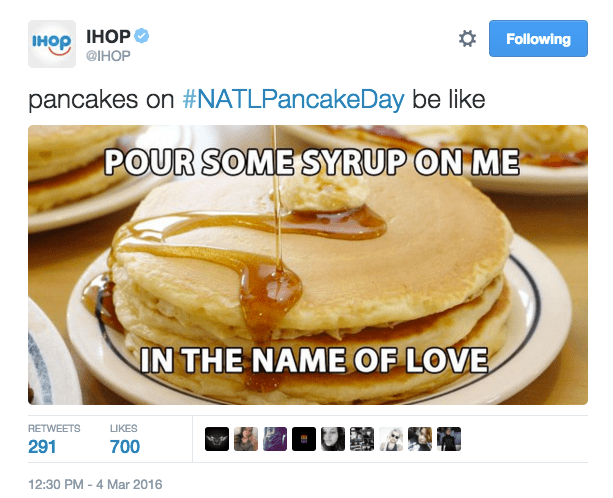 Saturday night in Cedar Rapids, Iowa circa 1997 presented certain problems for a teenager. We had driver’s licenses but nowhere to go. Many, in the city’s fine tradition, “cruised the ave”—driving back and forth across town, one mall to the other, checking out other “cruisers.” Cool kids went to parties. My friends and I usually wound up at the few places that were open 24-hours, where we could loiter late without spending much money. Occasionally we went to Kinko’s, but more often Denny’s, where they offered free refills on coffee (or pop, in my case) and a Grand Slam Breakfast at 1 a.m.

We didn’t have an IHOP, but if we had, we would have gone there.

A lot has changed since then. Cedar Rapids has an IHOP now, and kids have smartphones (who needs a car?) to entertain them, and yet the International House of Pancakes, that 58-year-old pioneer of all-day breakfast is bigger with the young folks than ever.

“The brand just resonates with them,” says IHOP President Darren Rebelez, who points out the chain’s all-day breakfast concept is fundamentally Millennial in spirit.

“It’s about different choices,” he says, before channeling the free-thinking 18-34 year old: “I want to do what I want to do when I want to do it. … Don’t tell me I can only eat breakfast food between 6 and 10 a.m.” Rebelez adds that 80% of IHOP’s fare is (and always has been) customizable.

Indeed, Millennials are breathing new life into the family dining chain, whose clientele, until recently, skewed older. Half of IHOP’s patrons are now under the age of 34, which is among the reasons the brand, which has some 1,600 restaurants in the U.S., has bucked the broader family dining trend, and grown in recent years. Same-restaurant sales at IHOP increased 4.5% in 2015.

Robert Byrne, a manager at the market research firm Technomic, says while the company does a brisk business with Millennials, it scores even more highly with Gen Z guests “who over-index for frequent visits to the chain relative to the family-dining segment.” It’s a “natural late-night alternative for those not yet of legal drinking age,” he explains, adding that they like the free wi-fi and the food.

Rebelez says unlike other companies, IHOP hasn’t even had to actively court these much sought after demographics: they just come. That said, the brand makes special efforts to tend to its younger customers.

For what it’s worth, most IHOP posts get hundreds, if not thousands of likes and retweets; last Tuesday, on National Pancake Day, the brand was mentioned 160 times per minute on Twitter according to Rebelez. Byrne says Millennials rate the flapjack chain’s advertising to be both “relatable and memorable.”

Freewheeling on social media is not always a formula for success—see US Airways or KitchenAid or Anthony Weiner—but Rebelez says IHOP has “good guardrails” in place, a well-thought-out strategy, and complete faith in MRM McCann, its social media agency. “We spent a lot of time making sure we’re completely synchronized,” he says. “We speak with the same voice.”

The company’s policy is to respond to every social media mention of IHOP—on Facebook, Twitter, Pinterest, SnapChat, Instagram and Tumblr—“good, bad or indifferent.” Anticipating big things on National Pancake Day, the company set up a social war room, with a staff of 15, to handle the traffic. (Despite the policy, IHOP has not yet responded to Gawker’s public plea that a 27-year-old waiter, arrested for giving away $3000 in free beverages at a Brooklyn IHOP, be exonerated.)

IHOP’s engagement has created a fiercely loyal corps of IHOP evangelists, says Rebelez. “Even if there’s a minor complaint, they’ll defend you. We’ll apologize for a screw-up, and everyone will jump to our defense.”

IHOP claims no social media firestorms, though the brand did last October take heat and apologize for “tweeting something dumb and immature.” (A platter of pancakes was captioned with: “flat, but has a GREAT personality.”)

Earlier today we tweeted something dumb and immature that does not reflect what IHOP stands for. We're sorry.

But, social media is only one part of IHOP’s campaign to commune with Millennials. They’re opening outlets near college campuses, sprucing up restaurants with youthful amenities (high-top community tables, wifi outlets), and innovating the menu with dishes like the croissant waffle, or the Criss-Croissant. Chances are that name means a little more to you if you were a tween in the ‘90s, which is exactly the point.