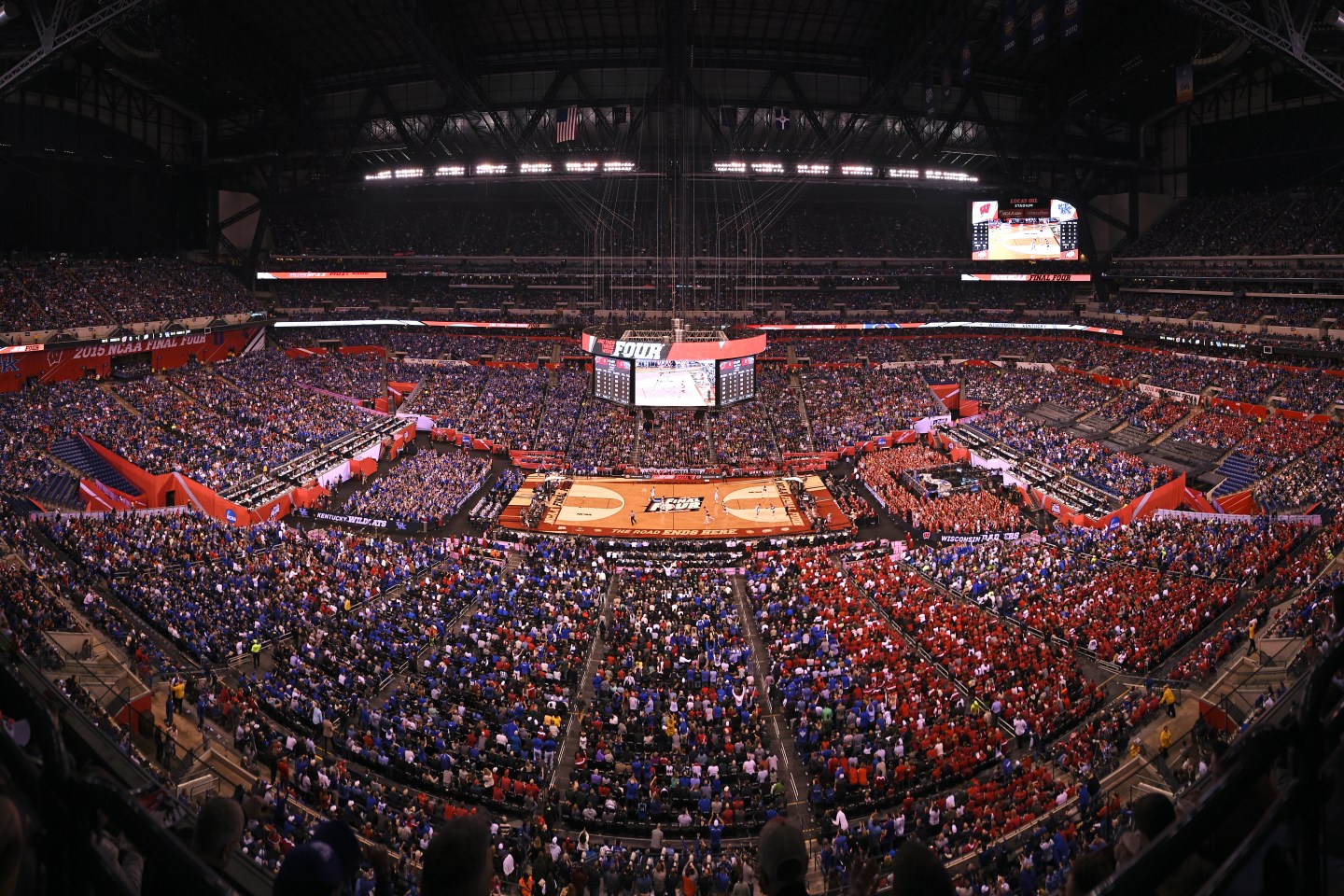 INDIANAPOLIS, IN - APRIL 04: (EDITORS NOTE: Image is a digital panoramic composite.) A general view during a game between the Wisconsin Badgers and the Kentucky Wildcats during the NCAA Men's Final Four Semifinal at Lucas Oil Stadium on April 4, 2015 in Indianapolis, Indiana. Wisconsin won 71-64. (Photo by Lance King/Getty Images)
Photograph by Lance King — Getty Images

You’ve got your March Madness bracket in one hand, and your school jersey in the other. But if you want to actually see some live college basketball games, here are some tips for scoring the best tickets.

Firstly, this is a marathon, not a sprint: the NCAA tournament is a month-long, winner-takes-all race to the trophy, ending up inside the NRG Stadium in Houston, Texas, on April 2 and 4. The venue is no stranger to the Final Four—it last hosted the four-team extravaganza in 2011.

If you’re hoping to get tickets for the Final Four, but don’t want to splurge, one way is to buy tickets solely for the National Championship game instead of the semifinals. “The National Championship game is always cheaper than the semifinals, although of course, that makes sense since it is only one game versus two games,” Chris Leyden, analyst for online ticket marketplace SeatGeek, told Fortune.

However, the NCAA tournament is made up of the rabid fanbases of 64 teams, and that means a whole lot of sites and traveling for those interested in catching their squads in action. The list of this year’s tourney sites are here, and with Selection Sunday done, here are some tips from SeatGeek on what to remember when getting the best value on your March Madness game tickets:

Local teams have a huge impact on demand. Last season, the three most expensive locations in the early rounds were Seattle, Omaha, and Louisville. Why? Because ticket prices are driven by “local teams,” which are teams whose campuses are relatively near those host cities. For example, Seattle was largely driven by demand from Gonzaga fans, Omaha by demand from fans of Kansas, Wichita State and Wisconsin, and Louisville by fans of Kentucky. “College basketball fans are more than willing to take short road trips to see their teams in the NCAA Tournament,” said Leyden. So if you want cheaper tickets, you’ll need to eye venues with as little local teams as possible.

Smaller fan bases can lead to bargain prices. At last year’s tournament, the first sessions in both Louisville and Jacksonville had average resale prices of below $60 on SeatGeek, a great deal compared to other locations. This probably was down to the eight teams playing: SMU, UCLA, UAB, Iowa State, Xavier, Ole Miss, Baylor and Georgia State. All of them—other than UCLA—are regarded as smaller schools or ones with less prominent major-conference cachet, yet that doesn’t mean the quality of the games will be diminished. Last year’s upset by Georgia State over Baylor featured a down-to-the-wire shot, and was regarded as one of the standout games of the tournament.

Full strip packages may not be a smart investment. Think of “full strip” packages as a bundle of all the NCAA tournament games played at the site, versus buying individual sessions of much fewer games. While it sounds like great value, appearances may deceive: in six of the eight locations last year on SeatGeek, buying each session individually ended up being cheaper in a sum total than buying the all-in-one package. “Even if you are a fan who is planning to attend all three sessions, it may be wiser to purchase each session individually,” said Leyden.

The Sweet 16 and Elite Eight can be very reasonably priced. Think that tickets to the later rounds would be more expensive? Not necessarily. Last year’s East Regional Final in Syracuse, said Leyden, had an average resale price of $74, far lower than most of the first and second round sessions. You should especially keep an eye out for the Sweet 16 and Elite Eight for value scores.

Wait to buy regional tickets. For last year’s March Madness, SeatGeek compared the median listing prices on Selection Sunday with the prices listed on the day before the actual game, and discovered an interesting trend. On the day before the games, the listing prices had dropped an average of 27% for the Sweet 16, and an average of 36% for the Elite 8.

How is that possible? “Upsets are sure to knock the expected teams out of the picture,” said Leyden. “If last year’s tournament is any indication, even if you are supremely confident your team will make the regional, it still may save you some money to wait until much closer to the games to buy tickets.” This year’s tournament is thought to be especially unpredictable, and that means you could be buying up unwanted tickets at discounted prices. Just remember not to cry over your spoiled bracket.