Fukushima’s Ground Zero: No Place for Man or Robot 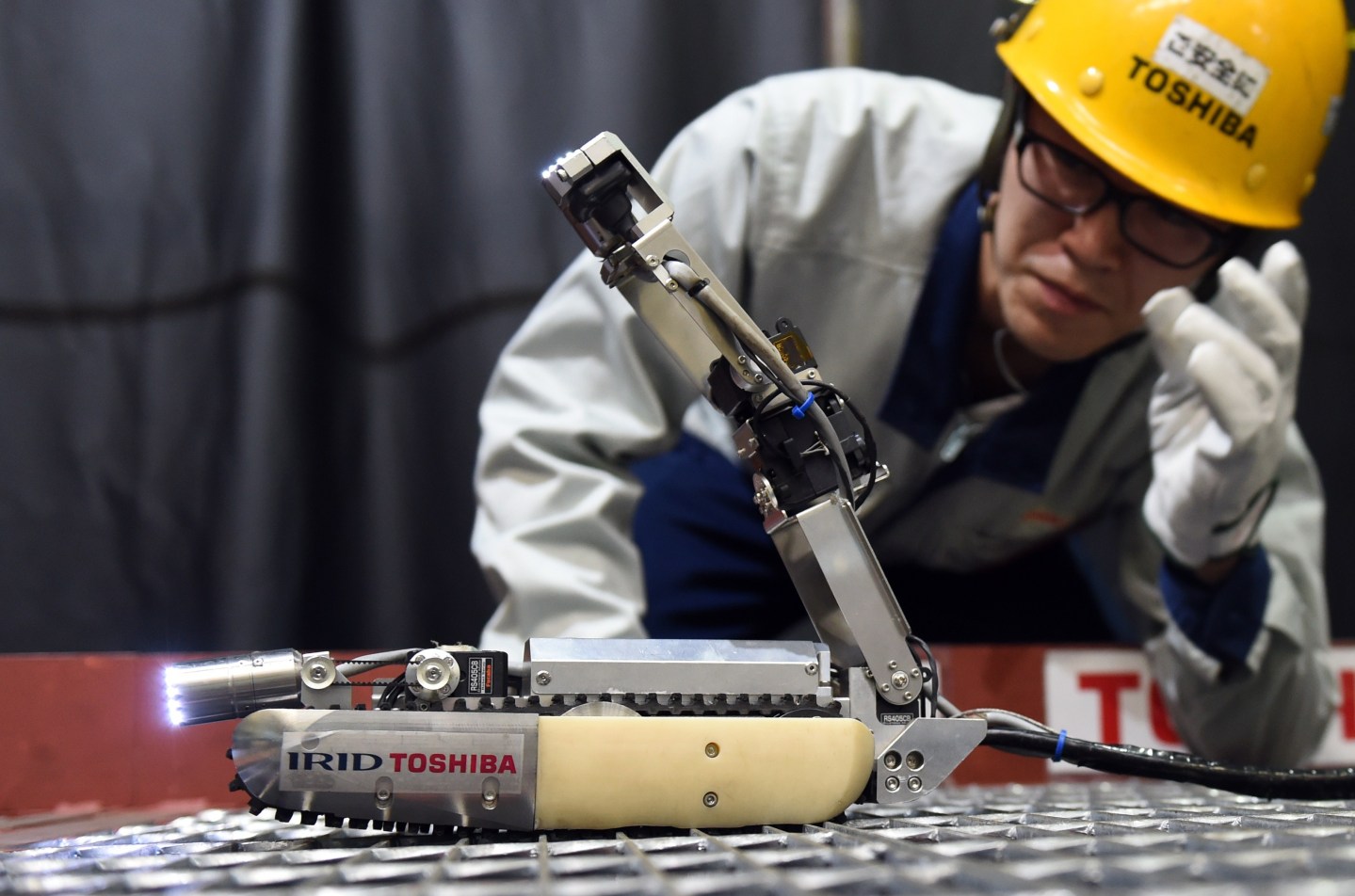 A Toshiba engineer watches a small robot with two CCD cameras developed by Toshiba Corporation and the International Research Institute for nuclear Decommissioning (IRID) moving during its press preview at a Toshiba factory in Yokohama on June 30, 2015. The 54-cm-long and 9-cm-hight and wide robot had developed to investigate the interior of the primary containment vessel (PCV) of Fukushima Daiichi Nuclear Power Station Unit 2. AFP PHOTO / TOSHIFUMI KITAMURA (Photo credit should read TOSHIFUMI KITAMURA/AFP/Getty Images)
Photograph by Toshifumi Kitamura — AFP/Getty Images

The robots sent in to find highly radioactive fuel at Fukushima’s nuclear reactors have “died”; a subterranean “ice wall” around the crippled plant meant to stop groundwater from becoming contaminated has yet to be finished. And authorities still don’t know how to dispose of highly radioactive water stored in an ever mounting number of tanks around the site.

Five years ago, one of the worst earthquakes in history triggered a 10-meter high tsunami that crashed into the Fukushima Daiichi nuclear power station causing multiple meltdowns. Nearly 19,000 people were killed or left missing and 160,000 lost their homes and livelihoods in the quake and tsunami.

Today, the radiation at the Fukushima plant is still so powerful it has proven impossible to get into its bowels to find and remove the extremely dangerous blobs of melted fuel rods, weighing hundreds of tons. Five robots sent into the reactors have failed to return.

For more on robotic tech, watch:

The plant’s operator, Tokyo Electric Power Co. (Tepco), has made some progress, such as removing hundreds of spent fuel roads in one damaged building. But the technology needed to establish the location of the melted fuel rods in the other three reactors at the plant has not been developed.

“It is extremely difficult to access the inside of the nuclear plant,” Naohiro Masuda, Tepco’s head of decommissioning said in an interview. “The biggest obstacle is the radiation.”

The fuel rods melted through their containment vessels in the reactors, and no one knows exactly where they are now. This part of the plant is so dangerous to humans, Tepco has been developing robots which can swim under water and negotiate obstacles in damaged tunnels and piping to search for the melted fuel rods.

But as soon as they get close to the reactors, the radiation destroys their wiring and renders them useless, causing long delays, Masuda said.

Each robot has to be custom-built for each building.“It takes two years to develop a single-function robot,” Masuda said.

Tepco, which was fiercely criticized for its handling of the disaster, says conditions at the Fukushima power station, site of the worst nuclear disaster since Chernobyl in Ukraine 30 years ago, have improved dramatically. Radiation levels in many places at the site are now as low as those in Tokyo.

More than 8,000 workers are at the plant at any one time, according to officials on a recent tour. Traffic is constant as they spread across the site, removing debris, building storage tanks, laying piping and preparing to dismantle parts of the plant.

Much of the work involves pumping a steady torrent of water into the wrecked and highly radiated reactors to cool them down. Afterward, the radiated water is then pumped out of the plant and stored in tanks that are proliferating around the site.

What to do with the nearly million tons of radioactive water is one of the biggest challenges, said Akira Ono, the site manager. Ono said he is “deeply worried” the storage tanks will leak radioactive water in the sea—as they have done several times before—prompting strong criticism for the government.

The utility has so far failed to get the backing of local fishermen to release water it has treated into the ocean.

Ono estimates that Tepco has completed around 10 percent of the work to clear the site up – the decommissioning process could take 30 to 40 years. But until the company locates the fuel, it won’t be able to assess progress and final costs, experts say.

The much touted use of X-ray like muon rays has yielded little information about the location of the melted fuel and the last robot inserted into one of the reactors sent only grainy images before breaking down.

Tepco is building the world’s biggest ice wall to keep groundwater from flowing into the basements of the damaged reactors and getting contaminated.

First suggested in 2013 and strongly backed by the government, the wall was completed in February, after months of delays and questions surrounding its effectiveness. Later this year, Tepco plans to pump water into the wall – which looks a bit like the piping behind a refrigerator – to start the freezing process.

“The reactors continue to bleed radiation into the ground water and thence into the Pacific Ocean,” Gundersen said. “When Tepco finally stops the groundwater, that will be the end of the beginning,” referring to the water flowing into the leaking basements of the reactor buildings.

While he would not rule out the possibility that small amounts of radiation are reaching the ocean, Masuda, the head of decommissioning, said the leaks have ended after the company built a wall along the shoreline near the reactors whose depth goes to below the seabed.

“I am not about to say that it is absolutely zero, but because of this wall the amount of release has dramatically dropped,” he said.