How Trump and Friends Could Learn a Few Things From Mr. Spock 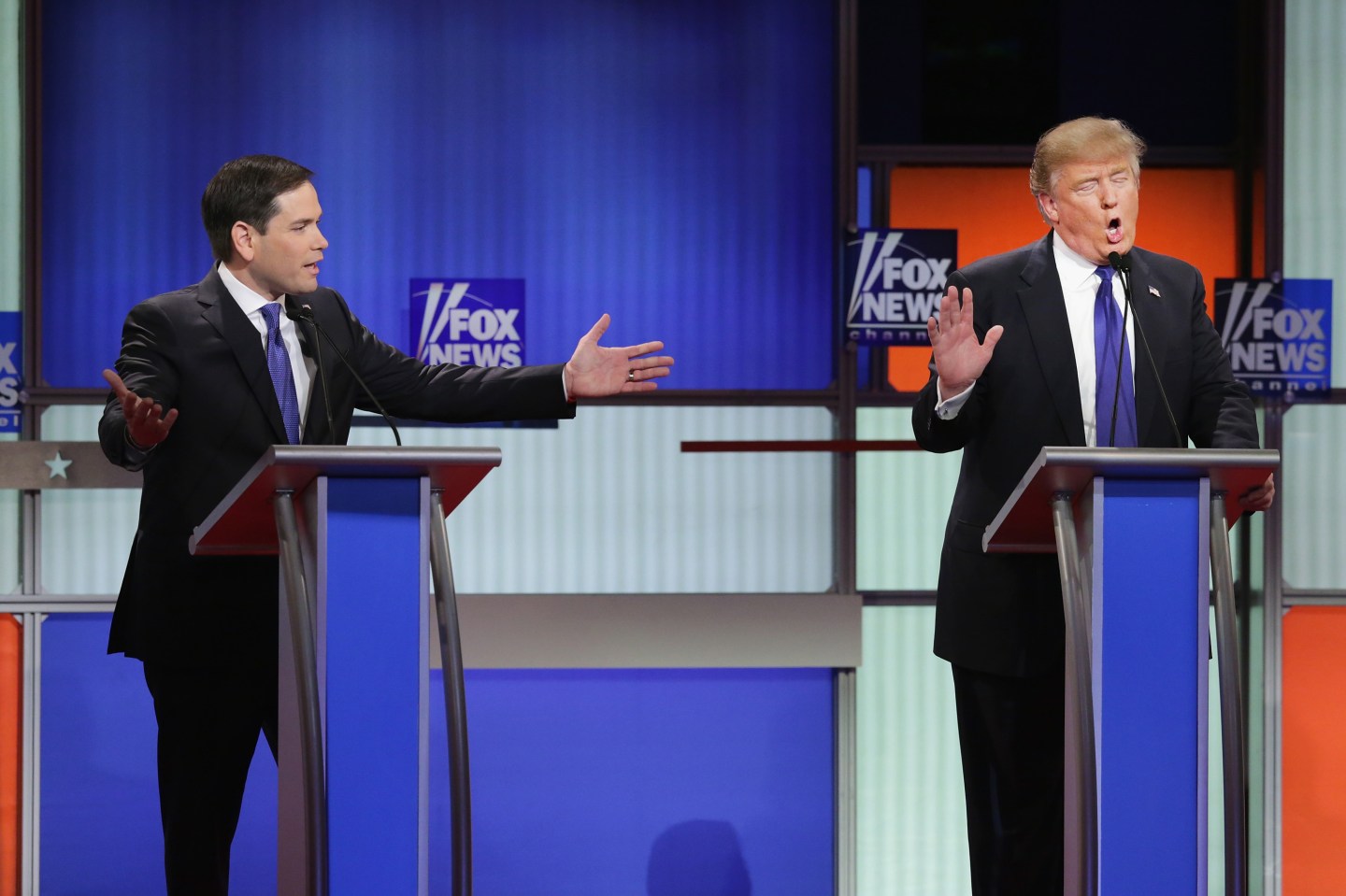 Most of the criticism directed at Donald Trump and others running for president has focused on the factual errors and lofty promises they have made. But little attention has been paid to their fallacious arguments, and it is time to correct these abuses of logic.

An argument is an attempt to establish the truth about a belief; fallacious arguments appear to do this but don’t. Since all of the political candidates claim to be making truthful statements, it’s crucial that we voters understand when their arguments don’t hold up to scrutiny.

While there are dozens of types of fallacies, we have room to highlight only a few here. And to show that I’m not playing favorites, I’ll give examples of fallacies each of the leading candidates has made and, in some cases, continues to make.

Ad hominem arguments are personal attacks that have nothing to do with the truth of the target’s statements. Donald Trump uses this technique in practically every speech he gives. Senator Marco Rubio’s height is irrelevant to his assertion that Trump’s clothing business hires workers outside of the U.S. That claim would be just as true or false if Rubio towered over Trump in a game of one-on-one basketball (which, truth be told, might be a healthier way of settling their disagreements).

Since he has been on the receiving end of Trump’s insults and knows their irrelevancy firsthand, one would expect Rubio to avoid making such attacks himself. But he has given in to the urge to use them, too. As long as he remains in the race, it would behoove Rubio to make the strongest possible case for why his knowledge and skills make him the best person to lead our country. Personal swipes at Trump don’t do that.

In this fallacy, one attempts to justify one’s beliefs by appealing to a powerful figure. On the March 6 edition of Face the Nation, Hillary Clinton spoke about the retroactive classification of more than 2,000 emails she sent on her personal server while Secretary of State. “Colin Powell summed it up well,” she told host John Dickerson. “He was told that some of his emails from more than 10 years ago were going to be retroactively classified, and he called it ‘an absurdity.’”

If reclassifying old emails is wrong, it’s because it’s unconstitutional, or because it’s a violation of FBI policies, or something else intrinsic to the activity itself, not because a respected person has so declared it.

Here, a word or concept with two meanings is used one way in one context and another way in another context. Philosopher Gregory Sadler notes that Senator Ted Cruz uses this type of fallacy when he criticizes Trump’s position on Planned Parenthood.

This organization, according to a Cruz TV advertisement, “treats the unborn like another form of currency.” The ad then states that “Donald Trump defends Planned Parenthood,” and to support this claim, we see a clip of Trump telling Sean Hannity, “Planned Parenthood serves a good function… We have to look at the positives.”

There are many legitimate ways for Ted Cruz to criticize Donald Trump, but equivocation isn’t a logical or ethical way to do it.

Another fallacious argument is the so-called Straw Man, in which an opponent’s position is exaggerated and thus made easy to knock down. On the issue of gun control, here is what Senator Bernie Sanders said about Hillary Clinton and other critics during MSNBC’s Democratic Presidential Candidates Forum:

[V]ery strong gun control advocates may not get everything they want. And people who think they should have a missile launcher in their backyard as a Constitutional right may not have that.

Sanders gave a great sound bite and a vivid image. But no one is seriously arguing for the right to have a backyard missile launcher. Sticking to the facts may make for boring television, but grand entertainment is not what political debates should be about.

There are other abuses of logic that strictly speaking aren’t fallacious but should be avoided nevertheless. One such abuse is inconsistency. For example, during the Republican debate on March 2, Ted Cruz addressed the issue of same-sex marriage and adoption this way:

By using the phrase “five unelected judges,” Cruz is indicting the U.S. Supreme Court as an institution with undeserved power to interpret the law. But if you’re going to take such a position, it’s inconsistent to defer to the same body on other occasions. On his official website, for example, Cruz notes that he has written 70 Supreme Court briefs and made nine arguments there.

Either the Supreme is a legitimate institution or it isn’t. You can’t have it both ways.

There are several ways in which leaders can get their points across. They can use brute force, as the heads of ISIS, Boko Haram, and other fascist states do.

Less extreme but still problematic are politicians like France’s Marine Le Pen who use fear appeals and other abuses of logic to advance their agendas.

At the other end of the moral spectrum sit democracies like ours, which are founded on the idea that rational discourse—not violence, bullying, or name-calling—is the best way to solve problems.

If the people seeking the most powerful office in our country really believe that the way we tackle challenges is superior, then they ought to use the essential tools of democracy—reason and logic—and eschew fallacious arguments like the ones we’ve discussed here. In the words of Mr. Spock, to do it any other way would be highly illogical.

What are some other fallacies you’ve observed in the news? Leave a comment below, and I may cite you in a follow-up column on the topic of fallacies.