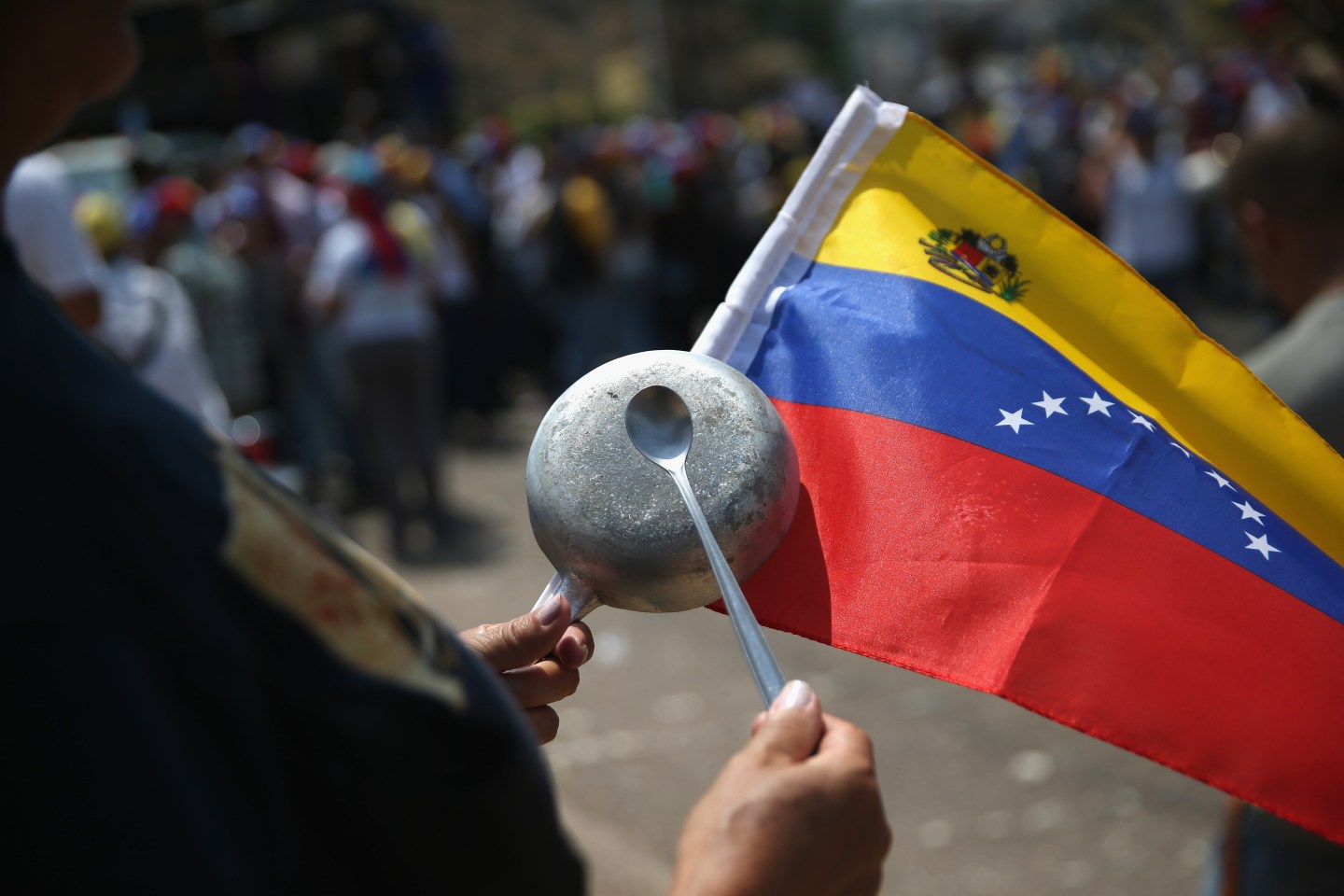 Venezuela has settled debts with at least three global drug companies by giving them bonds that trade at a heavy discount, a further sign of the OPEC nation’s worsening financial crisis.

Novartis, Bayer, and Sanofi acquired dollar-denominated bonds from state-owned oil company PDVSA that they resold for as little as a third of their face value, according to a Reuters analysis of regulatory filings and sources with knowledge of the situation. This contributed to some $500 million in foreign exchange losses that the three companies suffered in Venezuela in 2015. The extent of the bond transactions has not been previously reported.

The payment method provided a shortcut around the country’s troubled 13-year-old currency control mechanism. The system is widely regarded as a primary cause of runaway inflation, a deep recession and chronic product shortages that have afflicted Venezuela‘s economy under socialist President Nicolas Maduro.

Companies are required to sell products in bolivars but then struggle to convert them into hard currency through the government’s currency board.

Venezuela tries to use an official exchange rate of 10 bolivars to the dollar for priority goods such as food and medicine. The rate is the result of a devaluation last month from the previous rate of 6.3 bolivars.

However, Venezuela, which gets nearly all of its foreign exchange from oil exports, has had fewer dollars to disburse as a result of the crash in oil prices in the past two years. That has left it without enough dollars to pay down debts to pharmaceuticals companies at the preferential exchange rate.

Few of the alternatives are palatable. They include holding a rapidly deteriorating currency or using a much weaker official exchange rate of 206 bolivars to the dollar. The black market rate is close to an extraordinary 1,100 bolivars to the U.S. dollar, valuing the Venezuelan currency at less than 1 percent of the official rate.

Novartis said it agreed to acquire PDVSA bonds with a face value equivalent to the amount it was owed, and later sold them at a roughly two-thirds discount. Novartis reported a loss of $127 million on its sale of PDVSA 2024 bonds, leaving it with proceeds of just $73 million from the operation. The bonds currently trade at about 31 cents on the dollar, with a yield of 27 percent.

Neither Bayer nor Sanofi provided details on their bond transactions, but sources familiar with the situation said they accepted similar steep discounts. They declined to comment on whether they had any other option for repatriating their funds.

A fixed-income trader who follows the Venezuelan market said he noticed heavy selling of the PDVSA 2024 bonds starting in January, and estimated that more than $500 million of the bonds flooded the market.

This coincided with a sharp drop in the price of the bond, which fell to 25 cents in the dollar from 37 cents. The trader added he did not think financial institutions would have sold the bonds at such low prices. It is unclear whether this was directly related to selling by the drug companies.

Investors who track Venezuela say the deals makes sense for the companies despite the losses. The bond purchases represented a chance to get dollar denominated assets, even ones that had to be sold at a heavily discounted price.

At the black market rate, Novartis would have been left with only a tiny sliver of what it was owed.

Sanofi in 2015 recorded a currency loss of 240 million euros or $264 million associated with its Venezuela operations. A spokesman said this was the result of “a variety of payment means including dollar-denominated bonds.”

In early 2015, several big drug companies were still holding out to convert their bolivars into dollars at the most favorable exchange rate permitted by law, U.S. regulatory filings show. In a typical disclosure, Pfizer Inc, for example, said last May that it continued to believe that the nature of its business, shipping medicine to Venezuela, would qualify for the most preferential rates.

Last month, Pfizer said it expects an $800 million “negative impact” related to Venezuela in 2016, but did not immediately respond to questions about whether it was involved in any Venezuelabond transactions.

Buying bonds to obtain hard currency assets has so far mostly been a path used by foreign multinationals. A proposal by Venezuela‘s principal industry association for a similar mechanism for local companies to settle debts with foreign providers has so far gained no traction.

Two sources in the Venezuelan food industry, which has struggled to maintain operations due to a lack of imported raw materials, told Reuters that they would not accept an arrangement in which their providers were required to assume such heavy discounts. They insisted that the government should fully pay off those debts.

Venezuela in March 2013 used a similar scheme to settle debts with oil services companies, including Weatherford International Ltd., which said it received bonds from PDVSA that year in exchange for unpaid bills. It said it sold them for around half their face value.

Venezuela‘s bond-payment offers mirror a similar scheme in 2010 by Greece in which Athens settled billions of dollars in debts to pharmaceuticals companies with zero-coupon bonds issued specifically for that purpose. With Greece at the height of its debt crisis, the bonds quickly fell to around half of their face value and the drugmakers sold them at a substantial discount.

Greece’s situation was simpler, however, given that it did not have exchange controls and the debts were denominated in the widely-used euro currency.

At a least a dozen major U.S. companies, including Procter & Gamble, Pepsico, Colgate Palmolive, Kimberly-Clark, and Mondelez International, have deconsolidated their operations in Venezuela, resulting in several billion dollars in write downs over the past year. The accounting maneuver largely insulates their consolidated financial results from Venezuela‘s economic turmoil.

Drugmaker GlaxoSmithKline in 2015 reported a $130 million Venezuela foreign exchange loss after switching to a 200 bolivar per dollar exchange rate, 97% weaker than the official rate it had previously used.

Merck & Co in 2015 reported an $876 million foreign exchange loss related to Venezuela. The firm declined to comment when asked if this was related to bond operations.

Venezuelan bonds are the riskiest of any issued by an emerging market nation, according to the JPMorgan Global Diversified Emerging Markets Bond Index. They pay on average some 31 percentage points more than similar U.S. Treasury bills, nearly triple that of war-torn Iraq.

Investors worry PDVSA will be unable to meet heavy debt service of around $7.5 billion between March and December unless there is a major rebound in crude oil prices.

Maduro dismisses default talk as a right-wing smear campaign. Government officials note that the neither the country nor state oil company PDVSA have missed a bond payment under the ruling Socialist Party.