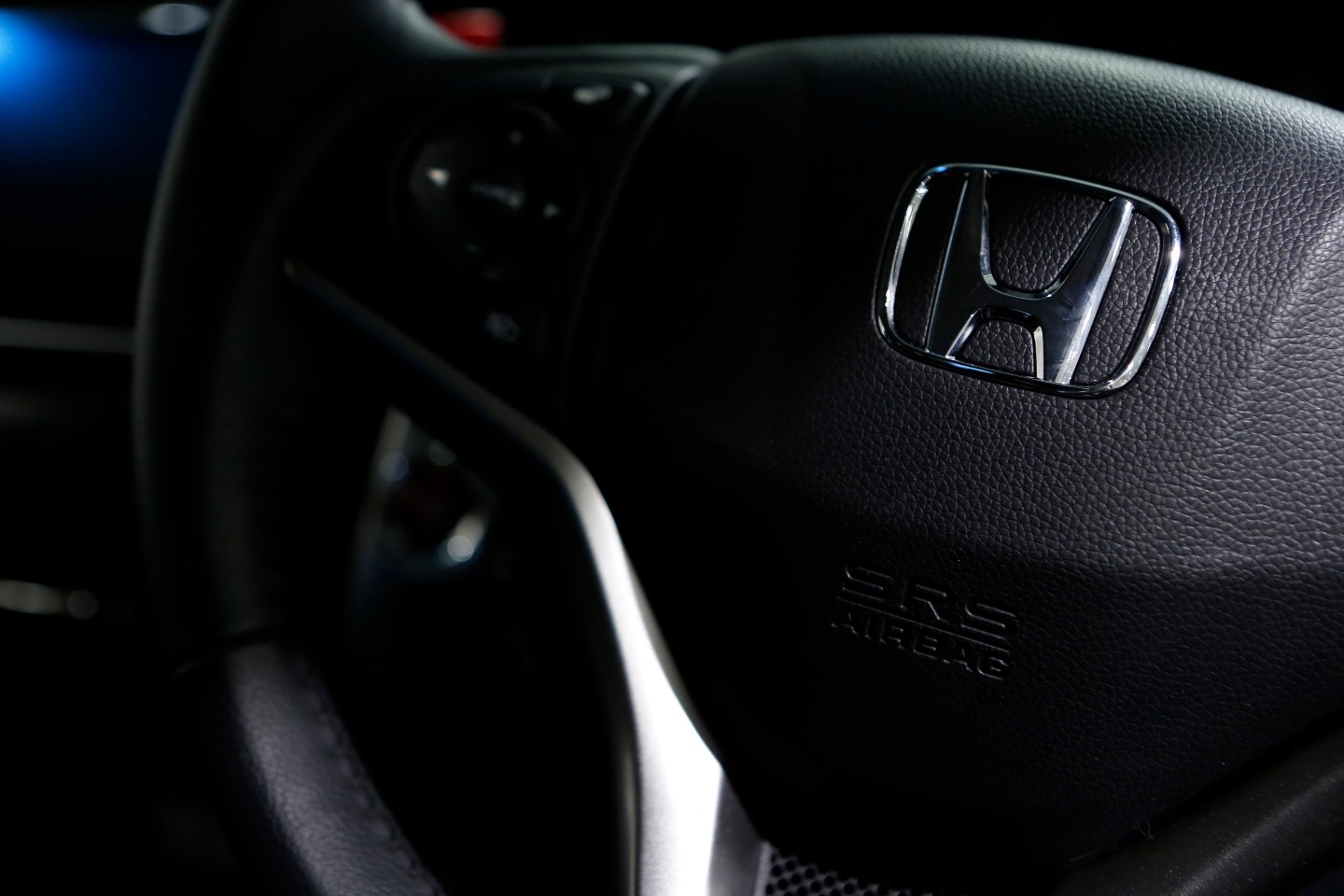 A Honda Motor Co. badge and airbag unit for the driver's seat are seen on the steering wheel of a Grace Hybrid sedan displayed in a showroom at the company's headquarters in Tokyo, Japan, on Friday, Jan. 30, 2015. Honda, Japan's third-largest carmaker, cut its profit forecast for the second time this year as recall costs mount. Photographer: Kiyoshi Ota/Bloomberg via Getty Images
Photograph by Kiyoshi Ota — Bloomberg via Getty Images

Honda Motor on Wednesday said it aimed for new-energy vehicles to account for two-thirds of its line-up by 2030 from around 5% now, as increasingly stringent global emissions regulations prompt automakers to make greener cars.

Plug-in hybrids—which can also be recharged via household wall sockets—will be “at the core of electrification in the future” for Honda, said Chief Executive Takahiro Hachigo.

Honda (HMC) will release a plug-in hybrid in North America by 2018 that shares the same production platform as its Clarity FCV announced in October, Hachigo said. It will then make plug-in versions of its major models and raise model numbers, he said.

Behind the push are governments globally rapidly raising emissions standards. But limited infrastructure such as charging stations make some green cars a hard sell, while low oil prices have sparked demand for sport utility vehicles and other petrol-guzzlers.

Honda’s new-energy target featured in the automaker’s strategy update, the first under Hachigo. The CEO, who assumed the job almost a year ago, has restructured personnel and operations to revitalize research and development (R&D).

“Our appointment of a new head of the R&D center is intended to position R&D at the center of all product development, and make it responsible for the design and performance of each and every vehicle,” Hachigo said on Wednesday.

The strategy update also included a shift to standardized vehicle platforms to increase production flexibility—in line with an industry trend—and a focus on global models such as the Fit compact, Civic and Accord sedans.

“The key to improving sales is our global models … which are so central to the company’s brand. If we develop these models to raise their appeal, it will translate into higher sales,” Hachigo said.

Separately, Honda repeated at the strategy update that it did not plan to offer further financial support to long-time supplier Takata, whose airbag inflators are at the center of a deepening global recall.