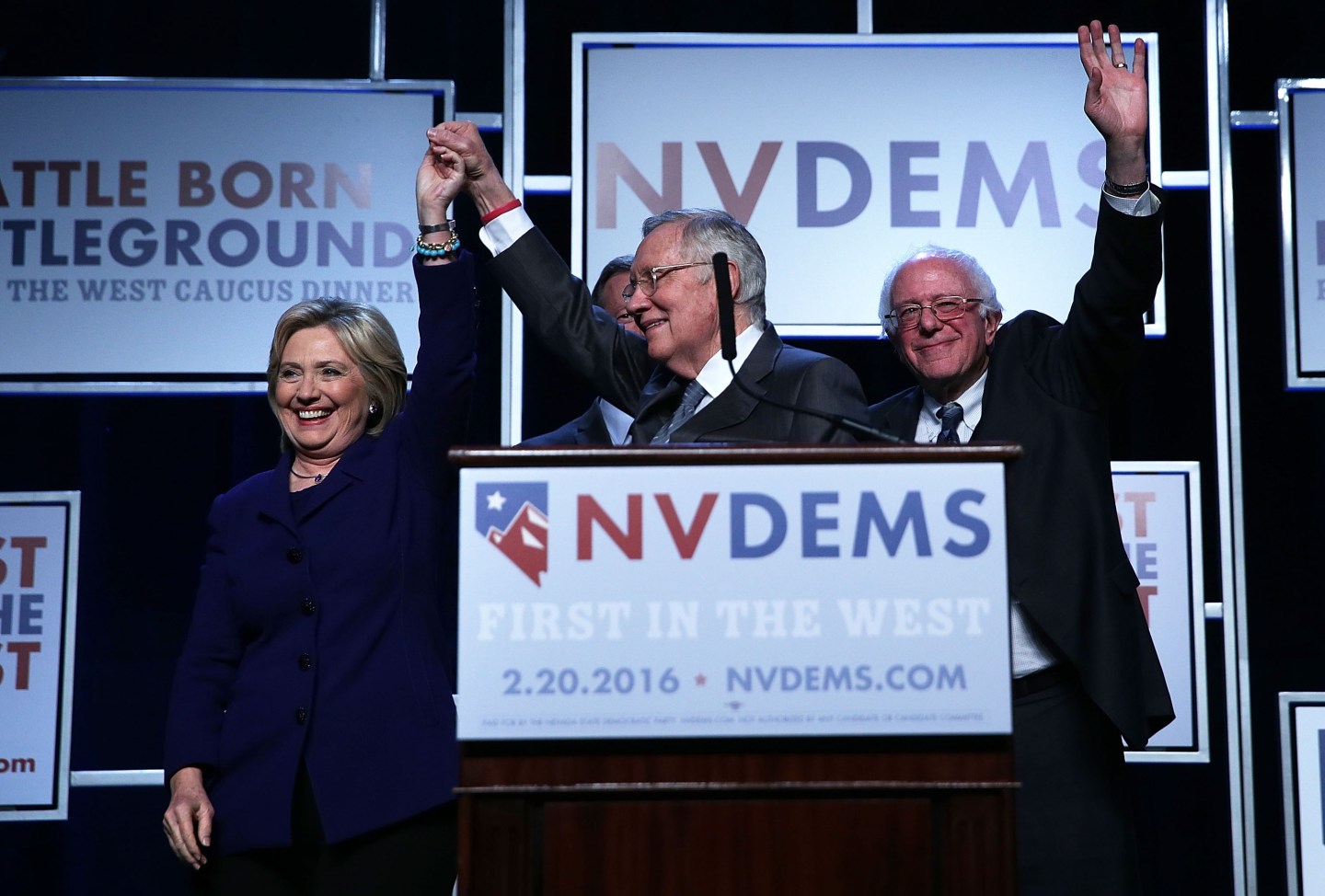 Democratic presidential candidates Bernie Sanders and Hillary Clinton were locked in a tight race in Nevada on Saturday, with early results showing Clinton with a slight edge over Sanders with 27% of precincts reporting.

Sanders was hoping a stronger-than-expected showing would prove his appeal to minority voters and puncture Clinton’s argument that he is a one-note candidate whose support is limited to mostly white states.

After routing Clinton in New Hampshire and finishing a strong second in Iowa, states with nearly all-white populations, Nevada’s Democratic caucuses give Sanders his first chance to prove he can win over black and Hispanic voters and compete nationally as the race moves to states with more diverse populations.

Nevada Democrats gathered at about 250 locations around the state. The doors at caucus sites were scheduled to close at 12 p.m. (1500 EST), although some stayed open longer to accommodate long lines.

The long day of voting begins in South Carolina, where polls opened for Republicans at 7 a.m. (1200 GMT) and will close at 7 p.m. (2400 GMT). Results of Nevada’s Democratic caucuses are expected to begin rolling in within the next few hours.

Public opinion polling has been scarce in Nevada, where Latinos and African-Americans made up nearly one-third of the Democratic electorate in 2008 and are expected to account for more this time. A few recent surveys show a tight race, however.

Clinton’s campaign has argued she would assert control of the Democratic race once it moved to more diverse states with black and Hispanic populations who have traditionally backed Clinton and have been slow to warm to Sanders.

But a Sanders win in Nevada would shatter that perception, fueling new questions about Clinton’s strength in a campaign that was once considered a cakewalk for her. It would also raise the stakes for the next contest, in South Carolina on Feb. 27.

A Clinton win, however, would halt the momentum Sanders has generated from his 22-point defeat of Clinton in New Hampshire and position her to begin rolling up wins and delegates in South Carolina and on “Super Tuesday” on March 1.

Both Sanders and Clinton visited workers at Harrah’s Casino on Saturday morning, just barely missing each other as Clinton arrived and Sanders walked out. After Clinton took photos with those present—many of whom were wearing red Clinton campaign shirts—she reminded them to caucus. “I need your help this morning, in the show room, 11 a.m.,” Clinton said.

For Clinton, that cultural competence sometimes could be found in small details—like the fact that “house party” does not translate well in Spanish. The Clinton campaign used the word “cafecito” instead to describe a potluck type event where people gather and talk politics.

The Clinton campaign also built a strong text message list, reflecting the fact many Latinos primarily or only access the Internet by their phones.

The Sanders campaign also targeted Latinos. At a phone bank event on Wednesday, volunteers chatted in Spanish and English to persuade them to turn out for Sanders. Mexican-American actor and television personality Marco Antonio Regil made calls for Sanders.

“Bernie, he gets me,” he said, in-between phone conversations. “We have gone so much to the right that we need someone who brings us a little bit to the left.”

Sanders’ campaign manager, Jeff Weaver, told reporters on Friday night that the campaign had also reached out to black voters in Nevada, who accounted for about 15% of the caucus electorate in 2008.

Sanders, a U.S. senator from Vermont, is a self-described democratic socialist who has criticized Clinton’s ties to Wall Street and generated enthusiasm among young voters with his call for breaking up the big banks and reducing income inequality.

Clinton has said Sanders’s emphasis on an anti-Wall Street agenda made him a one-issue candidate, and has questioned whether his proposals are politically viable in a gridlocked Washington.

On the Repubican side, front-runner Trump created some last-minute drama in South Carolina after Pope Francis said on Thursday his views on U.S. immigration were “not Christian.” Trump initially called Francis “disgraceful,” but later called him “a wonderful guy.”

The Vatican later clarified the pope’s remarks, saying they were “in no way” a personal attack and were not an indication how to vote.

Trump also called for a boycott of Apple Inc products until the tech company agreed to help the U.S. government unlock the cellphone of one of the killers in last year’s San Bernadino, California, shooting.