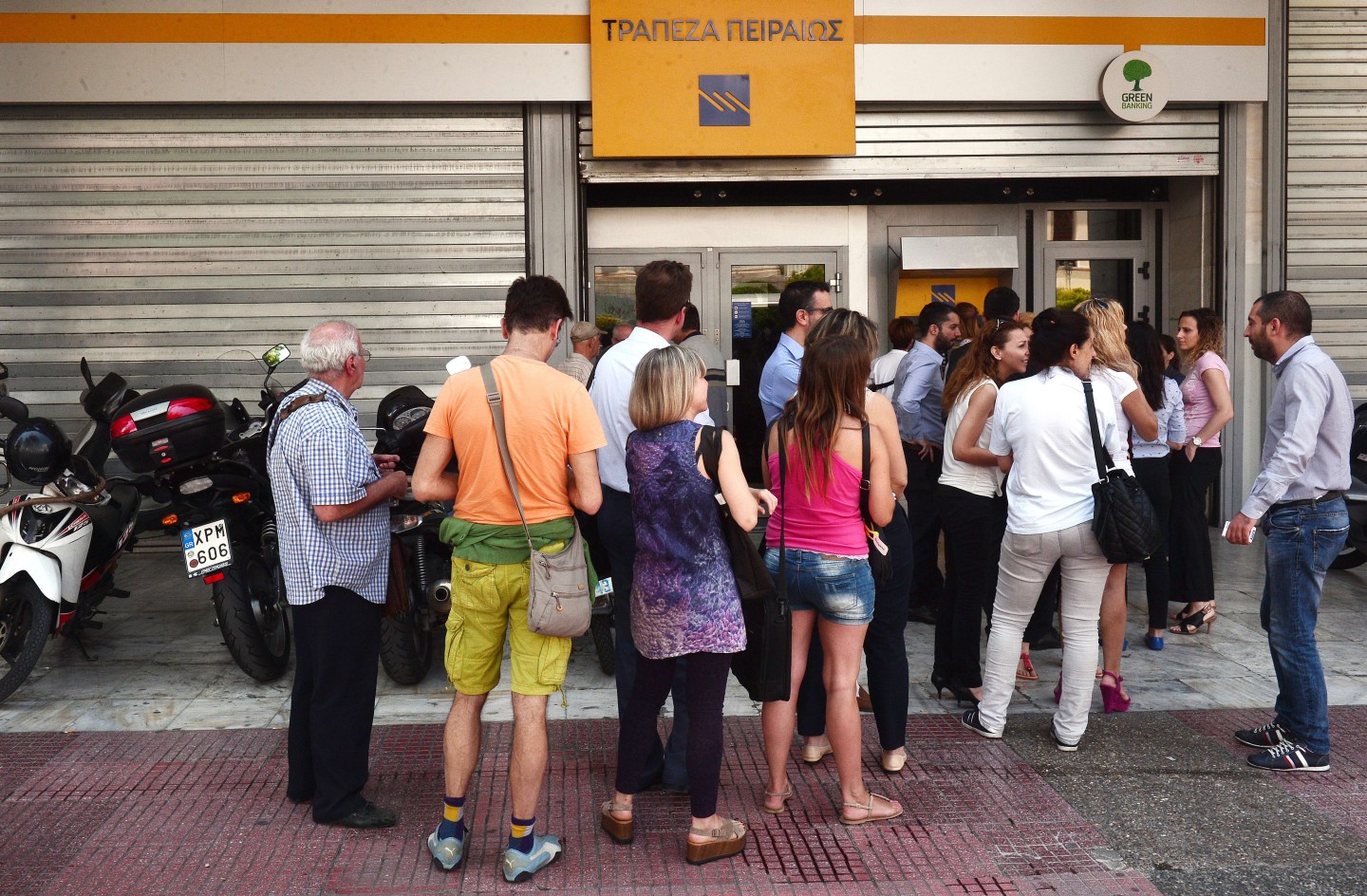 People queue at the ATM machines of the Piraeus bank in central Athens, after the opening of the transactions on June 29, 2015. Greece ordered its banks to shut for one week and imposed capital controls today, sending markets tumbling after its citizens emptied ATMs on the eve of a potentially disastrous default. In a ray of hope, creditors left the door open to Greece for a last-ditch debt deal, in order to try and avert a dangerous default that could spark a Greek eurozone exit and raise serious questions about the future of the European Union. AFP PHOTO / LOUISA GOULIAMAKI (Photo credit should read LOUISA GOULIAMAKI/AFP/Getty Images)
Photograph by Louisa Gouliamaki — AFP/Getty Images

Greece’s EU lenders have been working on a plan to offer the country gradual debt relief on condition that it adopts additional reforms by 2022, the Agora weekly newspaper reported on Saturday.

They would initially allow lower interest rates and longer maturities on Greece’s 316-billion-euro ($352 billion) debt, the paper said. At a later stage, there would be talks on linking debt payments to economic growth provided Athens implemented measures to be agreed with creditors by 2022, it added.

The plan has been discussed among officials from the European Commission, the euro zone’s rescue fund, the European Central Bank, and the larger euro zone nations, the paper said.

The lenders have publicly spoken about granting debt relief on condition reforms are completed.

Asked about the report, Finnish Finance Minister Alexander Stubb said: “At this moment, we are not looking at debt relief but at completing the third programme’s first interim review.”

On Thursday, Jeroen Dijsselbloem, chairman of the euro zone finance ministers group, had said they were concerned with the quality of the reforms Greece had promised in return for its bailout.

Negotiations between the heads of the EU/IMF mission reviewing the country’s progress on a pensions overhaul, fiscal targets and the handling of bad loans, took a break earlier this month.

It was unclear when the lenders will return in Athens. Without their positive first assessment of the reforms, Greece cannot start relief talks it is seeking to show austerity-weary Greeks their sacrifices are paying off.

Speaking after an EU summit that on Friday agreed a deal to help keep Britain in the bloc and tackle the region’s migration crisis, Greece’s Prime Minister Alexis Tsipras said all EU partners agreed the review needed to conclude as soon as possible.

Greece’s finance minister suggested on Saturday that differences between EU partners and the IMF over the bailout programme was undermining government efforts to help the Greek economy recover after years of recession.

The IMF has said that it stands ready to support Greece only if the country’s EU partners granted it “significant” debt relief. But Europe has made clear that it wants conclusion of the review before launching debt relief talks.

The Fund’s director for Europe, Poul Thomsen, said last week that Greece will also need to implement extra measures worth about 9 billion euros to meet its fiscal targets by 2018.

“The whole pressure is on us. So, I can’t see how the IMF thinks its role as that of an “honest broker,” Euclid Tsakalotos said in an interview with weekly Realnews paper.

“Footdragging in the negotiations is hindering the government strategy to get out of the vicious circle of measures-recession-new measures.”

In an interview with another Greek newspaper, Economy Minister George Stathakis said the review could be wrapped up by the end of March.

“The target for the Catholic Easter (March 27) is absolutely realistic,” he was quoted as saying in the weekly Ependysi. “I believe that there will be a deal.”