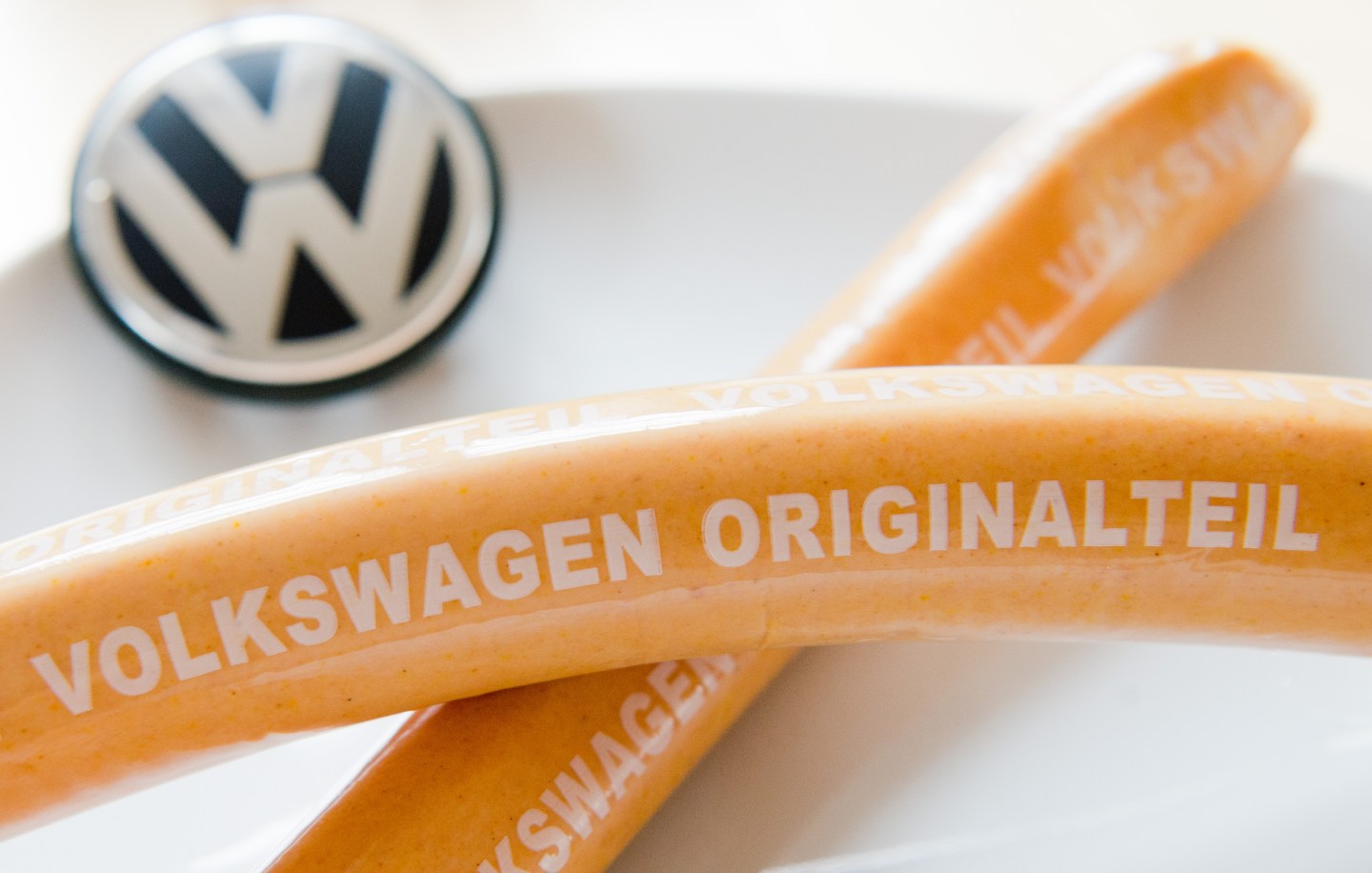 ILLUSTRATION - Curry sausages with 'Volkswagen Originalteil' (lit. 'original part') written on them lying on a kitchen table in Hanover, Germany, 19 February 2016. The curry sausage production at Volkswagen again excelled the car production in 2015. 7.2 million curry sausages were produced at Volkswagen's butcher shop in Wolfsburg in the past year. Photo by: Julian Stratenschulte/picture-alliance/dpa/AP Images
Photograph by Julian Stratenschulte — picture-alliance/dpa/AP

While Volkswagen’s emissions scandal has recently dampened sales of its vehicles, one of the German automaker’s more unusual products is selling like, well, hotcakes.

For about 43 years, Volkswagen’s flagship factory in Wolfsburg, Germany in addition to making cars has been producing currywurst, a pork sausage that is a popular delicacy among the company’s employees, customers, and fans at local soccer matches, according to a promotional video.

In 2015, while Volkswagen’s car deliveries fell nearly 5% from the previous year to 5.8 million, its currywurst output soared 14%, to 7.2 million sausages, according to German newswire DPA. It’s not the first time the automaker has cranked out more currywursts than cars. Production of its curried wieners—which are branded with a stamp that says “Volkswagen original parts” in German (“Volkswagen Originalteil”) and are sold in at least 11 countries—has exceeded production of Volkswagen cars (not including the company’s other lines such as Porsche and Audi) for at least the past three years.

But people on Twitter seized on the sales comparison to make jokes about Volkswagen’s struggles since the company admitted in September that it had cheated on diesel emissions tests to meet pollution limits.

Volkswagen sold more sausages than cars in 2015. They just had the wurst year https://t.co/XX6cke0buF @TheLocalGermany

Volkswagen now makes more Sausages than automobiles. Can things can get any wurst for the company? pic.twitter.com/GIIFbLxaFy

This is the wurst news VW sold more sausages than cars , kraft durch froide as they used to say. https://t.co/x21CXQ5Q5S

Volkswagen’s currywursts come in two lengths (up to 10 inches) as well as a vegetarian version, and are served with spicy curry ketchup. Car dealers often gift a five-pack of sausages to customers who purchase a new Volkswagen vehicle, according to the company—which might explain why currywursts, which Volkswagen calls its “most popular product without wheels,” are outselling the cars themselves.

Although consumers have come to doubt Volkswagen’s environmental certifications about its vehicles, those fears have apparently not diminished their appetite for the sausages, which also come with their own chemical-free claims. Volkswagen says its currywursts do not contain protein powder, MSG, phosphates or certain other harmful preservatives, and are “certified by the EU,” referring to European Union regulators. It was unclear whether anyone had retested the sausages following the company’s emissions revelations.