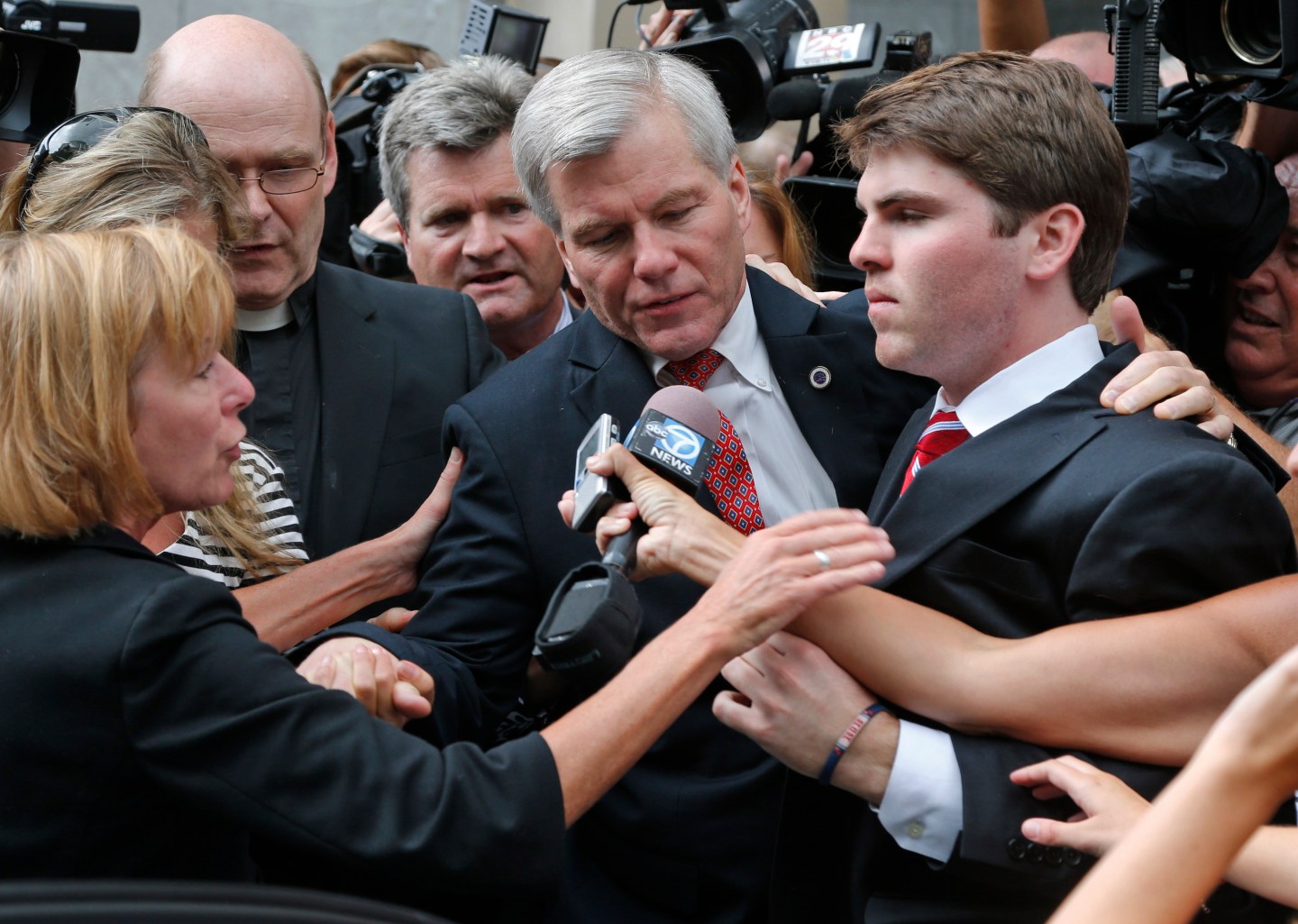 Former Virginia Gov. Bob McDonnell, center, is mobbed by media as he gets into a car with his son, Bobby, right, after he and his wife, former first lady Maureen McDonnell, were convicted on multiple counts of corruption at Federal Court in Richmond, Va., Thursday, Sept. 4, 2014. A federal jury in Richmond convicted Bob McDonnell of 11 of the 13 counts he faced; Maureen McDonnell was convicted of nine of the 13 counts she had faced. Sentencing was scheduled for Jan. 6. (AP Photo/Steve Helber)
Photograph by Steve Helber — AP

While most of the legal furor surrounding Supreme Court Justice Antonin Scalia’s death has been focused on the likelihood that his absence could reshape blockbuster conflicts such as abortion, affirmative action, immigration, and labor rights, there is one lesser-known case that is also likely to be greatly affected.

That’s because, at a time when questions about undue influence on the political system—by Wall Street and others—are being hotly debated in the presidential primaries, the Supreme Court is considering a case that could redefine the point at which a public official steps over the legal line when it comes to favor-swapping with financial backers.

Why the case at hand was even accepted by the nine justices is still a bit of a mystery. A jury and a federal appeals court agreed that Virginia governor Robert F. McDonnell, known as Bob, had misused his office and convicted him of 11 corruption-related counts. After protracted appeals, the Republican politician was set to go to prison for two years.

But then last August the justices threw him a lifeline.

First, McDonnell, who was famously photographed driving a benefactor’s Ferrari while enjoying a free getaway to the benefactor’s lakeside house, got a stay freezing legal action in his case. Then last month the justices agreed to hear arguments that the actions he undertook for the Ferrari’s owner were simply “routine political courtesies”—everyday favors to financial supporters—and not official acts illegally carried out in return for bribes.

The unexpected decision to review his appeal, which presented no lower court conflicts, raised the strong possibility that some of the justices were interested in using the case as a way to examine how public corruption is defined, and possibly to tie prosecutors’ hands when they try to pursue erring politicians.

The last time the Supreme Court delved deeply into public corruption, it was a blow to prosecutors. In a 2010 ruling, the justices gutted a widely used anti-fraud law that made it criminal to deny “honest services,” and put into question the fraud conviction of a notorious defendant, former Enron CEO Jeffrey K. Skilling.

The court, which did not overrule Skilling’s conviction, limited the law to cover only bribery and kickbacks. But Scalia said their decision did not go far enough. He wanted to entirely eliminate the law, which was a key tool for prosecutors to pursue wrongdoing both by politicians and in the private sector.

In wading into public corruption law again, the court has not given an explanation or said which justices accepted the case. But Scalia’s views against criminalizing political actions make it likely he was among those in the ‘yes’ column.

A broad redefinition of public corruption could open the door to the reexamination of other corruption cases. The Justice Department is currently pursuing a public corruption case against Robert Menendez, the Democratic senator from New Jersey who could be going to trial later this year. His case could be helped if McDonnell were to win a ruling raising the bar to criminal prosecution for political favors.

Another politician whose fortunes could be affected by resetting the parameters of political corruption is former Illinois Governor Rod Blagojevich, who grabbed headlines on charges he tried to sell Barack Obama’s Senate seat following his 2008 election as president.

Blagojevich, who was convicted of 18 corruption-related counts at trials in 2010 and 2011 and has been in prison since 2012, has appealed his conviction. The outcome of his appeal could depend on what the Supreme Court decides to do in the McDonnell case. If the justices decide they would rather delay until another justice is sworn in to take Scalia’s seat, the process could be lengthy.

Other prominent politicians who could be affected by a Supreme Court ruling are former New York Assembly speaker Sheldon Silver and Dean Skelos, a former New York state Senate majority leader. Both were convicted of public corruption.

McDonnell has the most on the line right now. Without Scalia’s vote, the court could well wind up being tied 4-4 on his appeal, which would mean that the lower-court opinion would stand and the former governor would be required to report to prison. Were this to happen, he would not only have a criminal record, but he would also probably lose his license to practice law, the likely source of most of his future income.

His lawyers have mustered a lengthy list of political heavyweights to lobby the high court in his favor. About a dozen groups filed briefs supporting his bid for review, including more than four dozen former state attorneys general, 31 governors and several former high-ranking federal officials, including a retired judge.

“Dangling the threat of criminal liability over every lunch with a lobbyist and every meeting with an interest group would impede the proper functioning of state and local governments,” some of attorneys general argued.

McDonnell, they maintained, was doing nothing out of the ordinary in his interactions with Richmond businessman and dietary supplement marketer Jonnie R. Williams, who gave the governor and his wife Maureen $177,000 worth of gifts and loans, including free luxury vacations, designer dresses and shoes, golf clubs, two iPhones, a silver Rolex inscribed “71st Governor of Virginia,” and $120,000 in low-interest loans.

In exchange, the jury agreed that McDonnell had helped arrange meetings for Williams with state officials; let him use the governor’s mansion for a luncheon the same day his product, a dietary supplement called Anatabloc, was being launched; and personally recommended the supplement to state health officials.

Williams wanted the supplement to be included in state research and in the state’s health plan, which would have given him a steady stream of income. Those actions were not taken, but prosecutors said that did not diminish the fact that McDonnell’s actions amounted to selling his office.

Both McDonnell and his wife Maureen (who was convicted in 2014 and faces a year and a day in prison) have been able to stay out of jail while their appeal is in process.

It will soon become clear if a post-Scalia court is interested in revisiting what constitutes public corruption in their case and others. Any looser boundaries on such actions could benefit all American politicians by making it more likely they could avoid being held accountable for favorable treatment of their financial backers and friends.