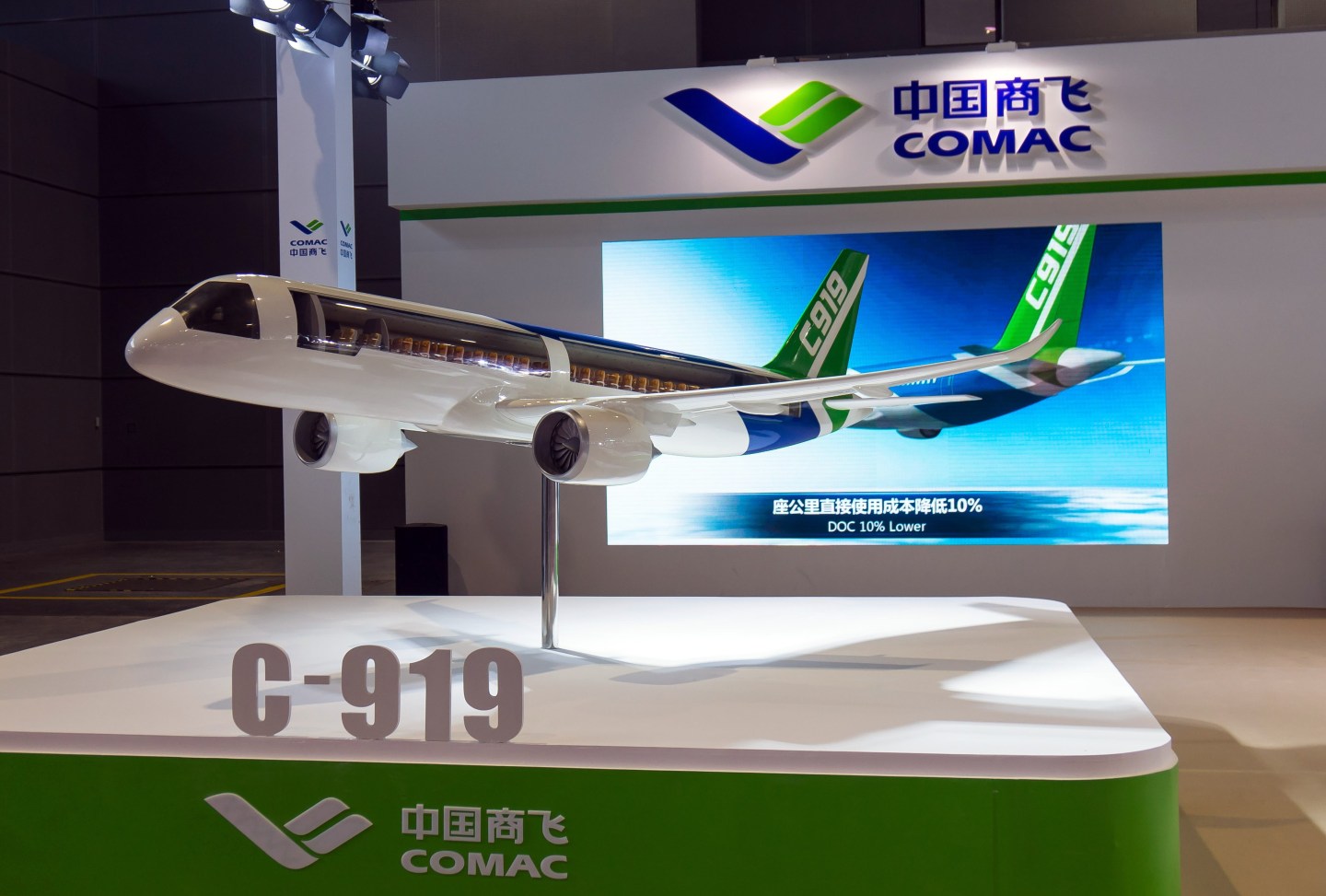 This picture taken on November 3, 2015 shows a model of the Chinese-made Comac C919 passenger aircraft at the 17th China International Industry Fair (CIIF) in Shanghai. The fair will be held from November 3 to 7 with 2,270 exhibitors from 28 countries and regions participating. CHINA OUT AFP PHOTO (Photo credit should read STR/AFP/Getty Images)
STR AFP/Getty Images

There was a time not too long ago when a Chinese airplane manufacturer could capture the attention of this week’s Singapore Air Show like a homecoming queen strolling past the football team.

The aviation world’s hopes, fears, and ultimate curiosity six years ago rested with the question of whether China’s state-owned manufacturer, called the Commercial Aircraft Corporation of China but known to insiders simply as Comac, would meet a brisk timeline for building a plane that could match the efficiency of similar Boeing (BA) and Airbus (EADSY) models. In 2010, Comac said the 158-seat narrow-body twin-engine plane it had announced only two years earlier would be ready for its first flight in 2014 and deliveries to airlines in 2016.

Comac is again attending the Singapore show this week where executives from Boeing, Airbus and other global players are talking about the colossal growth of air travel in China, economic slowdown be damned. Boeing says China’s carriers will spend nearly $1 trillion on more than 6,300 new planes over the next two decades. That’s 700 more than Boeing estimated just three years ago and a large reason why China’s government created Comac.

But Comac today is missing much of its earlier swagger and curiosity from competitors has given way to the realities of delays. Some of the plane’s suppliers say its first flight is now scheduled at least two years late, for the end of 2016. Comac has also delayed the delivery date to airlines to 2018 but Aviation Week reports the timeframe is closer to 2019 or 2020.

Boeing’s 787 Dreamliner and Airbus’s A380 superjumbo infamously suffered from delays too. The first airline received their Boeing order three years later than expected. Delays and cost overruns are a part of modern aviation.

But the bigger worry for Comac is that its plane, the C919, will be dead on arrival.

The C919’s total weight wasn’t planned to be lighter than comparable Boeings or Airbuses, and Aviation Week says the first assembled plane is heavier than forecast. The efficiency of the engines, produced by a GE (GE) joint venture with France’s Safran (SAFRY) called CFM, was not forecast to be better than the competition either, as Fortune wrote when it profiled Comac two years ago.

That means after the delayed delivery, maybe in 2020, the C919 will face even stiffer competition from Boeing and Airbus when they roll out new variants of their world’s best-selling planes in the 737 and a320.

Comac’s only customers for now are Chinese airlines, most state-owned, who don’t have much choice in the matter. But a delayed C919 with worse-than-expected fuel efficiency would create a dilemma for China carriers who want to appease the government with purchases but also fly competitive aircraft to earn the highest profit to, again, appease the government.

So Comac is staying away from the cameras and crowds in Singapore, and competitors are talking less about it, until it has more exciting things to discuss than further delays.