How the E.U. Could Suffer from Denmark’s Refugee Policy 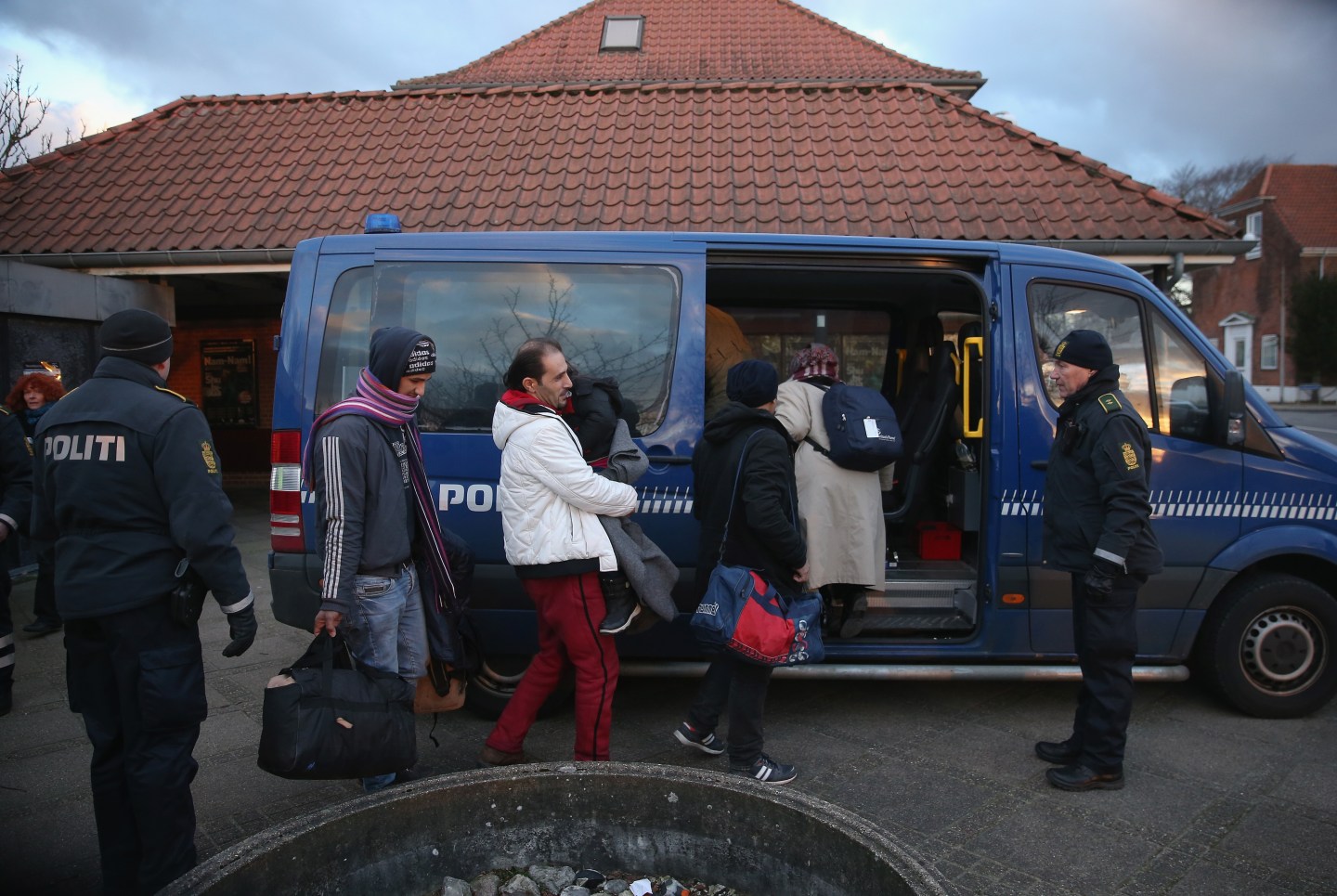 PADBORG, DENMARK - JANUARY 06: Danish police escort a family from Syria seeking asylum in Denmark after finding them while checking the identity papers of passengers on a train arriving from Germany on January 6, 2016 in Padborg, Denmark. Denmark introduced a 10-day period of passport controls and spot checks on Monday on its border to Germany in an effort to stem the arrival of refugees and migrants seeking to pass through Denmark on their way to Sweden. Denmark reacted to border controls introduced by Sweden the same day and is seeking to avoid a backlog of migrants accumulating in Denmark. Refugees still have the right to apply for asylum in Denmark and those caught without a valid passport or visa who do not apply for asylum are sent back to Germany. (Photo by Sean Gallup/Getty Images)
Photograph by Sean Gallup via Getty Images

The Danish Parliament last month moved to seize assets and valuables of persons applying for refugee status in Denmark. Ostensibly to help pay for the cost of processing the asylum applications and assisting would-be refugees while they await a decision, this legislation is eerily reminiscent of Nazi Germany’s confiscation of the assets of the Jews under the Nuremburg Laws. The true purpose of the new legislation appears to be deterrence — providing a sufficiently hostile environment to convince asylum seekers to look for safety elsewhere. It follows on other measures adopted by Denmark to deter the entry of Muslim refugees and immigrants, including one community’s decision to require that all public schools serve pork products for student lunches. Denmark is effectively passing the buck to other countries with more open policies. Similarly, the Swedes have already stated that they expect to reject the applications of 80,000 asylum seekers, or half of the 160,000 who applied in 2015. In Finland, an anti-immigrant vigilante group known as the Soldiers of Odin, patrol Tampere to ‘protect’ its citizens from asylum seekers. These efforts serve to reverse the image of the countries as welcoming societies. Should all countries pursue similar policies, the result could be disastrous for refugees.

This in stark contrast to Denmark’s policies 70 years ago. In 1943, as the occupying German forces threatened to deport Denmark’s Jews to concentration camps, the Danish people, led by King Christian X, began a sealift to bring their at-risk compatriots to neutral Sweden. Risking their own lives to save the Jews and others threatened by Nazi persecution, the Danes were beacons of light in an otherwise darkened Europe. Sweden did its part as well, opening its ports and accepting the Danish Jews as refugees to be assisted and protected until German forces were expelled from Danish territory.

See also: Why This Danish City Is Making Pork Mandatory on School Menus

Denmark’s failure today to share responsibility for refugees is not only harmful to people seeking asylum within Europe, it also threatens the viability of the European Union itself. The effort to build a unified Europe began after the devastations of World War II. Rather than risk further warfare, Germany, France and the Benelux countries (Belgium, the Netherlands and Luxemburg) strove to link their economies and make former enemies into partners for shared prosperity. Other countries join this incipient union, which today numbers 27 countries with still others seeking to join. A cornerstone of the European Union is free movement among member states. An agreement negotiated in Schengen has opened borders within the E.U. while harmonizing border controls with non-E.U. countries. However, the influx of asylum seekers and the reluctance of some E.U. member states to share the burden have led to the re-erection of border controls within the union.

Concerns about the financial, social and even cultural impacts of large numbers of asylum-seekers should not be discounted. However, deterrence of the sort practiced by Denmark is not the answer to this problem. The answer is two-fold. First, implement effective and timely mechanisms to distinguish persons who face life-threatening situations if returned home from those who may be seeking economic opportunities alone. Provide a secure status to those who are endangered and commit to the humane but efficient return of those who are not. Such programs benefit refugees while enabling the repatriation of those with no need for protection. Timely adjudication also reduces the costs of caring for asylum seekers until their applications are decided.

Second, provide avenues for those granted refugee status to become economically self-sufficient as soon as is possible. Self-sufficiency is the explicit goal of the U.S. refugee program. The vast majority of refugees want nothing more than the ability to work, earn a living and contribute to the country that has provided refuge. With their low fertility rates, European countries are facing labor shortages. Helping refugees enter the labor market as soon as possible will help the European economy. It will also avert some of the radicalization that is associated with high levels of unemployment among minority populations. Employed persons tend to have a higher stake in the future. And, for those who return to their home countries when it is safe to do so, the skills developed in Europe will be essential for the reconstruction of these war-torn countries.