GOP Debate Moderators Refuse To Ask About The Economy 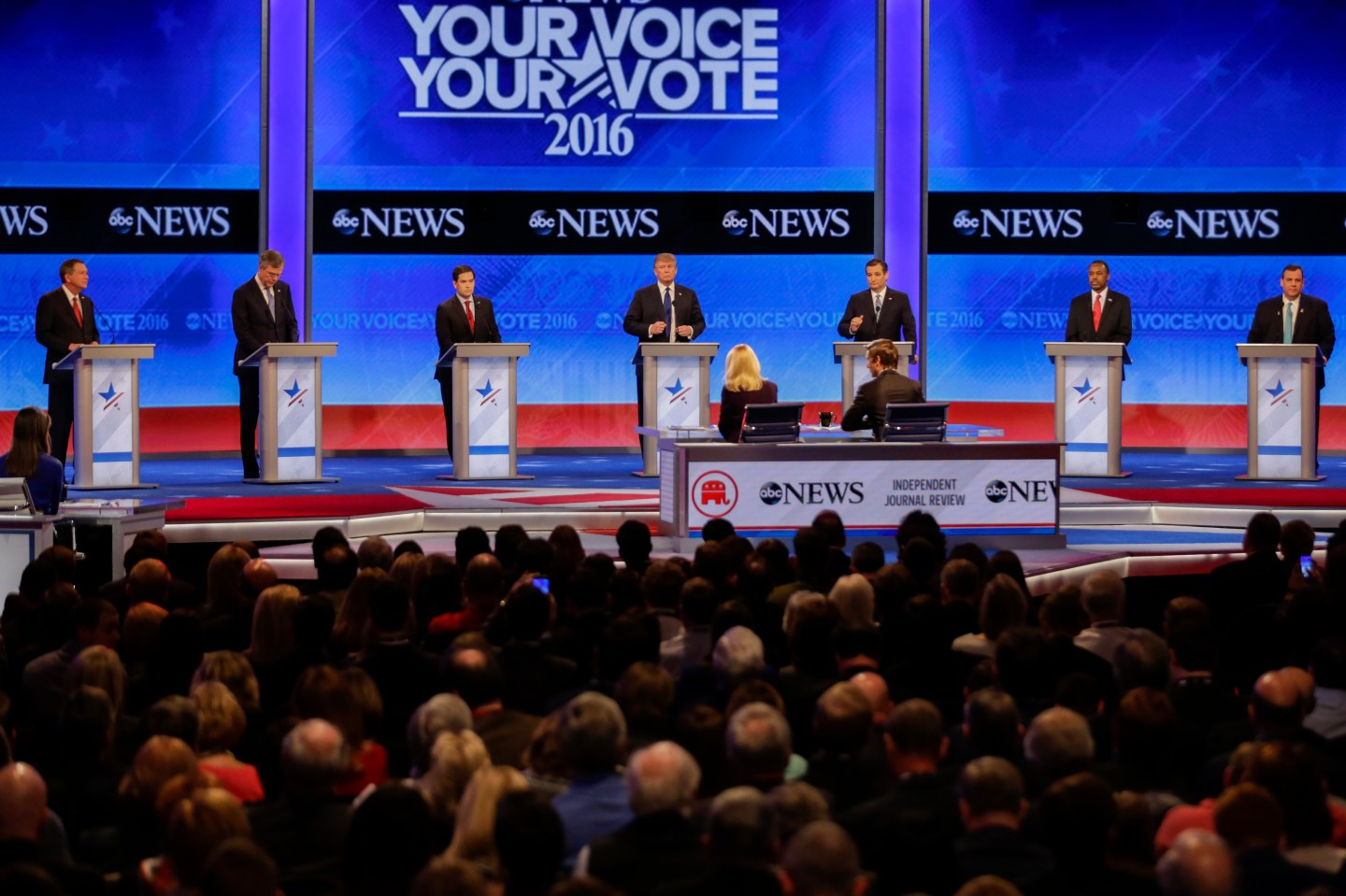 I watched the GOP presidential debate on Saturday night. Not because I’m an undecided voter in New Hampshire, but because I’ve been hoping for an economic discussion that would give me something to write about.

But it didn’t happen. Again.

I counted 59 questions asked by the ABC News moderators to a specific candidate, not counting the one that asked each candidate for their Super Bowl predictions. Of those, just four were about jobs, taxes or the U.S. economy. This despite the fact that moderator David Muir introduced the entire evening by saying: “We’re going to tackle the issues Americans are most concerned about, the economy, ISIS, Homeland Security.”

The four ‘economic’ questions were to:

That was it. There were more than three times that number about terrorism. And I’m not even counting the numerous follow-ups when candidates didn’t get specific enough for the moderators’ liking. Same for a category of “politics” questions that concerned campaign tactics and electability. Immigration also got greater play.

To be clear, this isn’t a knock on the candidates. It’s on the moderators, and it’s hardly a one-time thing.

For whatever reason, recent GOP debates have given the economy extremely short shrift, even though the party’s voters regularly tell pollsters that the economy is among their top areas of concern.

The previous debate, hosted by Fox News Channel on Jan. 28, was even worse. Of the 47 questions I counted, just two had anything to do with economic issues. And both of those were about federal ethanol subsidies (one to Ted Cruz, one to Ben Carson). Perhaps you also could add in a question to Marco Rubio about climate change, given that it was put in the context of Rubio’s position that “federal efforts to fight climate change will cost U.S. jobs and hurt the U.S. economy.”

And then there was the one before that, on Jan. 15, which should have had more of an economic focus given that it was hosted by Fox Business Network (sarcastic italics mine). It began promisingly enough, with a question to John Kasich on the stock market decline and one to Jeb Bush on recent employment figures but, in the end, just four of the 36 questions were about jobs, taxes, or the economy. The other two included one to Donald Trump about proposed tariffs on Chinese goods (which generated lots of cross-talk) and one to Ben Carson on corporate inversions.

So I was a bit surprised when one of the Fox Biz moderators, Maria Bartiromo, seemingly agreed with my criticism of ABC News:

It’s also worth noting that of the 42 questions asked during the most recent Democratic presidential debate, hosted by MSNBC, only five were about the economy, taxes or jobs (not including one about Hillary Clinton’s paid speeches to Wall Street firms).