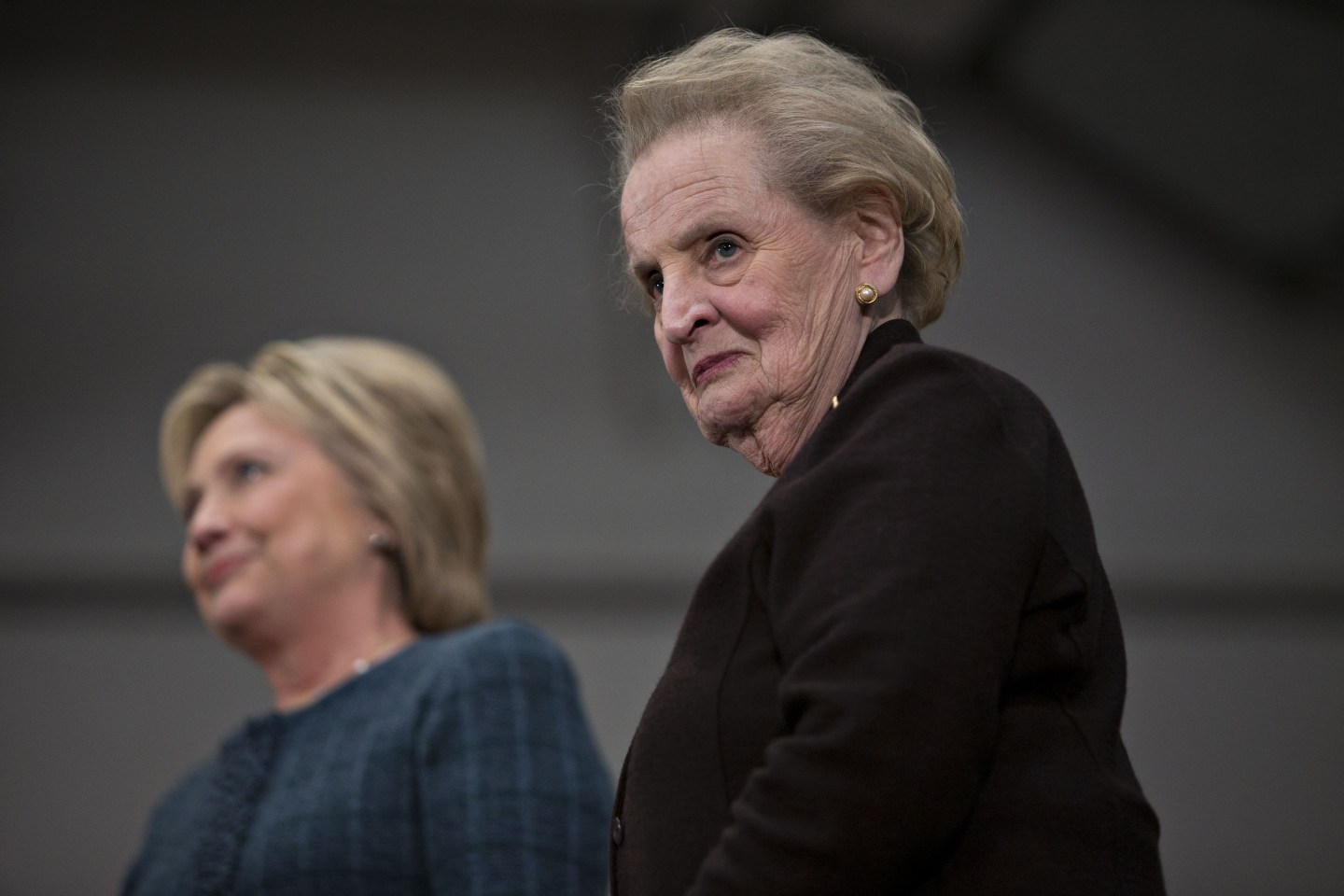 Madeleine Albright, former U.S. Secretary of State, right, looks at audience as she stands on stage with Hillary Clinton, former Secretary of State and 2016 Democratic presidential candidate, during a Clinton campaign event in Concord, New Hampshire, U.S., on Saturday, Feb. 6, 2016. Trailing Bernie Sanders in the Democratic contest by 20 percentage points or more in some polls of voters in the state, Clinton recalled that New Hampshire gave her a come-from-behind victory in the 2008 primary race and a dramatic boost to her husband, Bill Clinton, in his first run for the presidency in 1992. Photographer: Daniel Acker/Bloomberg via Getty Images
Photograph by Daniel Acker — Bloomberg via Getty Images

This story has been updated to reflect an apology from Gloria Steinem.

Two of the world’s most iconic feminist figures have some harsh words for young women who don’t back Hillary Clinton.

Madeleine Albright, the first female U.S. Secretary of State, appeared at a New Hampshire rally to introduce Clinton on Saturday and discuss the importance of electing the first female president. “We can tell our story of how we climbed the ladder,” Albright said in her introduction. “And a lot of you younger women think it’s done. It’s not done.” She also revived her famous catchphrase on the campaign trail: “There’s a special place in hell for women who don’t help each other.”

Albright, who teaches international relations at Georgetown University, also slammed Bernie Sanders for lack of knowledge about foreign policy issues. She told NBC that when he’s asked about them, he gives “very kind of simple answers” in contrast to Clinton, who she says “not only talked about what was going on in each of those countries, but also [spoke about] the other concerns about it, and the relationship to each other, and what the United States has to look out for.” According to a recent poll, just days ahead of the New Hampshire primary, Sanders is leading Clinton by 20 points.

Gloria Steinem also weighed in on the presidential race on Saturday evening during an appearance on Real Time with Bill Maher. When Maher asked her why she thinks more young women tend to support Sanders than Clinton, she answered, “The boys are with Bernie,” to which the host responded, “If I said that…you’d swat me.”

In response to the backlash she received about her comment, Steinem posted a message on Facebook saying, “In a case of talk-show Interruptus, I misspoke on the Bill Maher show recently, and apologize for what’s been misinterpreted as implying young women aren’t serious in their politics.”