Nostalgic For Old Viruses? The Malware Museum Has You Covered 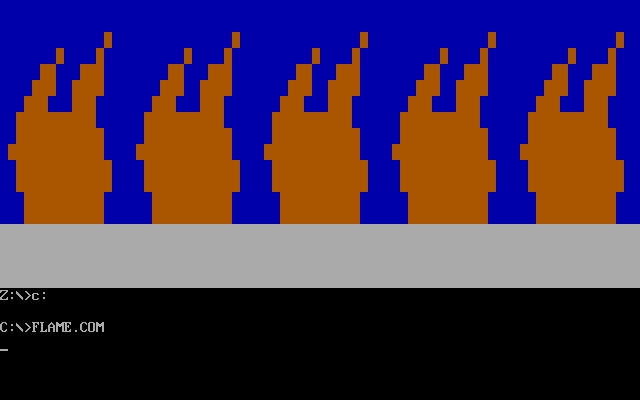 Screenshot of the vintage Flame.com virus.
Photograph by Internet Archive

Computer viruses have been around for decades, yet they have perhaps escaped the kind of nostalgia afforded to, say, old games.

No longer — if you have a hankering to relive the feeling of seeing ’80s and ’90s malware, but without the panic they might have caused at the time, welcome to the Malware Museum.

The repository was knocked together by Mikko Hypponen, the chief research officer at Finnish security firm F-Secure, and Jason Scott, the software collections curator at the Internet Archive.

Hypponen told Fortune the move was based on the facts that he had a large collection of malware from his 25 years in the business, and the Internet Archive had recently introduced an emulator for old MS-DOS software.

Set live on Friday, the collection comprises emulations that show the messages and animations victims would often see when their computer had been infected. Of course, the destructive bits have been taken out — these memories are safe for work.

One notable gem is the Frodo virus, which was one of the first of its kind to operate by stealth. Spread via floppy disk (these were the pre-web days), it caused infected systems to hang every September 22, the birthdate of both Bilbo and Frodo from The Lord of the Rings. It displayed the words “Frodo Lives” while doing so.

For more on cybersecurity watch:

Hypponen’s personal favorite is Casino, which would force the victim to play a game — if they won, they would get their files back, but if they lost, the malware would wipe their hard drive.

“The main difference is that most of the malware we find today is trying to make money,” he said. “The majority is done by organized crime — they make money with banking Trojans and ransom Trojans.”

“The old things we look at today were written by teenage boys who were bored. None were trying to make money — that’s why they play music and have cartoon characters. They had no other motive than trying to make a point.”

Of course, if old games are more your thing, then the Internet Archive has you covered on that front too. The 20-year-old project also notably launched an archive of political TV ads last month, to make sure nobody forgets candidates’ promises.

This article was updated to include the interview with Hypponen.