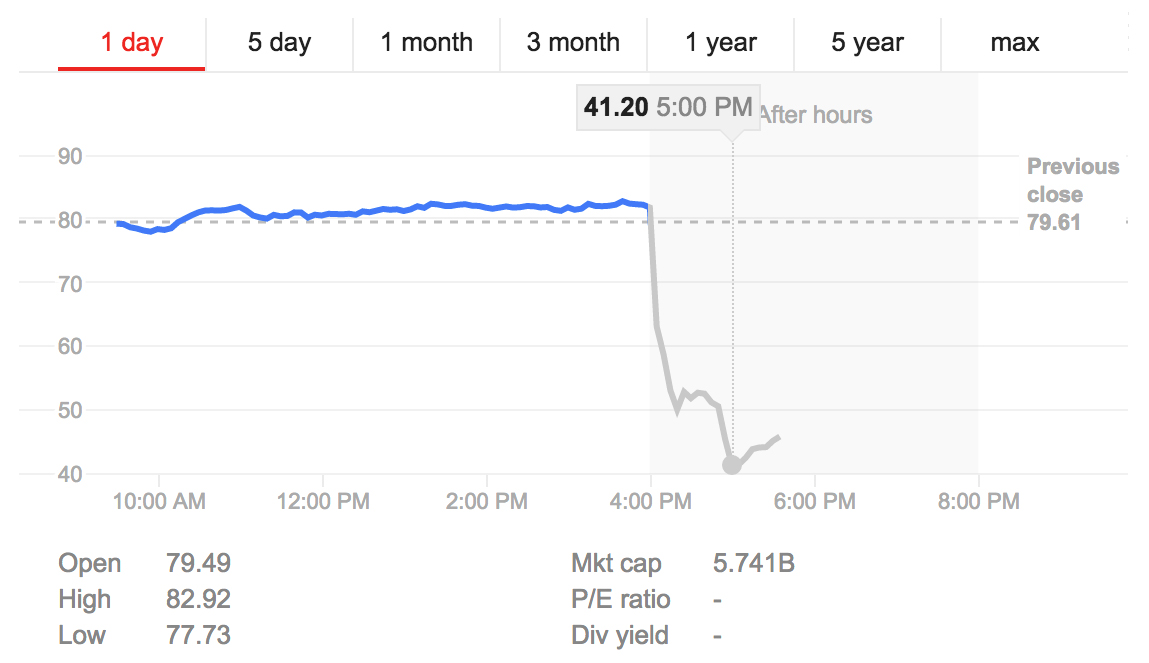 Tableau Software, the Seattle company known for its data analysis software, is taking a pounding in after-hours trading as investors traded its stock down by as much as 50% to $41.20.

The company’s shares were priced at $81.74 just minutes before the close of the market.

The company (DATA) released its fourth-quarter and full-year earnings results today, and if you were looking only at that, you’d understandably be surprised at the market’s reaction.

“This speaks to the immense popularity of Tableau’s products and continued strong demand from customers around the world,” said Tableau CEO Christian Chabot in a statement. “I remain optimistic that Tableau is best positioned to address the large and growing market opportunity for self-service visual analytics.”

So what’s the problem?

A warning in Tableau’s earnings release stating that the company was unlikely to realize the benefit of certain tax assets.

“The fourth quarter income tax expense was $34.1 million due to the recognition of a valuation allowance. We believe that it is more likely than not that the benefit from our U.S. federal and state deferred tax assets will not be realized. In recognition of this risk, we have provided a valuation allowance of $46.7 million on the deferred tax assets relating to these jurisdictions. Excluding the impact of the valuation allowance, the income tax benefit was $12.7 million for the fourth quarter primarily as a result of the permanent extension of the federal R&D tax credit.”

An hour after the market’s close, Tableau shares were hovering around $45.

Update, March 23, 2016: The reason for the stock drop, it turns out, is not that simple. Read our update to this story here.