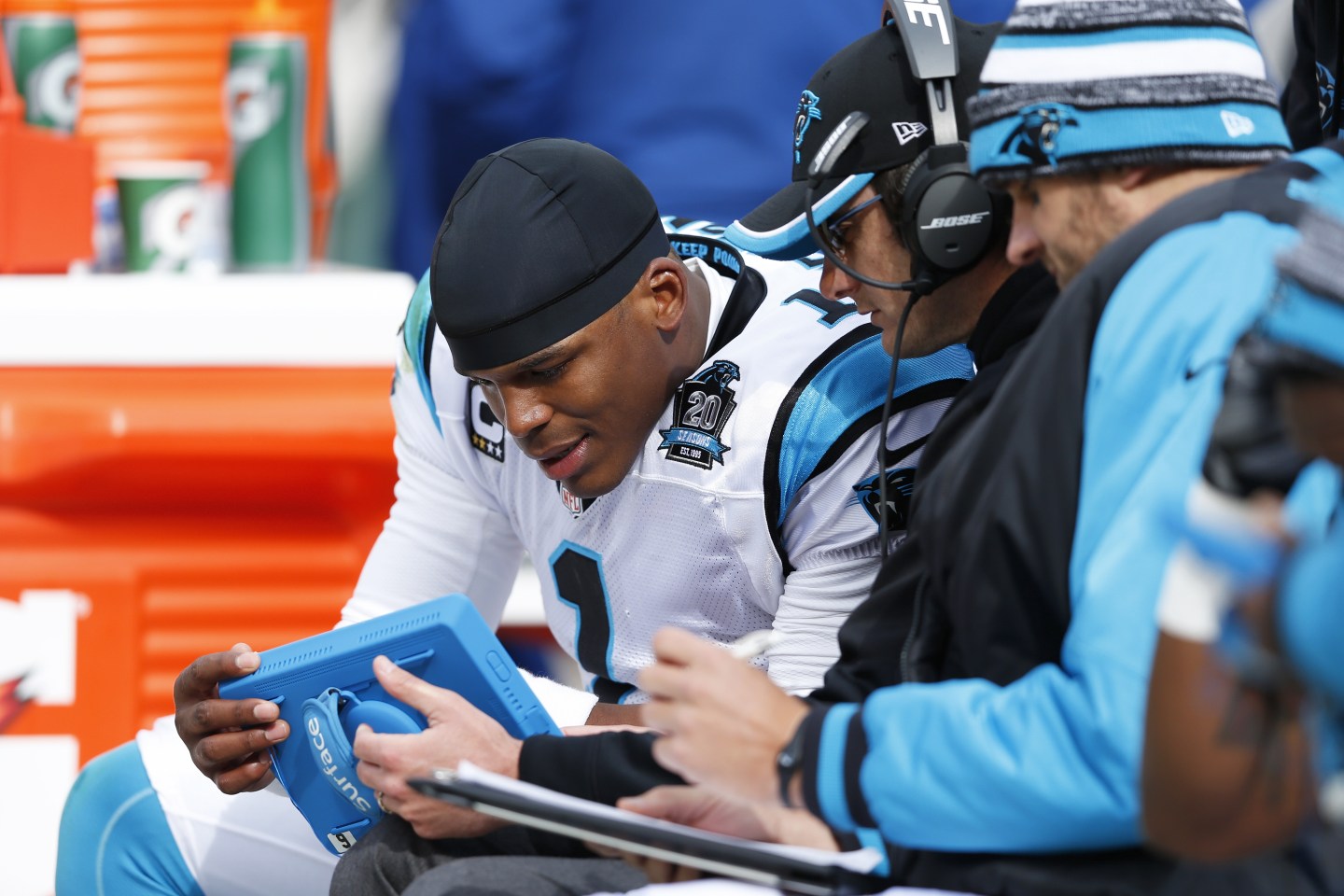 GREEN BAY, WI - OCTOBER 19: Cam Newton #1 of the Carolina Panthers looks at a play on a Microsoft Surface tablet on the sideline during the game against the Green Bay Packers at Lambeau Field on October 19, 2014 in Green Bay, Wisconsin. The Packers defeated the Panthers 38-17. (Photo by Joe Robbins/Getty Images)
Photograph by Joe Robbins — Getty Images

It may not be quite the beer holiday you expect, but it’s pretty hard to imagine the Super Bowl without a cold one somewhere within reach.

While Budweiser is pseudonymous with the Super Bowl thanks to its mighty marketing machine, the two teams playing this year come from craft beer hubs. Denver is the home of the Great American Beer Festival and many of craft’s biggest names, while Charlotte is a fast-growing beer city with a number of very strong brewers who are gaining a national reputation.

So while it’s easy to go with your favorite beer choice as you prepare for the big game, to really get into the spirit of the rivalry between the two teams, it might be more fun to crack open a hometown favorite of the two towns.

To determine exactly what those favorites were, we reached out to the folks at Untappd, the Facebook of the beer drinking world, to discover the top five beers for Denver and Charlotte. The app looked at which beers were most popular within a 15 mile radius of the two cities over the last 30 days as determined by unique users, rather than total check-ins. Here’s how it shook out:

1) NoDA Hop Drop ‘N Roll – A solid choice. This is a personal favorite of mine – and one of the best IPAs made in the Southeast, if not the country. (The judges at the World Beer Cup agree, having awarded it a gold medal in 2014.) It’s filled with a citrus-y, hopsy flavor that explodes on your tongue and a nice piney finish. It’s a truly outstanding beer.

2) The Olde Mecklenburg Copper Amber Ale – Amber beers can often carry a flavor that emphasizes caramel much too heavily. And just looking at Copper, you might expect it to fall in that category. Instead, it’s a crisp, refreshing ale that’s more biscuit than Werther’s candy. It’s malty with a very, very light hint of hops, with a smooth roasted quality that makes it eminently drinkable.

3) NoDA Jam Session – While I’m partial to Hop Drop ‘N Roll, if you’re looking for a less hoppy ale, this is a fine substitute. You’ll pick up grapefruit, a good bit of malt and a touch of caramel. It’s also a sessionable beer, which makes it a wise choice for Super Bowl drinking.

4) The Olde Mecklenburg Dunkel – While I haven’t had the chance to try this one personally, Untappd users praise the brown lager for its almost sweet, light taste and smooth drinkability.

5) Birdsong Higher Ground IPA – Here’s the bad news: Higher Ground is only available on draft in the Charlotte area, so unless you’re paying a visit, you’re going to have a hard time getting a taste. If you are in town, though, you’re in for a treat. Piney and citrusy and supported wonderfully by the malt, it’s a medium-bodied beer that doesn’t rely on extras to stand out.

1) Great Divide’s Titan IPA – Fairly widely available, this is an IPA that has a big citrus burst up front that mellows into a malty sweetness at the finish. It’s a smooth drinking beer that has just a mild bitterness.

2) Odell Brewing Co’s 90 Shilling – Haven’t had this one myself, but the number of Untappd check-ins on this make it pretty clear it’s a local favorite. Served at Mile High Stadium, home of the Broncos, fans call it a go-to beer. It’s a Scotch Ale that’s widely praised for its maltiness.

3) Denver Beer Co.’s Graham Cracker Porter -While I haven’t had the original, I did taste a couple of the offshoots (such as Coconut Graham Cracker Porter) at last year’s GABF and enjoyed them thoroughly. Untappd users say it’s smoky with a light sweet taste, though several note they were hoping for a stronger graham cracker taste.

4) New Belgium Brewing Co. Citradelic IPA – A new national offering from New Belgium, this explodes with the tangy citrus of tangerine at the first sip and ends on a very mild note. If anything, I’d prefer it to be a bit bolder and have a bigger body, but it will win a lot of people over.

5) Great Divide’s Hibernation Ale – An English-style Winter Warmer, Untappd users describe it as an “excellent night cap” that combines chocolate, toffee and coffee. It’s a sipping beer of sorts, so maybe save this one for the fourth quarter.

Something above sound good, but isn’t available in your area? You’ve still got a week before the game. If you know someone who lives there, this could be a great opportunity to attempt a beer trade with them.