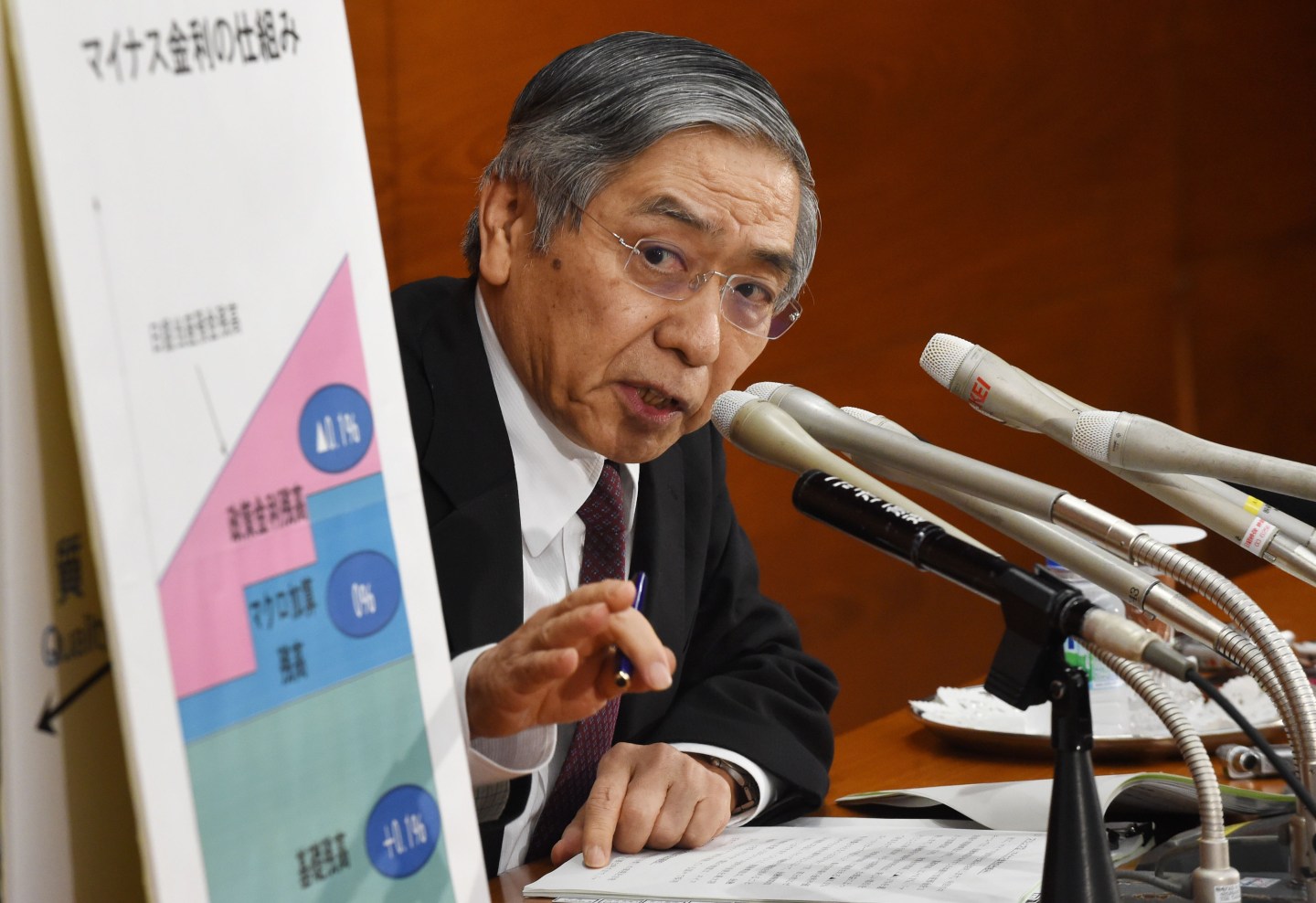 Japan has become the latest country to experiment with negative interest rates as it tries to stop the global economic slowdown from driving it back into deflation.

The Bank of Japan, which has seen the effects of its last stimulus dissipate due to tax increases and slowing demand from China, cut the rate it offers on new deposits to -0.1% from 0.1%, in an effort to ensure that the money it pumps into the system actually gets put to use in the real economy rather than being put back into reserves by risk-averse banks. In a statement, it said that “it will cut the interest rate further into negative territory if necessary.”

The BoJ’s action had a strong, if essentially knee-jerk, reaction on Japanese and Asian stocks, pushing the Nikkei 225 index up by 2.8% higher and benchmark indices in Shanghai and Hong Kong up by 2.2% and 2.3% respectively. European stocks also followed them higher, albeit by around 1%. Most importantly for the BoJ, it drove the yen back down to its lowest in over a month against the dollar. By 0430 ET, it was at JPY120.94, nearly 2% lower on the day.

The phenomenon of negative interest rates, long thought of as impossible for practical purposes, is now becoming widespread. The BoJ joins the European Central Bank, Switzerland, Denmark and Sweden in having a negative interest rate on at least one of its official credit facilities. All five central banks are struggling with chronically low inflation, and are anxious to stop a destructive spiral from forming in which wages and prices chase each other lower.

That task is becoming ever harder as oil prices hit 12-year lows and the deflationary pressure out of China intensifies. Chinese producer price inflation is officially running at an annual rate of -5.9%, and many economists believe that the real figure may be even worse. Moreover, the yuan’s decline since October (4% in official terms against the dollar) has allowed Chinese factories to undercut those in the developed world still further. Japanese data earlier this week had showed a sharp slide in both industrial output and household spending. Inflation was stuck at 0.2% year-on-year in December, far from the BoJ’s 2% target.

“The BoJ has capitulated on QE,” said Lena Komileva, managing director of consultancy G+ Economics in London. She says the Bank had no choice but to act after weaker oil prices, emerging market capital flight and negative rates in Europe all pushed the yen higher, neutralizing its earlier efforts to reflate the economy through the trade channel.

Gabriel Stein, an analyst with Oxford Economics in London, said in a research note Thursday that negative rates are likely to become an established piece of the global financial furniture, given that the adverse effects that many expected hadn’t materialized. Stein pointed out that there hasn’t been a big rise in demand for cash at the expense of bank deposits, and banks haven’t generally tried to pass the higher costs that they incur through the policy by raising lending rates for new borrowers.

Thirdly, he said the ECB in particular may favor further rate cuts over more asset purchases in future. The ECB has repeatedly run into legal trouble in Germany every time it tries to depress interest rates by buying government bonds.