What Cato Gets Wrong About the Climate Snow Job 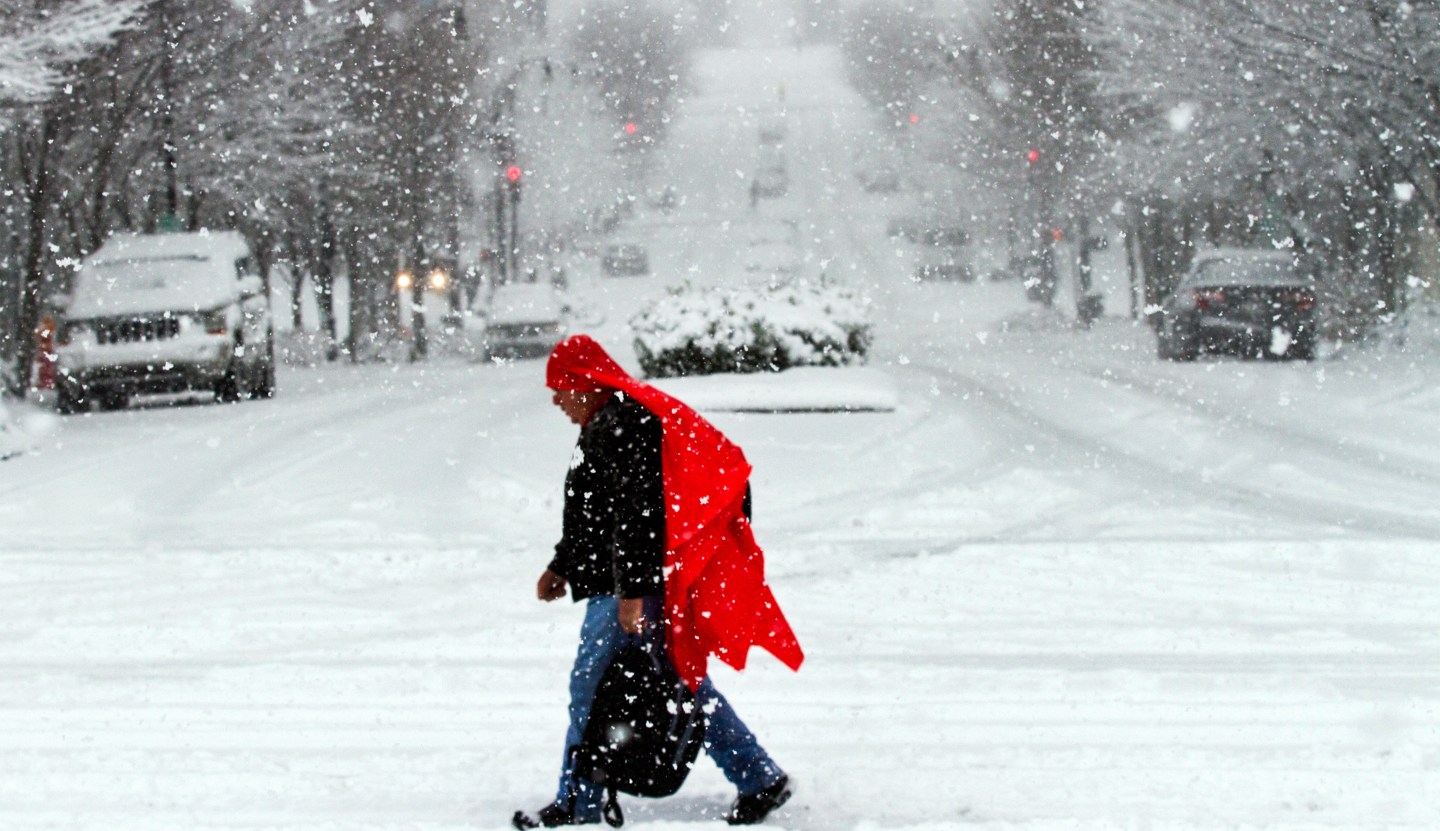 A man walks through heavy snow in downtown Nashville, Tenn., on Friday, Jan. 22, 2016. Much of downtown was deserted as state and city government offices were closed for the day. (AP Photo/Erik Schelzig)
Photograph by Erik Schelzig — AP

As various parts of the nation recover from the fallout of last weekend’s massive blizzard, the three feet of snow that winter storm Jonas dumped in parts of West Virginia and Maryland are prompting many to revisit the debate over the merits of climate change. In a recent editorial in The Wall Street Journal, in particular, the CATO Institute’s Patrick Michaels makes a number of scientifically inaccurate statements, whether about humans contributing to climate change, El Nino’s role in 2015’s record heat, the sensitivity of climate to greenhouse gases, or the connection between extreme weather and climate change.

Michaels opens with a description of temperatures, the warming of which peer-reviewed studies have repeatedly found to be caused by human emissions. The latest study, published Monday, finds that the odds of 14 of the 16 warmest years on record all occurring after 2000, would be one in 300,000 were it not for human-made warming. This is just one of many independent lines of evidence that human activity — namely the burning of fossil fuels — contributes significantly to warming.

Michaels attributes 2015’s record-breaking warmth to El Nino, but that is directly contradicted by what an annual report of temperatures by NASA has found. Gavin Schmidt, director of the Goddard Institute of Space Studies, told reporters earlier this month that even without El Nino, 2015 would’ve been the warmest year by far. An analysis of Schmidt and other scientist’s calculations puts El Nino’s contribution to the record at only about 10%. And to Michael’s prediction that things will cool down like they did after El Nino from 1997 to 1998, new research shows there’s now twice as much heat in the oceans as there was then.

Pointing to the satellite data, Michaels claims that we shouldn’t expect much more warming. Mainstream scientists, including some that run satellites similar to the ones Michaels cites, are quick to point out that the surface temperature record is much more robust than satellite data, and other points of evidence (Arctic sea ice melt, glacier melt, ocean heat, sea level rise, etc.) contradict the satellites. This and other issues are addressed in the US National Climate Assessment FAQ. New research also debunks Michaels’ claim that the climate isn’t as sensitive to CO2 as we think.

But the biggest problem with Michaels’ argument is this: By focusing on GDP statistics as a benchmark for extreme weather-related losses, Michaels ignores the debilitating human and environmental impacts not captured by GDP, such as the heat-related deaths of an estimated 2,500 people in the Indian heat wave last June. Munich Re doesn’t insure all of the structures that get damaged or destroyed, just some of the ones that are designed to withstand extreme weather. Even in developed economies, approaches like those of University of Colorado’s Roger Pielke Jr.’s, adjust damage for GDP growth, which is sort of like saying a storm didn’t cause damage if more economic activity is generated rebuilding than was lost. (Also, though 2015 was not as bad a year for reported economic losses as others in recent memory — due in part to the El Nino-induced wind shear that kept hurricanes from forming in the Atlantic — there were still 29 different weather disasters causing over a billion dollars worth of damage, the fourth most in the past 25 years.)

Human-induced climate change is real. The debate is over. We need to get serious about addressing it by reducing greenhouse gas emissions by 80% to 100% by 2050 or sooner. But here’s the good news: Leading cities around the world like London, New York City, Yokohama, Sydney, Copenhagen, Vancouver, Minneapolis and others are abandoning the dirty economy of the past and ushering in the clean economy of the future — and growing their economies in the process. Cities are showing it can be done. It’s time for others to embrace it too.

Johanna Partin is director of the Carbon Neutral Cities Alliance.