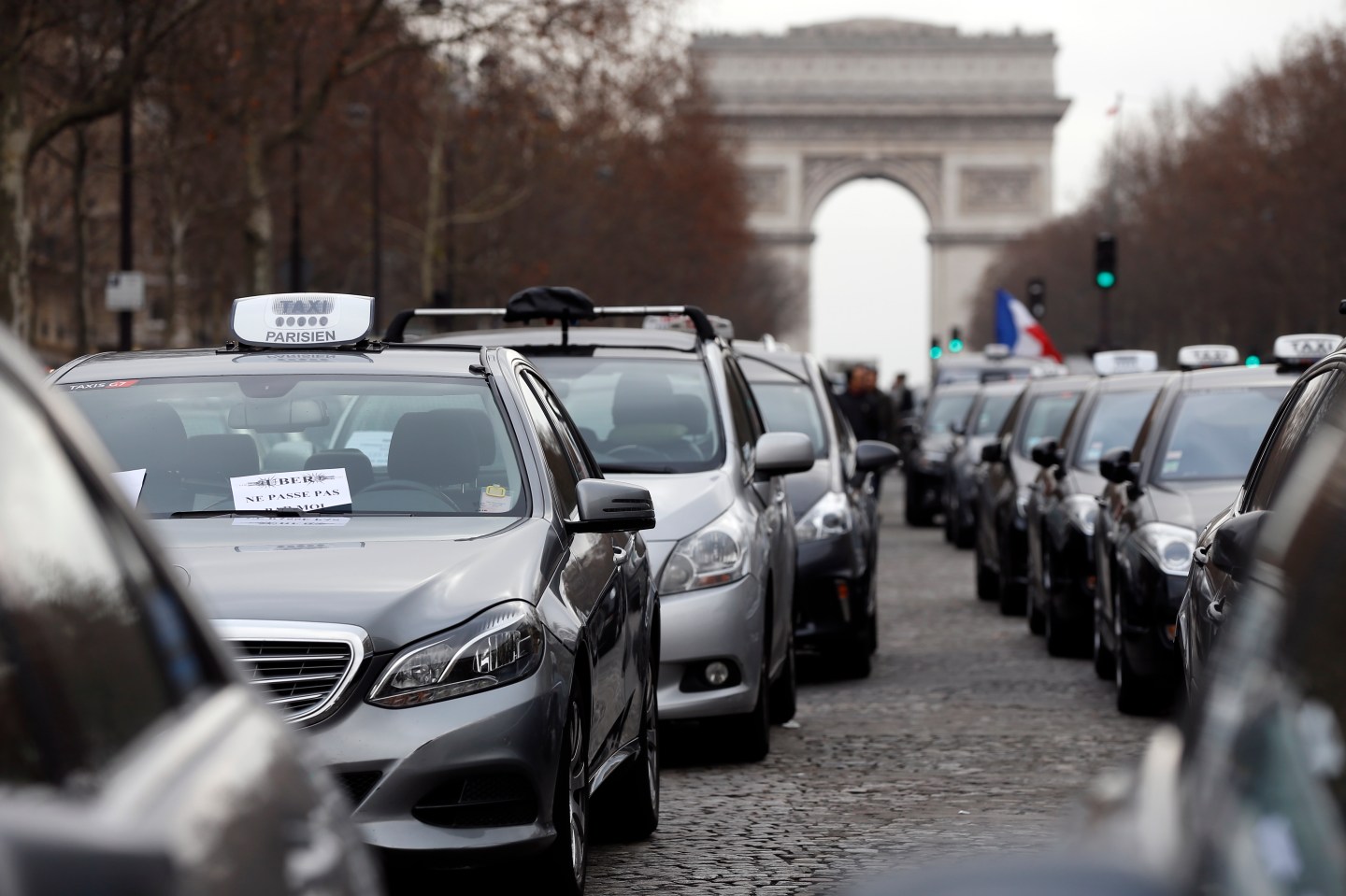 France’s ever-lovable taxi drivers are back practising their traditional sport Tuesday, blocking roads to airports and bringing traffic to a standstill across the country amid familiar scenes of chaos.

But in contrast to their last professional holiday, when they went so far as to upset the vacation of Courtney Love in their protests again ride-sharing app Uber, they’re not on their own today. They’ve been joined by public-sector workers from schoolteachers to nurses, air traffic controllers and civil servants, all of them up in arms about their shrinking purchasing power. Most public-sector pay has been frozen since 2010 as the French government has tried to keep its spending and debt levels from getting out of control.

Teachers’ unions boasted that a third of their members had walked out, while the education ministry said it was closer to 11%.

Around 1,200 taxis effectively blocked access to Charles de Gaulle and Orly airports at Paris with “go slow” actions. Police made 20 arrests after protesters blocked roads with burning tyres, smoke grenades and other objects around Orly and Porte Maillot, a key junction on the capital’s Périphérique ring road, according to the newspaper Le Nouvel Observateur.

Not everyone was taking it with the French public’s usual sang-froid. Two taxi drivers were taken to hospital with bone fractures after their blockade was rammed by an airport shuttle bus.

France’s Prime Minister Manuel Valls told parliament that the violence had been “impossible to allow”, but nonetheless received a delegation of taxi drivers’ leaders at his official residence shortly afterwards to hear their grievances.

For the taxi drivers, the main cause of falling incomes is still, indirectly, Uber, inasmuch as they argue that Paris still hasn’t enforced laws it passed last year to protect them against unregulated competition. For the air traffic controllers, the chief grievance is that their numbers haven’t expanded in line with the amount of traffic they have to direct, leading to overwork and stress.

According to the Organization for Economic Cooperation and Development, disposable income per capita has only risen 2.5% since 2007, when adjusted for inflation. As noted above, the long-cosseted public sector has fared worse than average during that period. Along with other Eurozone countries, France has struggled to keep a lid on public-sector wages against a background of uncomfortably high budget deficits and debt levels. Despite austerity, the country’s budget deficit has stuck around 4% of GDP, while the gross debt level is estimated to have risen from 64% in 2007 to over 95% in 2015.

The Minister responsible for dealing with the public sector unions, Marylise Lebranchu, told TV channel France 2 that she ‘hears’ the demands of the strikers, but said there was “very little” room for maneuver on public spending (President Francois Hollande had announced big increases in internal security spending after the Paris terrorist attacks in November). She nonetheless said she would push for a “symbolic” pay raise.