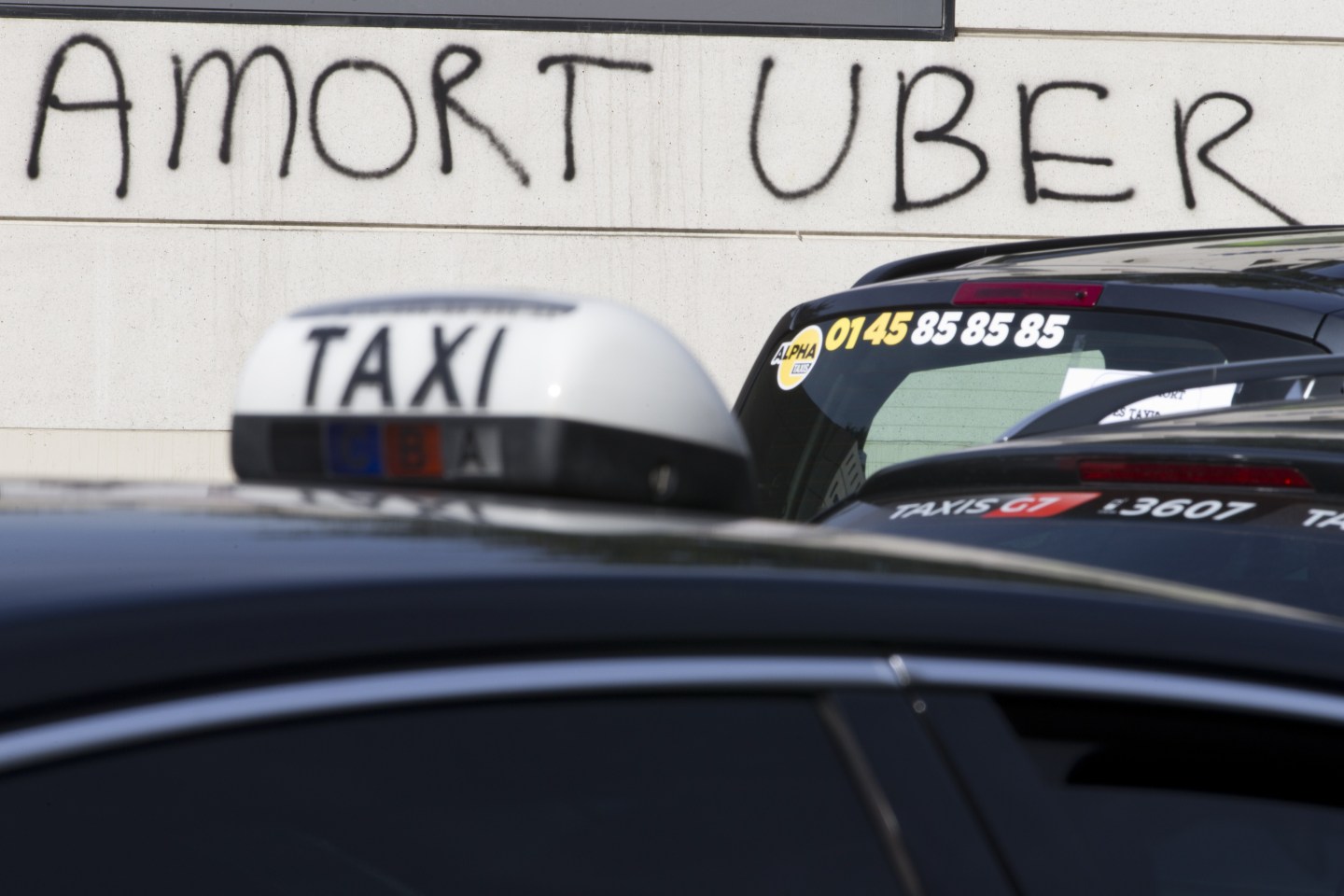 Graffiti that reads, " Death to Uber" as taxi vehicles block Porte Maillot, west Paris, on June 26, 2015, as drivers react furiously at what they see as unfair competition from Uber, which puts customers in touch with private drivers at prices lower than those of traditional taxis. French President Francois Hollande condemned violent protests against ride-booking app Uber after taxi drivers set fire to vehicles and blocked highways but he said the service should be taken off the road. AFP PHOTO / KENZO TRIBOUILLARD (Photo credit should read KENZO TRIBOUILLARD/AFP/Getty Images)
Photograph by Kenzo Tribouillard — AFP/Getty Images

French President Francois Hollande has called for the UberPOP ride-sharing service to be shut down after demonstrations against it by striking taxi drivers turned violent.

Speaking after a late-night session at a summit of European leaders, Hollande repeated the position of his government that UberPOP, which allows ordinary drivers to earn money by giving rides without the training or insurance required by law, is illegal. Registered taxi drivers allege that the UberPOP operates also makes it too easy for drivers to avoid declaring their income from the service.

UberPOP has already been banned in Germany, Europe’s largest market, on similar concerns.

“UberPOP must be dissolved and declared illegal, and the seizure of vehicles must be enforced…when authorised by judicial rulings,” Hollande said. “The sooner these rulings are made, the simpler the situation will be.”

He added that he understood the “exasperation” of those affected by the strikes, and condemned the violence.

Uber is currently disputing a new law that banned the service from the start of this year. It is continuing to offer the service (which has some 400,000 drivers) while it appeals to the Constitutional Court. The Court is expected to rule in October. In part, yesterday’s demonstrations were an expression of frustration at Uber’s ability to delay the enforcement of the law thanks to its deep pockets, filled by backers such as Google Inc. (GOOG) and Goldman Sachs & Co. (GS).

The strikes had caused chaos at major transport hubs around Paris and elsewhere Thursday, blocking access roads to Charles de Gaulle and Orly airports as well as the Gare de Lyon station that is one of Paris’ busiest terminals. The publicity from the strikes took on new dimensions when the former singer and widow of Kurt Cobain, Courtney Love, took to Twitter to describe an attack on the car that was carrying her.

we got out after being held hostage for an hour thanks to these two guys. I'm scared out of my wits.… https://t.co/cAOELz463U

how on earth are these people allowed to do this? the first car was destroyed, all tires slashed… https://t.co/lWuFRMG6I5

paid some guys on motorcycles to sneak us out, got chased by a mob of taxi drivers who threw rocks, passed two police and they did nothing

they've ambushed our car and are holding our driver hostage. they're beating the cars with metal bats. this is France?? I'm safer in Baghdad

Ms. Love was still in fighting mood Friday, if displaying what the French might think of as a regrettable lack of perspective.

The United States needs to ban all travel to France! #UberPop pic.twitter.com/MEUhkBBqTW

UberPOP claims some 400,000 drivers in France. Under the new law, unregistered drivers can face up to a year in prison, the seizure of their car, and a $16,500 fine.