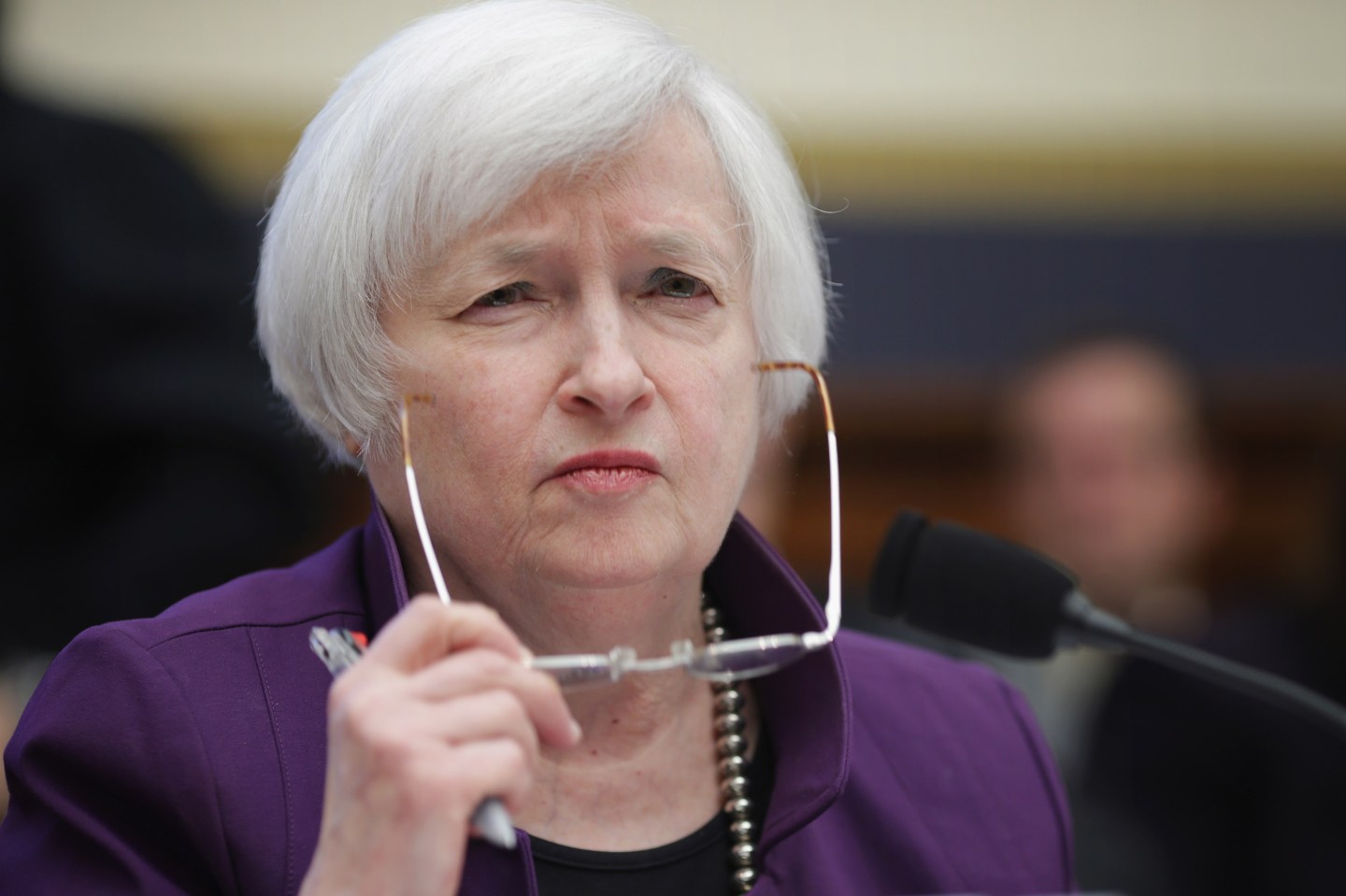 The economy could be falling apart faster than Wall Street and the Federal Reserve realize.

Janet Yellen and her colleagues on the Federal Open Market Committee are meeting again this week. A lot appears to have changed since they last met six weeks ago. The price of oil has taken another nose dive, driven by in part by fears of a quickly slowing Chinese economy. And that’s spooking investors in European and American stock markets.

Nonetheless, Fed officials have tried to reassure investors that the central bank’s plan to slowly-but-surely raise rates over the course of this year and beyond hasn’t changed. Last week, New York Fed President William Dudley said that while some recent economic indicators have been softer than expected, he still expects to the economy to grow “slightly above its long-term trend” in 2016, and that the unemployment rate will continue to drop.

But the Fed, and Wall Street in general, might be underestimating the recent downturn in growth.

The above chart comes from the Atlanta Fed. Back in 2014, the regional Fed bank rolled out a tool that estimates GDP growth in real-time. The idea is that it will pick up turns in the economy faster than the models that economists have traditionally used. And what the model is predicting is that the economy turned significantly worse in the fourth quarter, rising just 0.7%. And as you can see from the green line, that’s lower than some of the most pessimistic predictions from economists.

What is the model picking up that the economists are missing? First of all, exports. They have been weaker than expected. That gives support to the idea that the weak economic activity abroad could have a meaningful affect on the U.S. economy, possibly pulling us closer to recession. Second, retail sales numbers haven’t been impressive either. That suggest consumers are pessimistic as well, decided to pocket the savings they are getting from cheap gas, rather running out and spending.

Not everyone thinks that the likely disappointing GDP release on Friday is a sign of a coming recession. Jim O’Sullivan, Chief U.S. economist with High Frequency Economics, reminded clients in a recent analyst note that “GDP is much more volatile than than employment from quarter to quarter,” and we’ve seen no let up yet in employers desire to hire workers. Despite sometimes wild swings in quarter-by-quarter growth, O’Sullivan points out, the U.S. economy has steadily grown in recent years at 2 to 2.5% annual rate.

While this is not spectacular growth, it’s certainly strong enough to keep the unemployment rate falling, and theoretically at least, that will eventually push up wages. This anticipation of higher wages due to lower unemployment is what has the Fed convinced that gradual rate increases is the way to go, despite turmoil in global markets.

At the same time, even O’Sullivan admits that job growth and GDP data are lagging indicators. Stock markets are forward looking, and so it’s plausible that the volatility we’re seeing is foreshadowing another recession. At the very least the optimism that has been around at the start of the past few years is certainly gone. A recent survey of economists by CNBC showed them expecting growth of just 2.17% this year. That’s in line with what the economy has actually grown for the past few years, but it’s lower than the roughly 3% annual economists had been predicting in years past. In other words, either the economics profession is learning from its forecasting failures, or we should prepare for even bumpier roads ahead.