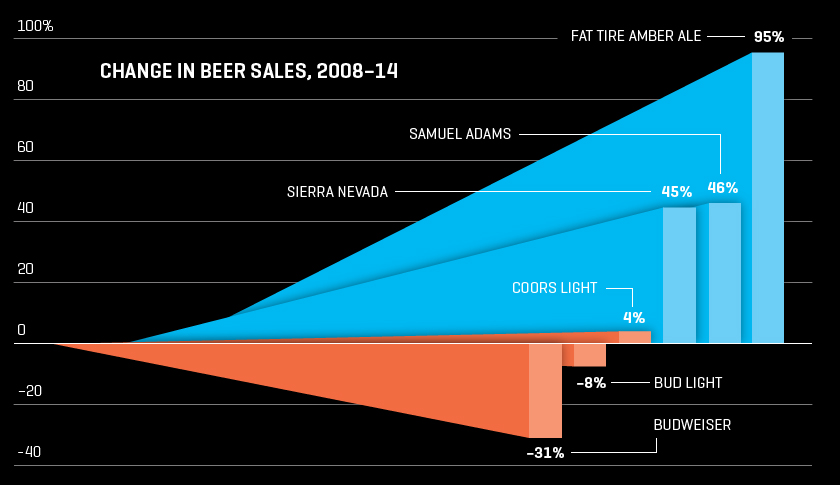 When it comes to Super Bowl beer ads, consistency is key, in the form of sturdy Clydesdales and manly men. But last year Budweiser (BUD) conjured up a new theme: trash talk. “Let them sip their pumpkin peach ale,” a 2015 ad teased, mocking craft-beer lovers who have scorned domestic lagers. “We’ll be brewing some golden suds.”

Snobby it may be, but the craft-beer industry is having the last laugh. The Brewers Association estimates that craft brands more than doubled their share of the $100 billion beer market, to 11%, in the past four years, while sales of mass-market beer stagnated.

How have the big brewers combated the trend? By guzzling the competition. In 2015, 19 craft-beer deals worth $13 billion were announced in the U.S., according to research firm Dealogic. AB InBev, MillerCoors, Constellation Brands, and Heineken—which together control 81% of the U.S. market—all announced deals. Heineken’s 50% stake in Lagunitas and Constellation’s nearly $1 billion Ballast Point takeover were the first deals either company made in the craft category. “We see the future growth in the beer business coming from two areas: our Mexican import business and craft,” says Constellation CEO Rob Sands.

You’re likely to see more of the same in 2016. Bud parent company AB InBev bought three craft brewers in the span of five days in December. And that pumpkin peach ale Bud mocked? AB InBev bought the brewer that made it—weeks before that ad ran. If you can’t beat them, buy them.