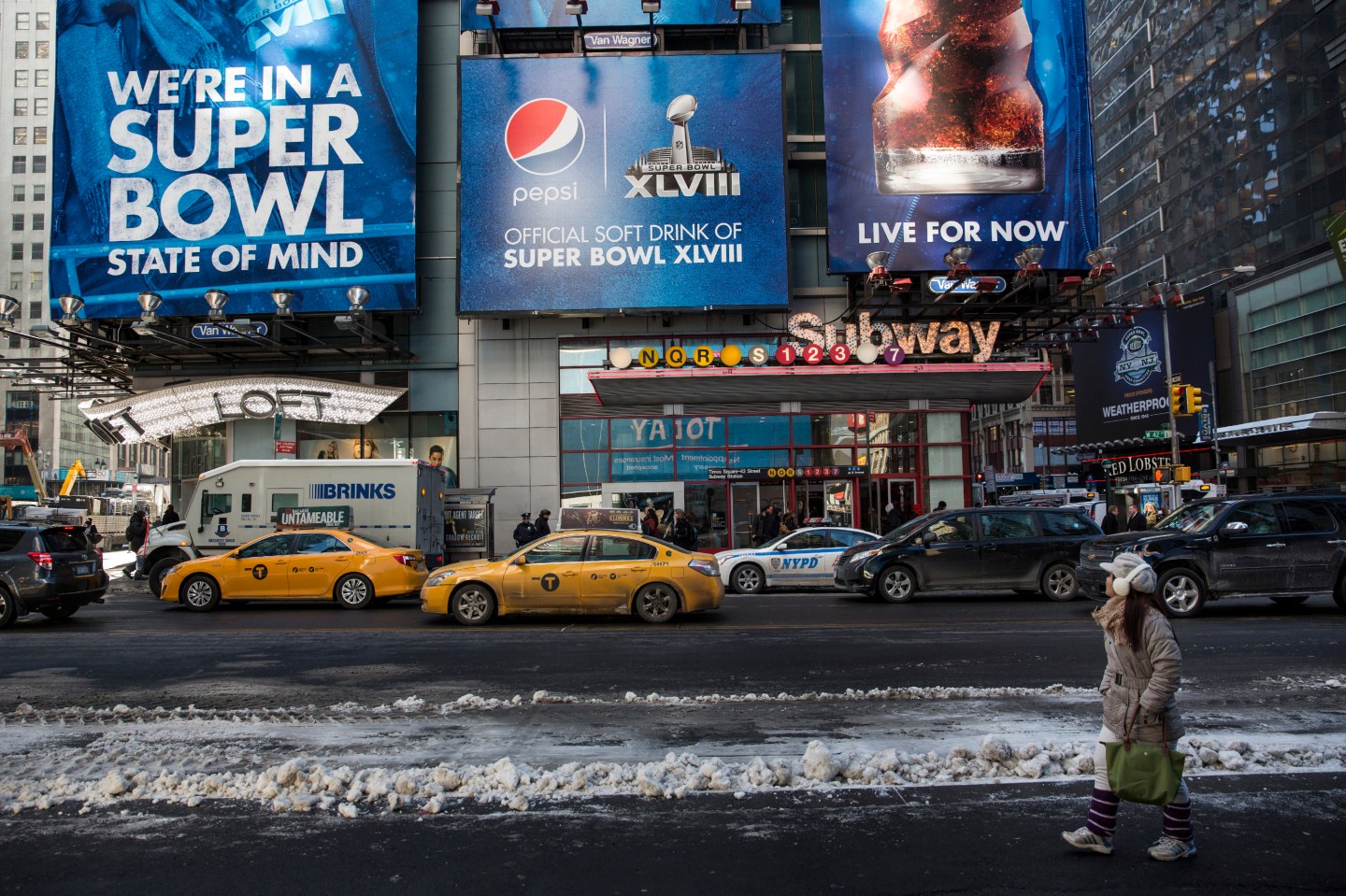 NEW YORK, NY - JANUARY 24: A woman walks past an advertisement referencing Super Bowl XLVIII, which will be played in East Rutherford, NJ in two weekends, on January 24, 2014 in Times Square in New York City. In preperation for the Super Bowl, New York City is turning sections of Times Square and Broadway into "Super Bowl Boulevard," which will feature events such as games, concerts and a toboggan run. (Photo by Andrew Burton/Getty Images)
Photograph by Andrew Burton — Getty Images

With the promise of millions of eyeballs on the Super Bowl on Feb. 7, you would think that advertisers who made their debut for the big game last year would return in droves.

Instead, the risks of spending a huge portion of a company’s marketing budget and seeing little reward for it weigh heavily on second-year advertisers. Companies like cruise operator Carnival Corporation and adhesives maker Loctite, who were among 15 new entrants last year, are not planning to return, reported the New York Times.

A company that is planning a second Super Bowl ad—Avocados From Mexico, which does nonprofit marketing for two avocado associations—reportedly spent nearly 30% of their $18-million advertising budget on thirty seconds of commercial time at the Super Bowl, the publication added. This has upped the pressure for the company, which saw positive sales jumps after their Super Bowl ad last year, to deliver results on this year’s ad time. Other returning sophomore campaigns include those by Skittles and Wix.com.

“In a weird way, it’s more stressful because you have to come back,” Jay Russell, chief creative officer of GSD&M, the advertising agency for Avocados From Mexico, told the Times.

The ad rate for Super Bowl 50 has been pegged at $5 million for 30 seconds of airtime on broadcast network CBS, reported Ad Age. Over the last five seasons, the estimated asking price for a 30-second Super Bowl ad has increased by an average of 11.1% year over year. According to research firm Kantar Media, the game has generated around $2.19 billion in advertising spending from 2005 to 2014:

What the Super Bowl does help, however, is increase the social media chatter around the brand. Roughly 70% of the online chatter about Avocados From Mexico’s TV ads were related to the Super Bowl, reported the newspaper.