Social Media Use By CEOs Is Increasing—Slowly 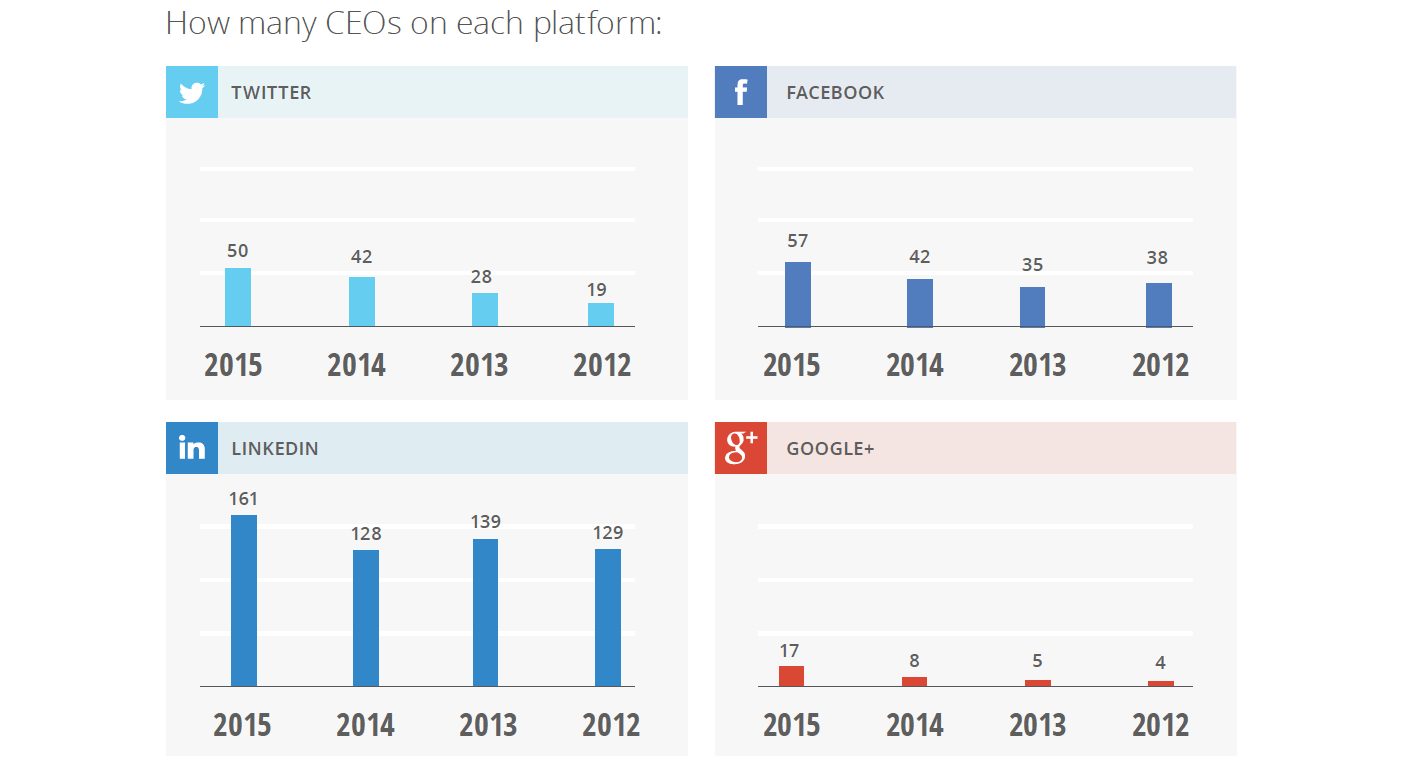 It’s been nearly two years since Fortune debuted its Social Register, a list of the most active chief executives on Facebook, Twitter, and other social networks.

While researching for the project, I recall being surprised at how many high-profile CEOs—especially those leading Fortune 500 companies—lacked a social presence of any kind. HP (HPE) CEO Meg Whitman hadn’t updated her feeds since her failed 2010 campaign to be governor of California. Apple (AAPL) CEO Tim Cook had only just joined Twitter, and it was a rather timid affair. Ford (F) CEO Mark Fields still lacks a meaningful presence, though in his defense he hadn’t yet taken the automaker’s top job in 2013.

It’s hardly a surprise why. For years, executives have seen their own social media activity as a distraction at best and a liability at worst.

What’s more, that increase is largely attributable to either new CEOs or new companies to the Fortune 500 list—not because of changing habits among the executives who have been on the list for some time.

There are other findings. LinkedIn (LNKD) unsurprisingly continues to be the social network of choice for executives. Twitter (TWTR) now features more Fortune 500 CEOs, but they’re generally less active on the platform—a reflection, perhaps, of the service’s greater problems. And video has become a factor for the group, just as it has for regular users.

—70% of CEOs engage on only one social network.

—Just two CEOs, Marc Benioff of Salesforce (CRM) and Dara Khosrowshahi of Expedia (EXPE), are on at least five of the specified networks.

—Of those Fortune 500 CEOs on Twitter, 16 have tweeted less than 25 times total. Among them: Ginny Rometty of IBM (IBM) and Warren Buffett of Berkshire Hathaway (BRKA). Though to be fair, Buffett enjoys the most retweeted tweet, despite having updated just seven times.

—The most engaged CEO on the F500 list is Jack Salzwedel of American Family Insurance, who tweeted almost 350 replies this year.

So what’s holding chief executives back? The reasons remain the same. They’re too busy, the return on investment is hazy, and too often CEOs don’t know how to use the platforms well, even as the value of social media grows.