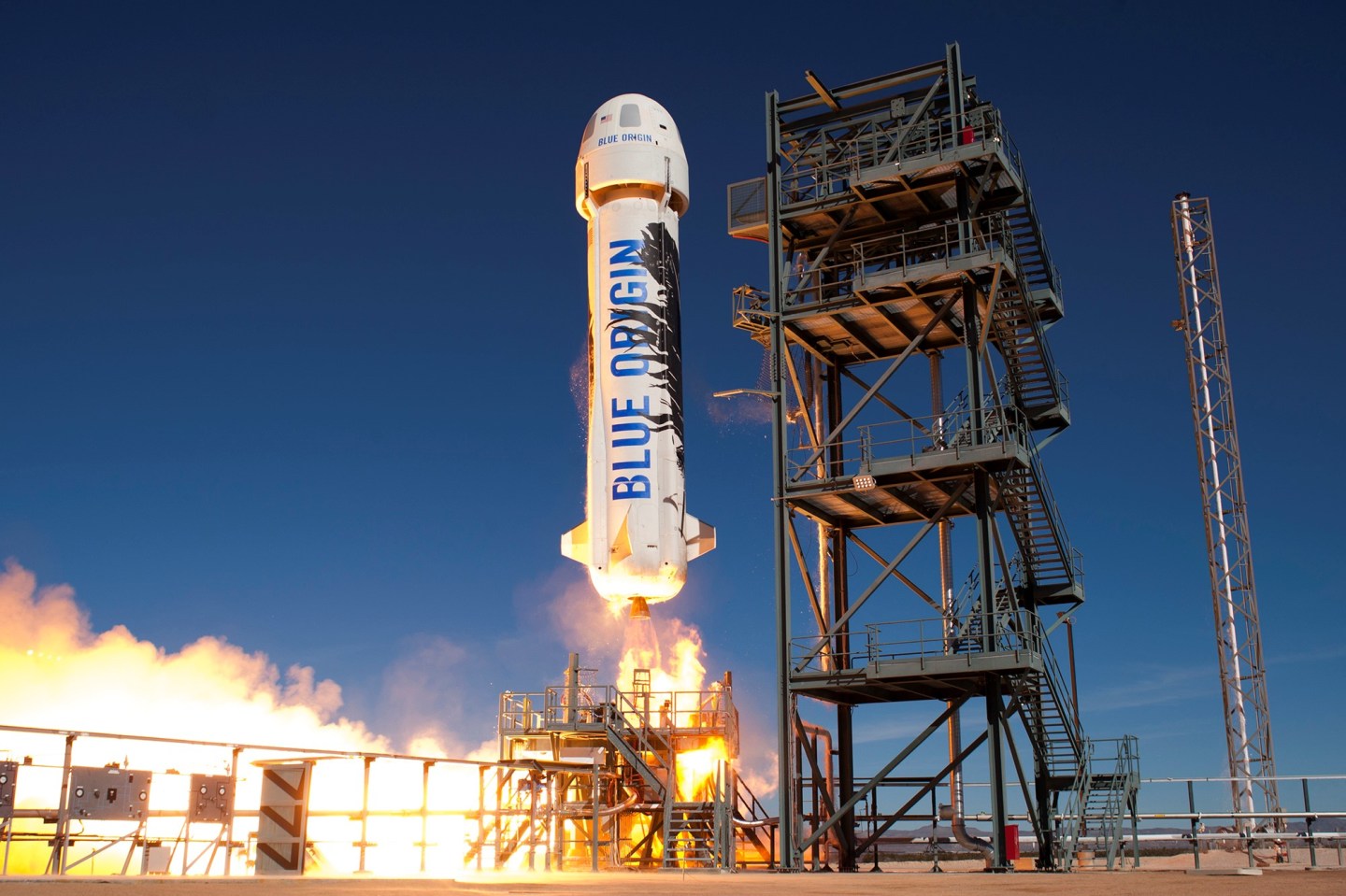 Blue Origin stole another “first” out from under Elon Musk and SpaceX on Friday, sending its New Shepard rocket—the same one it launched and landed back in November—to space and back a second time, marking the first time a reusable rocket has actually been reused.

According to Blue Origin, the rocket soared 63 miles skyward, briefly leaving Earth’s atmosphere before returning for a soft, vertical landing at the company’s Texas test facility. In the ongoing game of one-upmanship between Blue Origin—owned by Amazon (AMZN) founder Jeff Bezos—and Musk’s SpaceX, Blue Origin has decidedly won another round. What exactly that means for the business of moving people and cargo to orbit is somewhat less clear.

The landing and recovery of first stage rocket boosters is something of a holy grail in the commercial spaceflight business. Since the earliest days of the space race, first stage rocket boosters—where the bulk of the engines and most of the fuel are stored—have been discarded. Those boosters and their cost-intensive rocket engines either burn up on their descent through the atmosphere or splash down unsalvageable in the ocean after separating from the rest of the rocket and its payload.

Rocket boosters that can return for a soft landing on Earth let commercial spaceflight companies like Blue Origin and SpaceX refurbish and reuse them, potentially trimming tens of millions of dollars from launch costs. That in turn could make space more accessible to everyone and open up completely new business models in orbit as the price for rockets drops from the tens of millions to the millions and perhaps even to the sub-$1 million range.

That’s got both SpaceX and Blue Origin scrambling to perfect their reusable rocket tech, and each one aiming to out-hype the other while doing so. In November Blue Origin surprised just about everyone in the industry when it launched and then landed its suborbital New Shepard rocket at the company’s landing site in West Texas, making it the first company to successfully land a rocket. In December, after having failed twice to land its 14-story Falcon 9 rocket on an ocean barge, SpaceX successfully landed a rocket on dry land at Cape Canaveral, Fla.

When SpaceX flew again earlier this month, it chose to attempt another landing out to sea. It also elected not to reuse the rocket it recovered from its successful landing in December, opting to keep that rocket for its historical significance (a prescient move, considering that other landing failed). That opened the door for Blue Origin to be the first to actually reuse a rocket in practice, and on Friday it did exactly that.

Blue Origin plans to launch and land that same rocket “again and again” this year, Bezos wrote in a blog post summing up the historic flight. That puts the pressure on SpaceX to prove it can do the same with the Falcon 9.

But while Blue Origin continues to beat SpaceX to technological milestones, SpaceX is still beating Blue Origin in one very key metric. While Blue Origin is making history, SpaceX is making money. The latter already has billions in contracts to carry cargo—and eventually people—into orbit, and each of its landing attempts has piggybacked on a successful commercial mission paid for by a customer. Blue Origin, by contrast, is launching rockets on its own dime.

When exactly Blue Origin will start making money remains unclear, though the company has entered into a joint venture with legacy aerospace behemoth United Launch Alliance (itself a joint venture between Lockheed Martin (LMT) and Boeing (BA)) to develop Blue Origin’s new heavy-lifting BE-4 engine. Building and licensing technology with and for other spaceflight companies could turn into a profitable sideline for Bezos and company as Blue Origin transitions toward building a series of larger rockets capable of competing with SpaceX not just for prestige, but for business.

We could get a glimpse of what a real commercial space race will look like sooner rather than later. “We’re already more than three years into development of our first orbital vehicle,” Bezos wrote in his post-launch blog post. “Though it will be the small vehicle in our orbital family, it’s still many times larger than New Shepard. I hope to share details about this first orbital vehicle this year.”