This German Gun Maker Wants You to Buy More Guns 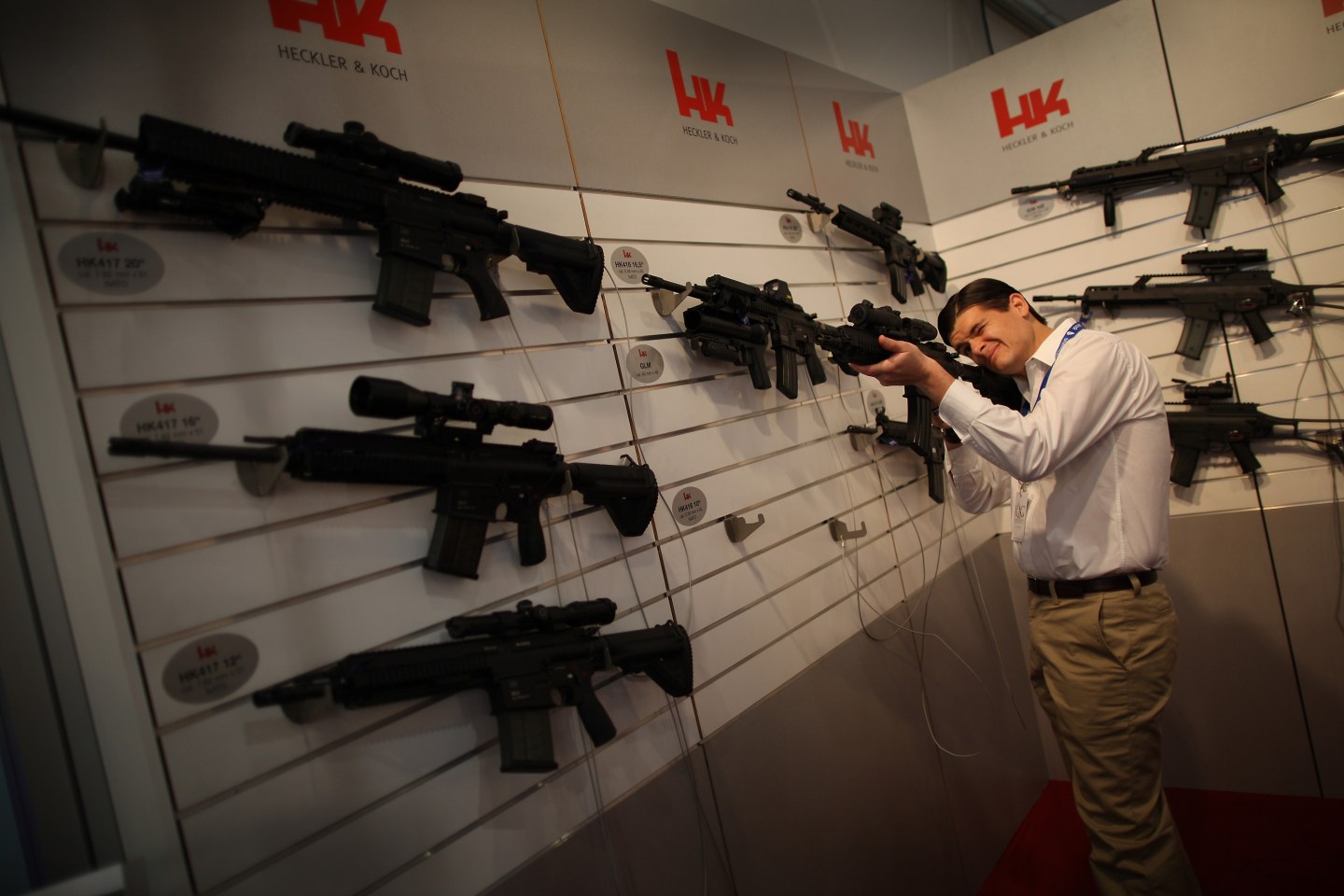 LONDON, ENGLAND - SEPTEMBER 13: A visitor tries out a Heckler and Koch assault rifle at the Defence and Security Exhibition on September 13, 2011 in London, England. ExCeL London is hosting the exhibition with hundreds of manufacturers from all over the world displaying their hardware. (Photo by Peter Macdiarmid/Getty Images)
Photograph by Peter Macdiarmid — Getty Images

German gun maker Heckler & Koch will try to sell more guns to civilians in the United States, forced by Germany’s restrictions on arms exports to the Middle East to look for revenue growth elsewhere, its majority owner told a newspaper.

The move comes at a time when U.S. President Barack Obama faces a political storm for bypassing Congress with new measures to tighten U.S. gun rules.

“If politics force us to generate practically no sales in the Middle East, we have to look for alternatives,” daily Die Welt quoted Andreas Heeschen, who owns 51 percent of Heckler & Koch, as saying.

“We will expand our NATO business and the U.S. civilian business. We are the Porsche of weapons on that market,” said Heeschen, a 55-year-old German investor who bought the firm from British Aerospace – now BAE Systems – in 2002.

In economic terms, he said he saw the sale of guns to civilians in the United States as very lucrative.

Gun sales is a sensitive topic in the United States, where a series of mass shootings has punctuated President Obama’s time in office and the National Rifle Association is a powerful lobby group feared and respected in Washington for its ability to mobilize gun owners.

Concern that Obama could succeed in tightening gun laws has helped push up the shares of gun makers as investors hope for a rush of sales ahead of new restrictions, with Smith & Wesson’s stock up around three quarters in the past year and Sturm Ruger gaining 37 percent.

Heckler & Koch, which listed some of its shares on Euronext via a private placement last year, is one of the world’s most high-profile gun makers. Its HK416 assault rifle is said to have been used to kill Osama bin Laden and its G36 rifle is standard issue for armies across the globe.

However, German restrictions on arms exports to the Middle East caused Heckler & Koch’s annual earnings before interest, tax, depreciation and amortization (EBITDA) to drop to around 25 million euros ($27 million) from 60 million in 2014.

The group also came under pressure earlier this year, when a report by German customs authorities found the company had sold guns that went to some Mexican states in violation of an export ban that sought to limit arms sales to allegedly corrupt police forces.

Heeschen took a step back from active leadership of the Oberndorf, Germany-based company this week, handing over to a new leadership team headed by Norbert Scheuch, formerly the chief of auto parts retailer A.T.U. Auto-Teile Unger.