What the Rams Relocation Really Means for St. Louis and L.A. 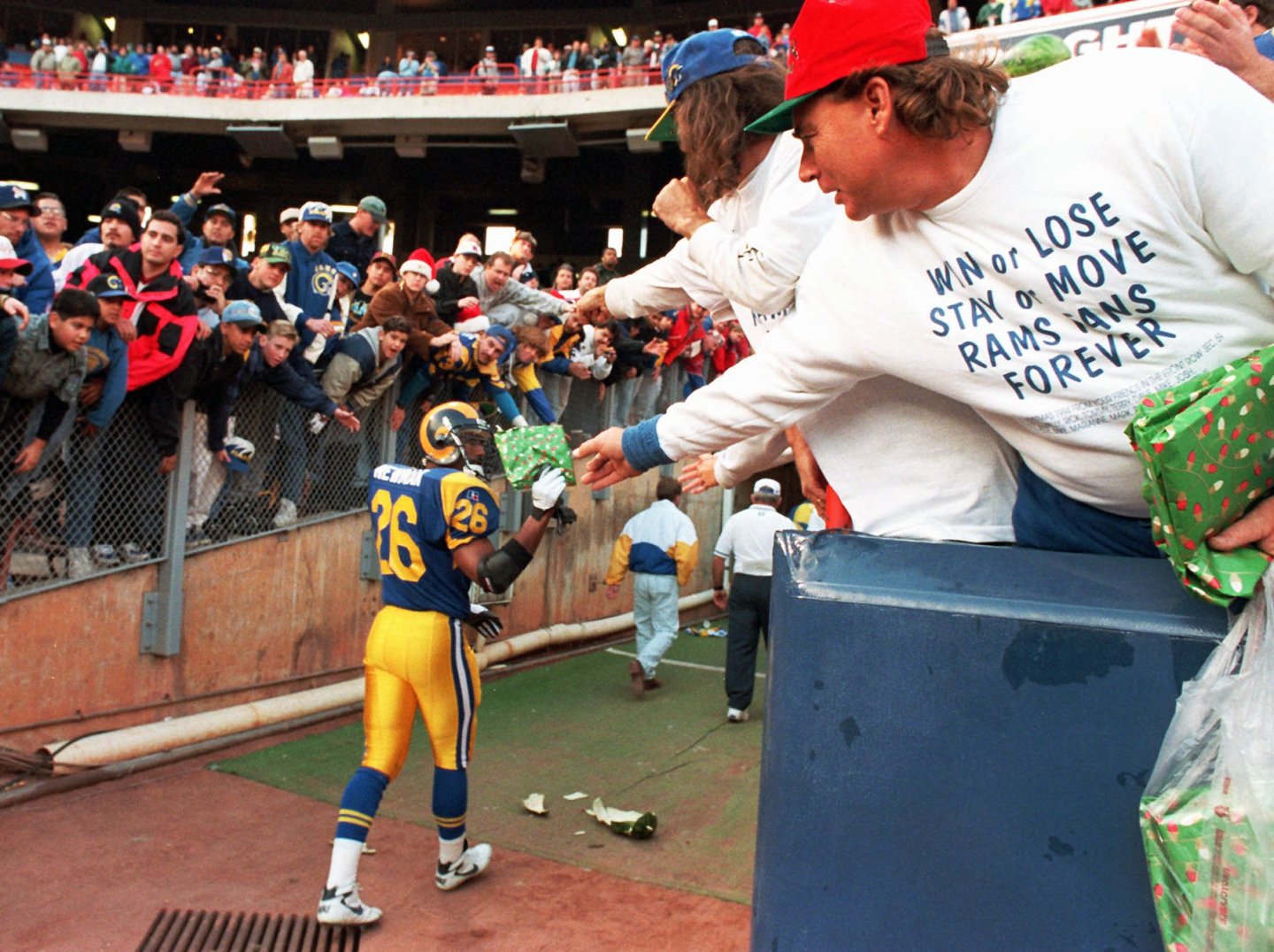 An unidentified Los Angeles Rams fan, wearing his sentiments on his shirt, hands Rams' safety Anthony Newman a gift after the Rams game against the Washington Redskins Dec. 24, 1994 in Anaheim, Calif. Abandoned by the Rams and Raiders, Los Angeles has yawned its way through its first season in a half-century without a pro football team. (AP Photo/Chris Martinez)
Photograph by Chris Martinez — AP

There is no joy (and some anger) in St. Louis: its beloved Rams are returning to Los Angeles. St. Louis is now left thinking about what this means for its identity as a city. Meanwhile, after barely shrugging when both the Rams and Raiders decamped two decades ago, L.A. is all in on football once again. But does the move affect either city’s bottom line?

The good news for St. Louis is that there is little evidence that having a sports team, especially a football team, improves a city’s or region’s economy. Despite overhyped claims from team owners and elected officials wearing team gear, countless academic studies show that publicly funded stadiums have little effect on jobs and growth.

In fact, spending hundreds of millions of taxpayer dollars on a stadium is almost never a good idea, and a football stadium is probably the worst investment. NFL teams host only eight regular-season games each year, so the site goes unused for most of the year. Also, the desire for acres of parking lots means stadiums are typically placed in the suburbs—far from businesses that could benefit from additional foot traffic—and the sport’s beloved pregame tradition (tailgating!) means fans bring food and drinks to the game rather than visit neighborhood bars and restaurants. If anything, cities stand to benefit far more from downtown baseball stadiums, which host 81 games a year and attract fans who regularly spend money at downtown establishments before and after the games.

So maybe St. Louis should count itself lucky for not shelling out $400 million in taxpayer dollars to one of the richest people and most profitable industries in the country for a new stadium—especially because the city still owes more than $100 million in bond debt on the current one. Furthermore, according to the St. Louis budget director, the city’s budget faces “structural imbalances” every year for the foreseeable future. St. Louis’ limited funds might be better spent on education, transportation, and public safety. As for economic development, nothing is preventing the city from investing in retail, restaurants, and other attractions that residents (and not just tourists) can use and enjoy every day.

Of course, there are those who feel one’s identity as a major city is validated with a sports team. Ironically, this is typically more important for smaller cities that often lose teams because of their limited market size. However, with all due respect to the city’s diehard football fans, St. Louis is home to one of baseball’s most iconic franchises, the Cardinals (and its new downtown stadium) and one of the NHL’s oldest hockey teams, the Blues (with its own downtown arena). Don’t worry, St. Louis, you’ll still get plenty of love on ESPN.

So St. Louis will be okay, but what changed for Los Angeles? Why has a city that’s gone without football for 20 years become so attractive that three teams have tried this year to move into the area?

The main incentive for the NFL was likely TV revenue. All NFL owners (who had to approve the move) share in television revenue, so planting a team or two in the second-largest television market increases revenue for everyone. And while Rams’ owner Stan Kroenke must share ticket sales and television fees with the league, he gets to keep all the revenue from luxury boxes – which will certainly be higher in L.A. than St. Louis.

The new stadium is also a surprisingly decent deal for Californians because neither Inglewood, where the stadium will actually reside, nor the state is offering much financial assistance. While statements asserting “there will be no public dollars, no taxpayer dollars used for this project” are not true, the city isn’t taking on new debt or responsibility for the stadium. The city will provide tax breaks and public payments to reimburse the team for road improvement and game-day security. But Inglewood only contributes after the project generates $25 million in annual tax revenues and the payments are for public purposes.

So will the NFL boost L.A.’s economy? Plans for the new stadium include entertainment, retail, and residential development. However, as with all sports-inspired activity, football would shift rather than create new economic activity. And that’s only if fans pick the NFL over other entertainment options. L.A. hardly lacks entertainment options, and fan indifference was in part why the Raiders and Rams left.

Ultimately, the economic impact of the Rams’ move will probably fall far short of the hype in both cities. But in the process, neither St. Louis nor L.A. did substantial harm to their municipal budgets. In the warped world of publicly financed stadiums, this counts as a rare victory for the cities.