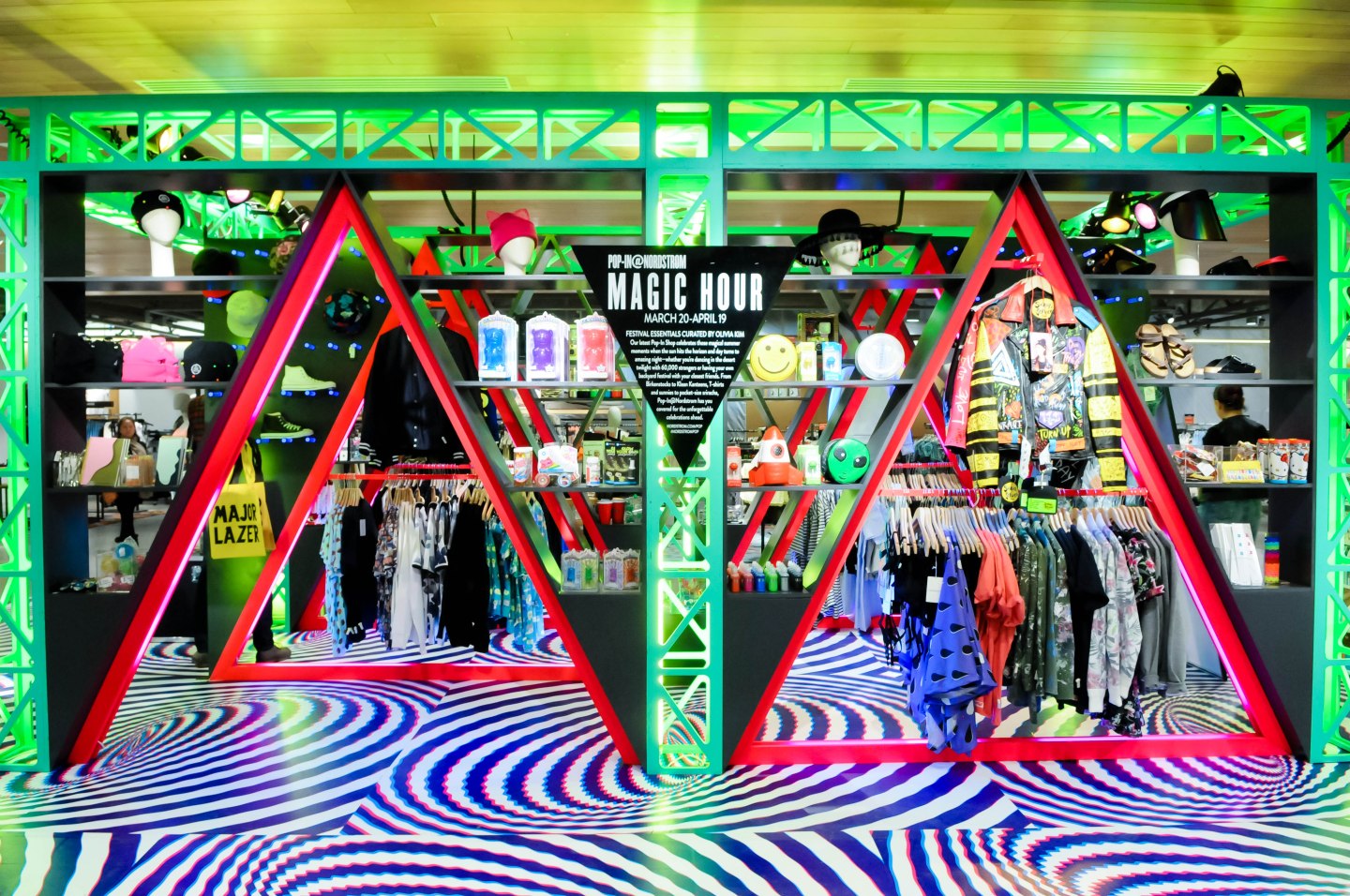 American department stores have been pillars of retail for well over a century. Saks, Bloomingdales (M), and Lord & Taylor were founded back in the 1800s, while their competitors such as Barneys are relative upstarts, launching during the Roaring 20s. For many years, their hold on consumers was absolute. But in an age when customers can just as easily shop from their sofas, the American department store is facing flagging sales.

Blame it on the weather, the strength of the dollar (making tourists less likely to splurge while in the U.S.), the proliferation of discounts even on designer goods, the fact is that many luxury shoppers –millennials in particular– aren’t as willing to venture forth into department stores.

Last year, Macy’s announced it would close up to 40 stores, due to poor sales. Even Nordstrom’s, the upscale retailer that normally outperforms its peers, found itself in a bit of a retail slump late last year.

And so traditional luxury department stores are busy trying to reinvent themselves for the digital age, notes Business of Fashion. From Neiman Marcus to Nordstrom, high-end chains are using a variety of strategies to inject a little excitement and entice new customers to step inside their brick and mortar locations and stay to shop. Here are some of the ways they are trying to change the game.

In just a few weeks, Barneys, the luxury department store chain known for its cutting edge chic, will return to its roots with a grand re-imagining of a new location. The store will open where the original once stood on 17th Street in the swanky Chelsea section of Manhattan.

A massive spiral staircase, built as a modern homage to the original will dominate the selling space and connect the floors adding drama and distinction that recalls the grandeur of yore. “Customer experience is something that is extremely important to us,” Barneys chief operating officer Daniella Vitale tells Fortune. Within the walls, a curated edit of Barneys XO “Exclusively Ours” brands and capsule collections not found at any other retailer (sorry Amazon) sold by knowledgeable staff, as well as mobile technology that links in-store shopping with e-commerce to make the whole experience more personalized to the individual customer.

Both Saks and Barneys are building out new eateries to sate the starving shopper. At Saks flagship on Fifth Avenue, a three year renovation is underway which is anticipated to be complete by mid-2018. Among the areas that will be improved are the store’s terrace overlooking Rockefeller Center—which has not previously been open to the public—will be one dining spot among several in the store done in partnership with the Parisian restaurant L’Avenue. Other dining spaces throughout the store will serve breakfast, lunch, and dinner.

“We are designing the store with a decision filter geared towards driving customer experience, not just shopping,” says Saks president Marc Metrick. As such, he says the store will also be offering alternative options like juice bars or champagne bars which they have not had before.

WATCH: This Brick-and-Mortar Retailer is Bringing the Story Back to Stores

Departments stores may be in competition with e-commerce retailers, but now they’ll also be angling to get customers to come in for a massage, makeover, or a hair cut. Metrick says Saks will be a contender. “Our beauty offering is being expanded to include services like nail bars, brow bars, and other spa treatments,” he explains, because “It’s no longer about the “act of shopping” it’s about the “experience of shopping.”

The Memory Mirror at Neiman Marcus

At Neiman Marcus, remodeling has amped up the stores’ use of technology in displays and in personal shopping suites. The newly revamped personal shopping suite of Catherine Bloom includes a Memory Mirror which is in use in about a dozen stores. “The Memory Mirror captures images and video of everything you try on, allowing you to see outfits side by side as well as a 360-degree view,” Tom Lind, senior vice president of corporate strategy, Properties and Store Development of Neiman Marcus Group. The images can be shared via email, social media or with a sales associate, Lind says.

The Jewelry Salon at Bergdorf Goodman

Pinning hopes on the truism that diamonds (and other bling) are still a girl’s best friend, Bergdorf Goodman gave its Jewelry Salon a major makeover this year. The store-within-a-store provides what it describes as a "glimmering" space filled with glass and mirrors to peruse its "exclusive" offerings from designers.

The Jewelry Salon will also feature a private viewing room where customers can try items on without being seen by other shoppers.

Pop in to the pop up

Nordstrom is betting that people who tire quickly of treading the same aisles in stores will be enticed by the novelty of a new series of pop-up shops. The Pop-In @Nordstrom is an ongoing initiative by Olivia Kim, Nordstrom’s director of creative projects. Currently featured in 8 of the chain’s locations each shop will get its own custom built setting. “We collaborated with friends and friends of friends who created items just for us, which will be sold in limited quantity,” said Kim in a statement. Think vintage handbags, customized Saint James striped shirts, art books, and gift items from Paris-based retailer Merci. “I love the frenzy that’s created from a pop-up shop concept – that spontaneity and emotion is one of my favorite things about working in retail. I love getting people excited to shop,” she says.

Won't mix business with pleasure. For any and all details, pop over to @sjpcollection. Yours forever, Sj x

Another effort to lure shoppers takes a page from department store playbooks of yore. Trunk shows and designer appearances are alive and well at Saks which regularly schedules celebrity events featuring the likes of Michael Kors and makeup maven Bobbi Brown. “Even if they don’t transact at that moment, you’ve now triggered a connection with them,” Saks president Marc Metrick told Business of Fashion. “That will translate to another visit with an intent to purchase.”

My old friend Fawn. In Candy satin. No filter. I'm serious. Are you at @bloomingdales 59th Street yet? X, Sj

The celebrity frenzy to catch a glimpse of Sarah Jessica Parker was too sizzling to resist. Bloomingdale’s snagged the Sex and the City’s star to design an exclusive shoe line and her appearance at the Manhattan location drew massive crowds jockeying to buy a pair and get an autograph. It helps that SJP has an extensive social media following. Both her personal Instagram and the shoe collection’s feeds were inundated with comments, likes, and commerce. One brand ambassador was monitoring the feeds and helping people place special orders.

Lydia Dishman is a business journalist covering innovation, entrepreneurship and style. She is a regular contributor to Fast Company and has written for CBS Moneywatch, Entrepreneur, The Guardian, Popular Science, and the New York Times, among others.