McDonald’s Is Adding This Weird Topping to Its Fries 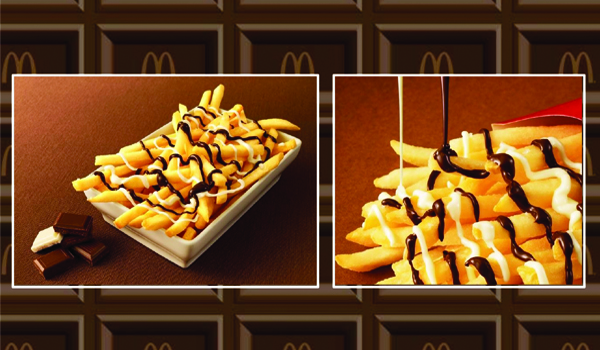 This story was updated to reflect comment from McDonald’s.

McDonald’s is giving its classic French fries a sweet twist.

There is one hitch for fans of the sweet and salty in the U.S.: According to a company press release, the new menu item will be available only in Japan for a limited time starting Jan. 26. When asked whether the chocolate covered fries could make their way to the U.S., a McDonald’s spokesperson told Fortune, “As of now there are no plans.”

Everybody has a sweet and a salty side. Now, with McChoco Potato, you don’t have to choose! https://t.co/HWDu1wx2Iy pic.twitter.com/zw51h7tUz9

The McChoco Potato is one in a handful of new offerings that the fast food chain has already introduced at Japan restaurants this year. It joins the “chicken cheese burger,” which is exactly what it sounds like, and the “cream stew pie,” which is pie dough filled with potatoes, mushrooms, bacon, and onions that looks like a Hot Pocket. Both items launched Jan. 5.

The plan to add chocolate to fries comes as McDonald’s searches for someone to buy a large chuck of shares in its Japanese subsidiary. As Fortune earlier reported, McDonalds’ Japanese branch has been consistently losing money for the past couple of years, particularly after a string of food safety issues.