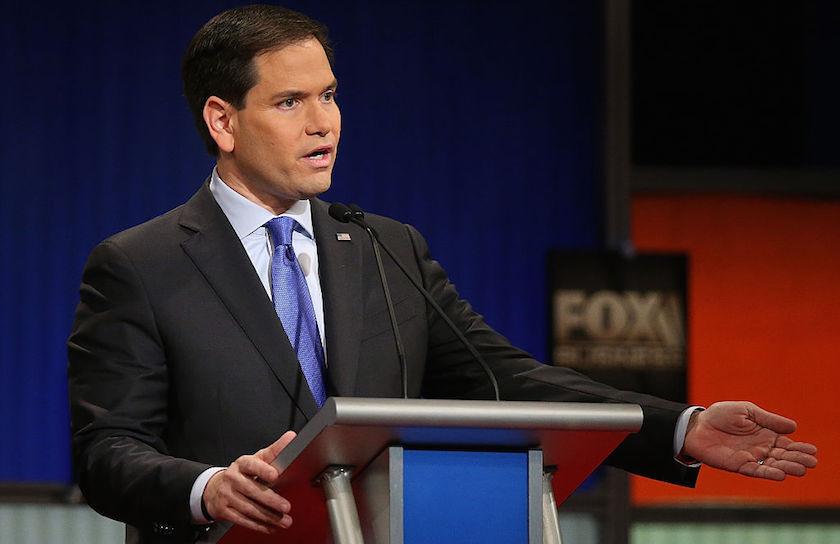 The voters at the town hall in Waverly turned their heads as the self-described atheist stood up with a camera to challenge Marco Rubio about his faith. Justin Scott, a voter from Waterloo, asked the Catholic Republican presidential hopeful how his faith would impact his own belief in the absence of a higher power. The candidate was ready.

“No one’s going to force you to believe in God. But no one’s going to force me to stop talking about God,” Rubio replied on Monday. “No one’s going to take away my right, and your right,” pointing to the crowd, “to live out the teachings of your faith. No one.” At the same event, Rubio highlighted his opposition to abortion, spoke of his commitment to defund Planned Parenthood, and his support for business owners who don’t want to serve same-sex couples’ at their weddings. “You shouldn’t be worried about my faith influencing me,” he continued. “You should hope that my faith influences me.”

The exchange was swiftly posted by the questioner, and then reposted by Rubio’s campaign to the candidate’s YouTube channel. Barely five hours later, the exchange had already made it into Rubio’s stump speech. “America does not make sense unless we believe in a creator,” Rubio told a crowd of about 250 near Iowa City, referencing the question.

For Rubio, the moment couldn’t have been scripted better, providing a window he wanted to highlight his faith as he courts this state’s passionate evangelical Christian voters. In recent months, those voters have consolidated their support behind another freshman senator, Texas’ Ted Cruz, whose own belief and rhetoric more closely aligns with the state’s conservative strain of evangelical Christianity. Cruz’s father is a popular pastor who has traveled the state and the country preaching and boosting his son’s candidacy. Now, two weeks before Iowa caucuses, Rubio is looking to eat into Cruz’s lead, recognizing there may only be room for one senator in the race if the nominating fight is prolonged.

In recent weeks, Rubio has sought to spin his positions in a fashion more appealing to the state’s conservatives, leaning rightward as the moderate lane remains deeply divided. Nowhere has that been clearer than on immigration, with Rubio releasing an ad last week in Iowa declaring he was against “amnesty,” the phrase used by Cruz in criticizing the Gang of Eight legislation Rubio co-authored.

“First of all, let me be clear, I don’t support amnesty,” Rubio said in Johnston, Iowa on Saturday. “Amnesty is the forgiveness of wrongdoing without consequences. There are consequences to violating our immigration laws, and it depends how you did it.”

Earlier Monday, he declined to state whether he still supported a path to citizenship for those in the U.S. illegally. “It’s not a yes or no answer,” he told a questioner in Ottumwa, adding he felt that way because “because there’s no unanimity in America.” He later didn’t rule out a pathway to citizenship to reporters, but said it shouldn’t stop meaningful reform from taking place.