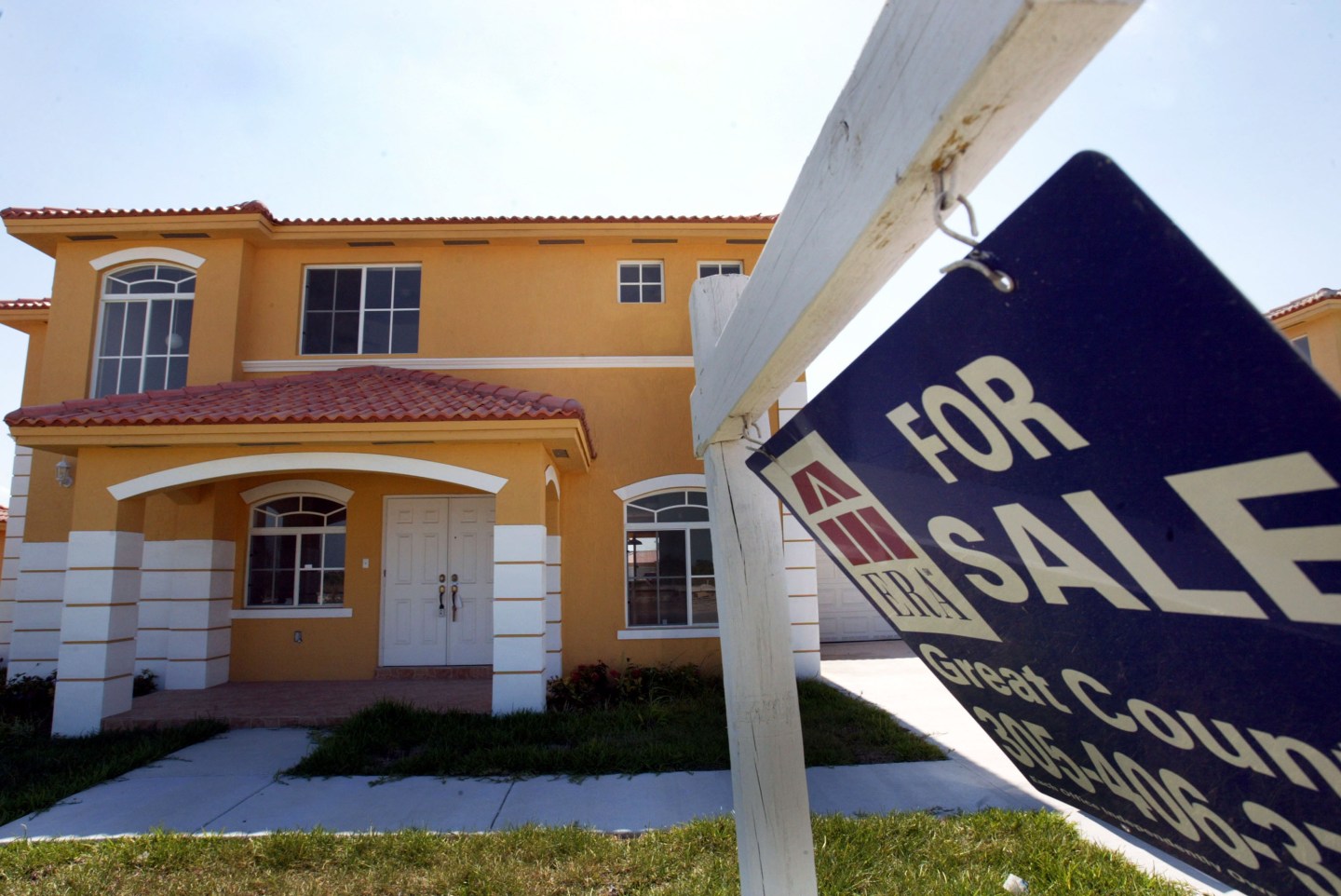 Nearly a decade after the peak of the American real estate bubble, there’s no shortage of fear that we’ll repeat the whole nightmare again.

For years now, economy watchers have fretted over the run up in student loan debt, while more recently the collapse in junk bond prices had analysts drawing paralells to what happened in the subprime mortgage market in 2008. Legendary investor George Soros this week was quoted as saying the upheaval in China’s financial markets reminds him of the “crisis we had in 2008,” The Sunday Times in Sri Lanka reported on Thursday.

But what if the next crisis isn’t just similar to the last one, but a word-for-word rip-off? That’s what a viewer of Quicken Loans’ latest ad for its new mortgage product, Rocket Mortgage, might just think. The tagline is, after all, “push button, get mortgage.”

After seeing that video (or an ad for the product on Fortune.com), you might be forgiven for having flashbacks to the last crisis. Meanwhile, competitors like Guaranteed Mortgage have resorted to hiring celebrities like Extreme Makeover Home Edition host Ty Pennington to pitch its online lending products.

But a hard look at the numbers should convince you that mortgage lenders aren’t handing out loans like a dentist giving out toothbrushes. Lending standards have come down a bit, but they remain tighter than they were before the mid-2000s bubble began inflating, and seemingly qualified buyers are still complaining about getting shut out of the real estate market.

For its part, Quicken Loans President and CMO Jay Farnar argues that products like Rocket Mortgage enable his firms to improve the quality of its lending, because it enables a more efficient collection of consumer data that helps make underwriting more robust.

Meanwhile, mortgage originations have remained flat for the past two years, and lenders are giving out fewer mortgages today then they were in 2012, when the housing recovery was just getting underway, according to data from the Mortgage Bankers Association.

In other words, it doesn’t look like irresponsible mortgage lending is inflating real estate prices beyond their fundamentals, but that doesn’t mean another form of capital won’t. That’s what housing analyst Marc Hanson has been arguing for sometime now. Housing prices, he contends, are about 25% to 60% above what the fundamentals of the U.S. economy can justify, but the market is being propped up by “unorthodox. . .incremental demand using unorthodox capital.”

This time around the unorthodox capital isn’t coming in the form of international investors piling money into the U.S. mortgage bond market, creating a doomsday machine that cranked out home loans with very little scrutiny, but from domestic institutional investors, folks buying second and third homes and serving as landlords, and foreign buyers stowing cash in American real estate.

Hanson makes his case that real estate is dangerously overpriced using simple mortgage math. He argues that the true value of a single-family housing market should be whatever price results from the average homeowner in a market putting 20% down and taking out no more mortgage debt than would result in a maximum debt-to-income ratio of 43%.

He gives the example of the Bay Area, where the average home price is $1.45 million and the average income is $180,000 per year. Given a person’s typical homeowner insurance costs, credit card and car debts, he argues the average person who is simply buying a home for shelter, rather than speculation, can afford just a $778,000 home, nearly 50% below the average priced $1.45 million home.

Hanson argues that it’s impossible to know when home prices will revert to their fundamental values, but that once one pillar of the “unconventional capital,” say institutional investors who aren’t getting the returns they expected, leave the market, other capital will flee with along with it as prices fall.

The counterargument to this sort of analysis is that rent prices are so high across the country, justifying the high prices landlords are paying for single-family homes. “Well, that’s of course, unless, rents are in a bubble too,” writes Hanson. “I believe they are. It’s obvious in major metros. But, look at Phoenix, for example, where over 50% of households can’t afford the average rent on a two-bedroom apartment.”

But the fact that rents are expensive doesn’t necessarily mean that “rents are in a bubble.” In fact, it’s difficult to imagine what, exactly, a “rent bubble” would look like. If rents were really in a bubble, it wouldn’t make sense that household formations were up so much in recent months. There’s no justification for paying bubble prices for rents, since renters can’t gain from asset appreciation. A rational renter would double up with friends and family members and wait for those prices to come down. But instead, Americans have been forming new households of their own, after years in which this behavior was depressed by a weak economy and job market.

A better explanation for high rents is that the homebuilders like DR Horton (DHI) and Pulte (PHM) are facing supply constraints—such as a lack of attractive, buildable land and skilled workers—and are having trouble ramping up production to meet demand. This would explain why house prices are high while actual home-sale volume and new single-family home construction is low.

But anyone who lived through the last bubble has reason to take Hanson’s, and other bubble-watchers, arguments seriously. While the real estate market has returned to normalcy by some measures, like yearly home-price appreciation and relatively high mortgage standards, in other ways it’s behaving very strangely.