Cancer Deaths Are Plummeting to Lowest in Decades 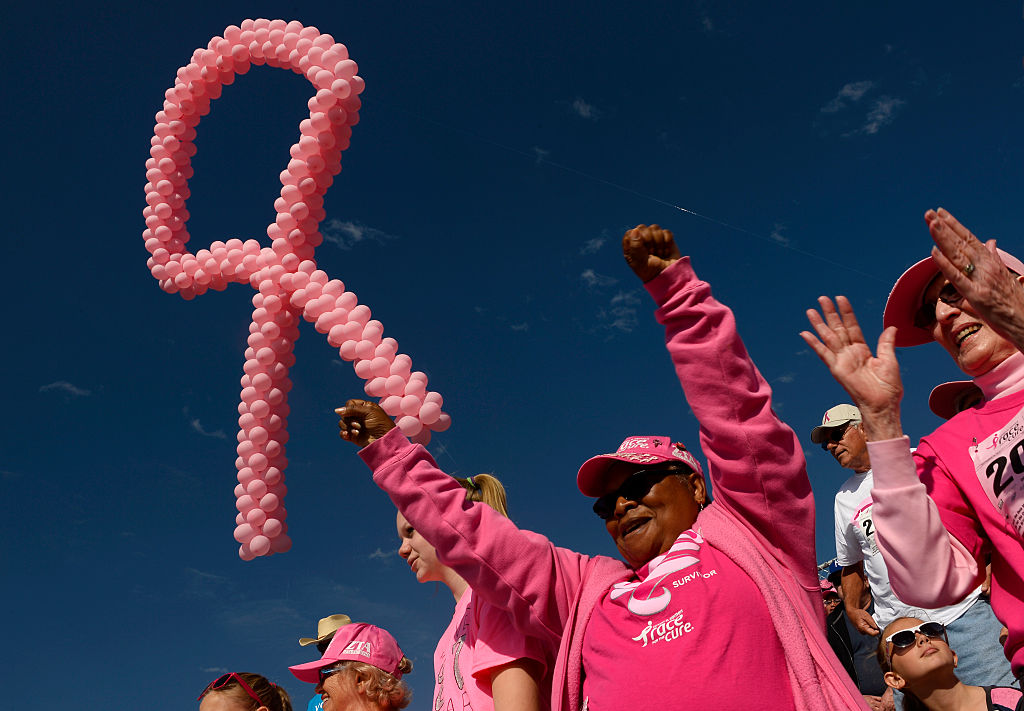 DENVER, CO - SEPTEMBER 28: Sonja Jones, a 34 year breast cancer survivor, raises her hands during the survivors ceremony after the 22nd annual Susan G. Komen Colorado Race for the Cure in Denver, CO on September 28, 2014. Thousands took part in the annual race which started and finished on the Auraria Parkway near the Pepsi Center. Breast cancer remains the most common form of cancer among women living in the United States. In Colorado 1 in 7 women will be diagnosed with breast cancer in their lifetime. Events like Race for the Cure help fund grants to community organizations who provide breast health services to those diagnosed. (Photo By Helen H. Richardson/ The Denver Post)
Photograph by Helen H. Richardson--Denver Post via Getty Images

Cancer deaths hit a multi-decade low after their peak in 1991, largely a credit to lower smoking rates and earlier detection, according to the latest research published by the American Cancer Society.

The significant drop is attributed to a variety of factors, chief among them a decline in smoking rates in the U.S., medical advances that are able to detect cancers earlier, and treatments that better target specific cancers.

The U.S. smoking rate fell to just over 15% of adults in 2015, down dramatically since 1965 when 42% of adults smoked, according to the U.S. Centers for Disease Control. That’s been a significant factor in the reduction of lung cancer-related deaths, which are among the most prevalent, according to the study published in CA: A Cancer Journal for Clinicians.

Better detection has helped reduce deaths due to prostate cancer in men and uterine cancer in women. Uterine cancer rates dropped more than 80% between 2012 and 1930 largely to due the widely used Papanicolaou test for early detection of cervical cancer. While better detection of early-stage and asymptomatic prostate cancer via to prostate-specific antigen (PSA) testing has increased the 5-year relative survival rate of patients to 99% from 83% in the late 1980s.

Better, more targeted cancer treatments have also come on the market in the past several years that have improved survival rates for certain types of cancers. For example, Novartis’ (NVS) chemotherapy drug Gleevec, which was approved by the Food and Drug Administration in 2001, has doubled the survival rate for patients with chronic myeloid leukemia, from 31% in the early 1990s to 63% as of 2011.

While the overall downward trend is good news, an estimated 1.7 million people will still be diagnosed with some form of cancer this year and about 596,000 people are expected to succumb to the disease, based on a complex trend analysis by ACS. Cancer remains the second-leading cause of death among Americans (23%), lagging only slightly behind heart disease (24%). In 21 states, including Florida, Massachusetts, and Arizona, it is the leading cause of death.

“The fact that cancer is nonetheless becoming the top cause of death in many populations is a strong reminder that the fight is not over,” said Otis Brawley, chief medical officer for the American Cancer Society. “Cancer is in fact a group of more than 100 diseases, some amenable to treatment; some stubbornly resistant.”

Lung cancer survival rates have especially lagged behind other cancers, largely due to late diagnosis. The 5-year survival rate when lung cancer is diagnosed late drops to 4% from 18% for all lung cancers. In 2016, a majority (27%) of all cancer deaths will be due to lung and bronchus cancers.

Also, not all cancer types have seen the same degree of decline in diagnosis and deaths of the past several years. Diagnosis and death rates due to liver and pancreatic cancers–two of the most fatal cancers–have both been on the rise since 2003.