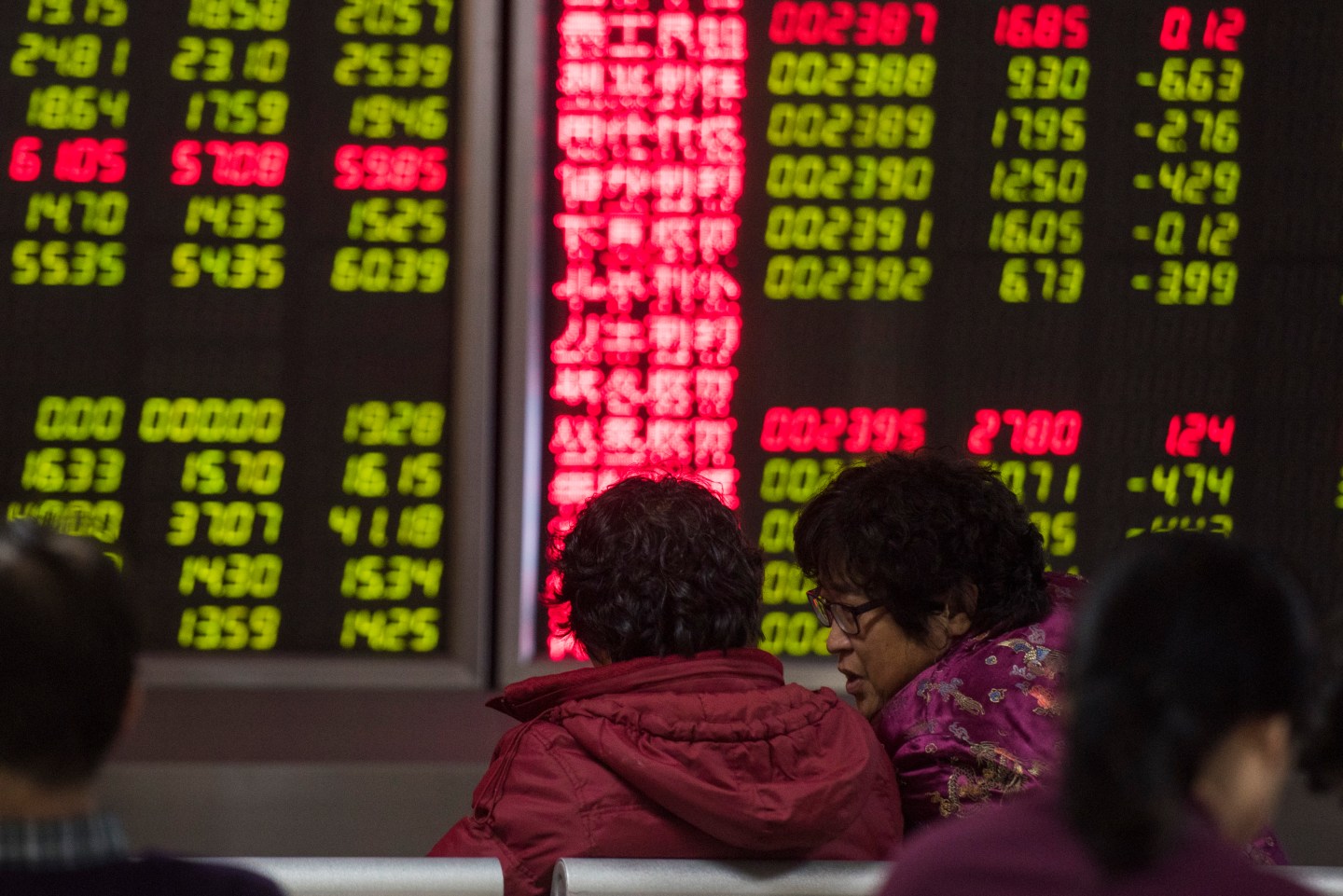 For the second time this week, ‘circuit-breakers’ halted trading in China’s stock market. This time, the stock market was open for all of 29 minutes before the blue-chip CSI 300 index fell by 7% and the circuit breakers ended the trading day.

Stocks crashed after China’s central bank lowered the yuan’s so-called reference rate, its trading peg to the U.S. dollar, by the largest margin since August, when the yuan dropped a couple percentage points over two days. That created a fear that China’s leaders are using a weaker currency to spark growth for an economy that is struggling more than expected.

“I think this time there are many drivers for the crash in the market,” says Liu Jing, professor of Accounting and Finance at Cheung Kong Graduate School of Business in Beijing, including the yuan’s continued slide, the uncertainty in North Korea and the circuit-breakers that induce panic as traders rush to sell before a daily 7% limit closes the market.

Liu also pointed to government reforms announced last week that will allow almost any Chinese company to list publicly starting in March. The reforms could flood the market with listings and reduce the premium valuations Chinese companies listed in China enjoy compared to their U.S.-listed counterparts. “That’s a huge change,” Liu says. “Surprisingly, in the beginning the market didn’t react to it. I think it’s reacting to it now.”

Chinese traders might be getting used to the chaotic moves. Zhang Qinli, a graduate student in Beijing, bought stock during Monday’s crash and held on through Thursday’s decline. He was down 50,000 yuan on the trade but still optimistic even as he complained about the market’s immaturity. “The Chinese stock market is like a joke itself,” he said, but added that he thought “these swings won’t develop into a disaster like last year.”

There didn’t seem to be panic amongst regular people on Thursday—or much attention paid to the stock market at all. Official state media didn’t cover today’s crash prominently and the number of individual investors trading in China has dramatically declined after the summer’s fall.

However, social media were alive with commentary on the subject, much of it gallows humor.

Beginning this weekend, large shareholders—those owning 5% or more of a company— will only be allowed to sell 1% of their shares over the next three months. If they want to sell, they also have to tell the regulator 15 trading days in advance.

The new restrictions were telegraphed yesterday. Lost amid the North Korea nuclear test news yesterday was China’s admission that it is reneging on its promise to unlock a six-month ban on large shareholders’ sales that was instituted during the summer stock market meltdown. Regulators said today they would uphold the ban until the new rules take effect.

If the move seems drastic, they should be taken in context. China’s government spent around $250 billion propping up the stock market this summer amid a selloff driven by overleveraged traders taking off their bets and running. At the time it banned short-selling, allowed 1,400 companies to stop trading, suspended new IPOs, and told banks to fund more share buybacks.

The selling ban is “going back to the old way of doing things,” says Professor Liu, who nonetheless believes that because stock valuations dropped during this summer’s crash, when Shanghai’s index fell to 3,000 from over 5,000, there will be less government intervention this time.

“Because this is China, they still play from roughly the same rulebook—when the market falls, they’ll do something about it. But this time they’ll do less,” Liu says.

News outlets reported Thursday that the securities regulator called an unscheduled meeting after the day’s ugly start. The circuit-breakers were expected to be the focus. Instead of mitigating selling pressure, analysts say they have been making it worse. The breakers trip after a 5% decline. After a 15-minute wait, trading resumes but halts for the day if losses reach 7%. What’s happened is that traders have sold after the 15-minute calming period to get ahead of other sellers before a 7% decline is recorded.

As shown in this chart, China’s stock market has very little relation to the greater economy, so there’s good reason to track other economic indicators to measure China’s economy. One of which is the currency. If the yuan’s slide—it is down almost 2% this year to the U.S. dollar—is an indication, it is not a good start to the year for China’s economy.