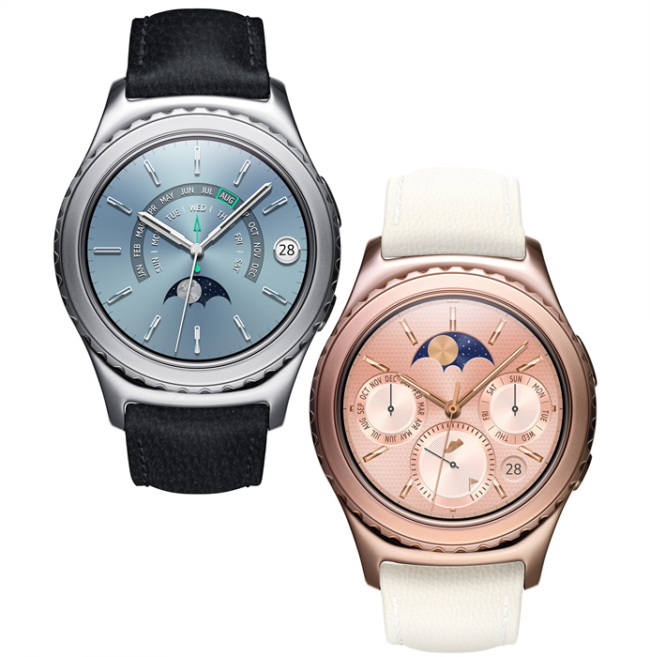 Samsung’s strategy for achieving domination with its smartwatches: options. All kinds of options.

The Korean tech giant unveiled plans on Tuesday at the Consumer Electronics Show in Las Vegas to offer customers more choices for smartwatches. They are designed to build on the company’s strength in the nascent smartwatch market against a long list of rivals including Apple, LG, and Motorola.

Samsung said that its Gear S2 Classic watch will now be available in two new finishes: 18-karat Rose Gold with an ivory-colored leather band, and Platinum with a black leather band. The extra palette of colors expands beyond the original Classic version that comes in black, and the Gear S2 that comes in black and white.

For even more aesthetic options, Samsung said it’s adding not only new band options, but also new watch faces that will feature artwork from artists like Keith Haring, Jean-Michael Basquiat, Jeremyville, and Burton Morris. Until now, it only had half a dozen of fairly basic face designs.

It’s also adding more apps, the company said, and that the upcoming models will be equipped with near-field communication technology, the underlying tech for its mobile payment technology, Samsung Pay. Gear S2 users will be able to use Samsung Pay, which involves paying at stores by waving a watch in front of a reader, “early this year,” starting in the U.S., Samsung said.

WATCH: For more on this year’s CES convention in Las Vegas, watch this Fortune video:

But perhaps Samsung’s boldest move to becoming a bigger smartwatch maker: compatibility with the iPhone, which it says will come later this year. The Gear S2 watches will be able to connect online through a Bluetooth signal from the phone so users can manage their settings instead of having to use an Android phone to do that. It likely won’t have all the features it would with a Samsung or other Android phone, however, such as Samsung Pay.

Meanwhile, the Apple Watch continues to function only with iOS devices.