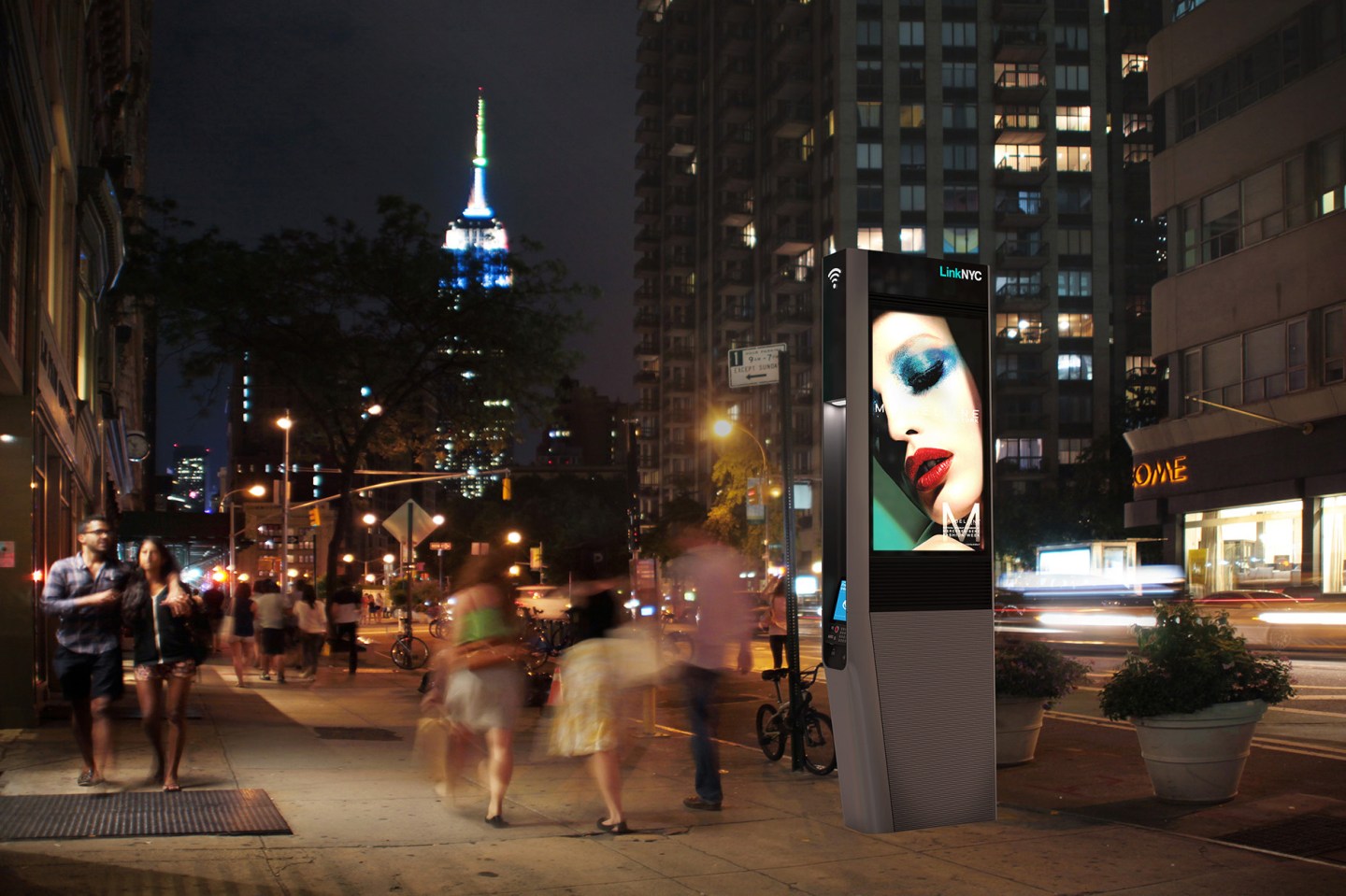 Each LinkNYC kiosk will be equipped with an Android tablet for making free U.S. phone calls, plus USB ports to charge phones.
LinkNYC

New York City is building a public, free Wi-Fi network that will eventually blanket all five boroughs with as many as 7,500 Internet-providing kiosks called Links.

Both Link kiosks will take the place of former payphone booths on Third Avenue. One is at the corner of 15th Street and the other is two blocks north at 17th. Each location is equipped with a nearly 10-foot-tall monolith, equipped with USB ports for charging phones, a built-in touchscreen tablet running Android for making video calls, and two large screens for displaying advertisements.

Each Link will also put out a strong 400-foot Wi-Fi signal with a top speed of 1 Gbps, depending on network congestion.

The municipal New York project is actually getting a big boost from Silicon Valley. Alphabet (GOOG), Google’s parent company, is an investor in Intersection, the company administering and maintaining the LinkNYC project,

When New York decided to build the Link network, it contracted with a group of four companies: Qualcomm(QCOM); the chip designer Comark, which builds the physical kiosks; Titan, a display advertising firm; and Control Group, which was the company leading the strategy for the effort. In June, Google’s Sidewalk Labs subsidiary was a investor in the move that resulted in Titan and Control Group merging to become Intersection.

It’s a curious moonshot for Google, but Intersection does expect to generate revenue. According to New York Mayor Bill de Blasio, the city isn’t contributing a taxpayer cent to the construction and operation of Links. Instead, Intersection plans to generate about $500 million over the next 12 years from Links, primarily from digital mini-billboards placed on both sides of a Link kiosk. The ads can be changed remotely or sold programmatically, which is a huge improvement from the static pay phone ad units that Links are replacing.

Another way to look at it is that Google is now experimenting with the outdoor physical ad market through its purchase of Titan and its administration of the LinkNYC project.

For New Yorkers eager to get free Wi-Fi on their block, it might be a little bit of a wait. Many of LinkNYC’s goals have long-term horizons and it will take as many as eight years for Intersection to reach its 7,500 kiosk target. But the project has momentum, and according to government documents, the city will build at least 500 kiosks over the next 15 months.