These Airlines Have the Healthiest Foods 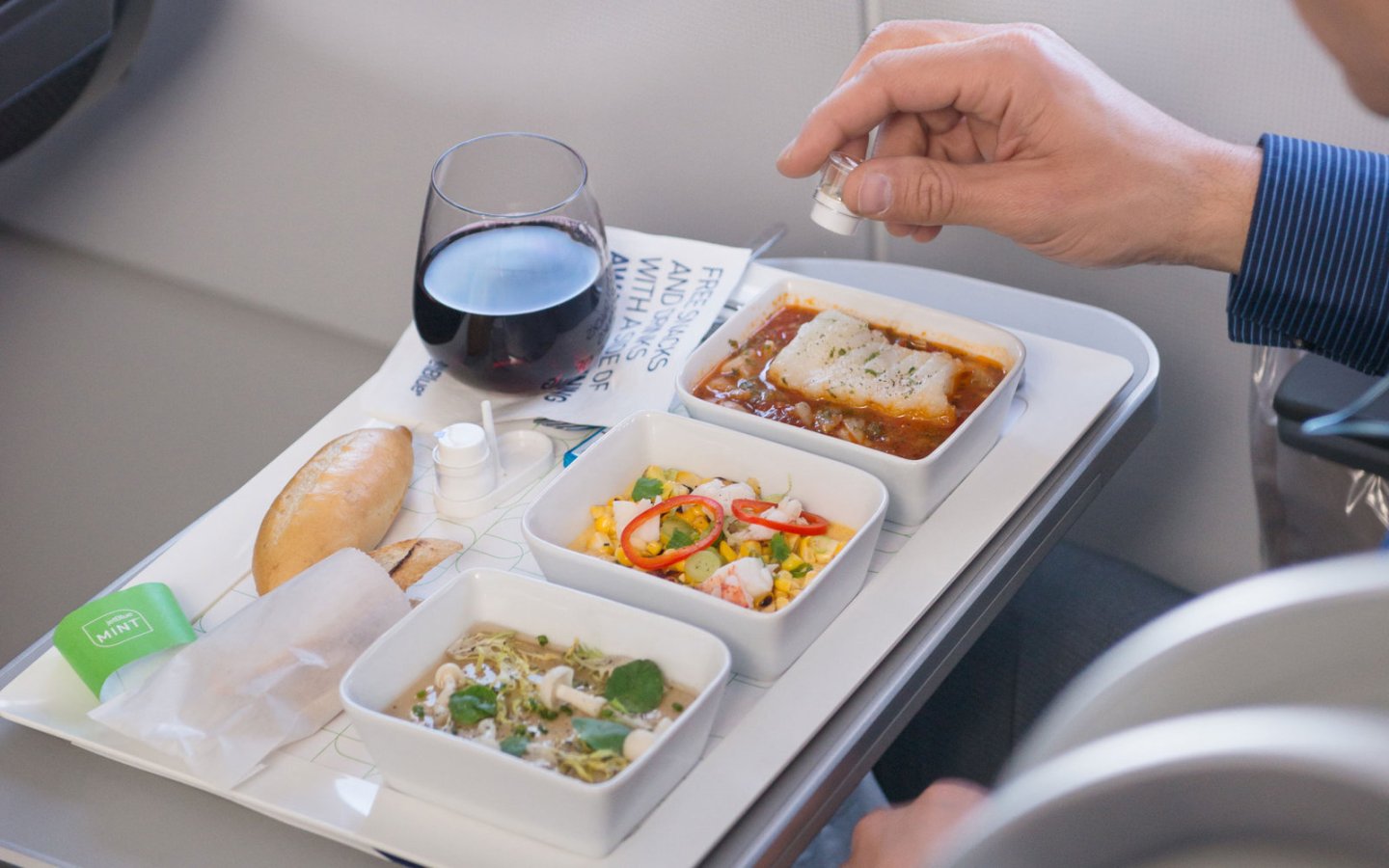 Since 2012, Dr. Charles Platkin, editor of DietDetective.com and a professor of public health at Hunter College and CUNY, has been investigating in-flight snacks and meals found on major carriers across the U.S. and Canada.

This year’s survey revealed which airlines are improving, becoming less cooperative, and which ones continue to fly the healthiest food across the skies. The 2015 report also highlighted a concerning trend: after four years of investigating in-flight nutrition, average number of calories per item have risen from 360 to a whopping 400. Meanwhile, the number of choices continues to decrease.

In addition to calling out the best meals, snack boxes, and treats, Dr. Platkin gave airlines average calorie counts, and overview of food offering, exercise equivalents (one 350 calorie peanut butter-and-jelly half sandwich from Virgin America equals 76 minutes of walking). The final ranking, one star for the worst airline (lowest health rating and least cooperative in terms of providing information) and four and a half stars for the best.

Want to know the healthiest airline in the skies—and what you should order? Read on.

It doesn’t realize this airline (SAVE), which scored so poorly on our World’s Best survey for In-flight Service, received a “terrible” rating for its failure to cooperate and its unhealthy snacks. The chicken Cup Noodles received a surprising thumbs-up as your best bet—but not as a snack. Make this your meal and then go for an hour long walk around town after you disembark.

By handing over snack nutrition information, Hawaiian gained an extra quarter star over Frontier; unfortunately, their in-flight food (treats, snack boxes, and meals) didn’t perform well when analyzed by a nutritionist. Average meal calories were more than 950, while snack boxes had a whopping 417. The moral of the story? Pack your own meal, or pick the healthful options out of the Gluten-Free snack box (roasted chickpea snacks, 90 calories, and hummus, 67 calories).

Unfortunately, Allegiant Air’s (ALGT) in-flight snack offerings have taken a turn for the high-calorie and high-sodium, whereas in 2014, they at least had a fruit and cheese plate diners could opt for. None of the options onboard this regional carrier impressed the dieticians, except for nuts (which, as we all know, need to be consumed in moderation). And DietDetective.com warned that travelers should not let their children near the Wingz Kids Snack Pack, which is loaded up with sugary jelly candies and peanut butter cracker sandwiches, among others.

Southwest (LUV) failed to provide nutritional information for the review—a major knock to the total score. Though the airline also provides little in terms of variety or nutritional value. If you need to snack in-flight (and you didn’t bring your own) opt for the dry-roasted peanuts: 70 calories. Fortunately, they’re free of charge.

Alaska Airlines (ALK), a favorite with domestic travelers, used to be eager to participate in the annual study. But this year, the airline opted out of providing info—and in-flight food calorie averages have soared from 444 to 537. The healthiest choice is the Mediterranean Tapas Picnic Pack, which is vegan and gluten-free: it contains olives, hummus almonds, and apricots, though it clocks in at 497 total calories. You’ll want to order that for breakfast, lunch, or dinner: not a snack to tide you over.

America’s largest carrier (AAL) has stepped-up its health food game this year, offering snacks with significantly lower calories than in years past.  Snacking is best limited to the hummus and chips (gluten-free, 147 calories) and for meals, the Chicken Cobb Salad is significantly healthier than its neighbors on the “Fresh and Light” menu. Even with the creamy ranch dressing and blue cheese crumbles, the salad has only 310 calories.

DietDetective.com noticed that while the snacks and snack boxes are becoming increasingly less healthful, the meals are improving on this domestic carrier (UAL). Breakfast, in particular, is king. Order the Fresh Start Breakfast Selection, which offers fresh fruit, cheese, and zucchini bread for only 205 calories, or the organic steel-cut oatmeal, topped with cranberries, brown sugar, and butter. Skip the toppings if you can, but at only 340 calories, this will definitely help keep you full for the duration of the flight.

Canada’s flag carrier (okay, not a domestic carrier but close, right?) was extremely cooperative with DietDetective.com. Calorie counts for meals are low, though nutrients are still lacking. Believe it or not, the nutritionists recommended the sushi, which is only available on flights 4 hours or longer departing from Montreal, Toronto, and Vancouver. The combo of California, Spicy California, and Vegetable Salad Sushi Rolls are packed with good-for-you ingredients and have a satisfying 450 total calories. Other smart options include the Chicken Club Wrap (roasted chicken, turkey bacon, tomatoes) and the fat-free Greek yogurt with strawberry and granola.

JetBlue (JBLU) has always performed well on this survey, though it got a hat tip for posting nutritional information for its meals online this year. Travelers flying on planes with Eat Up Café on offer should stick to yogurt with granola, the veggie platter, or the Kale and Quinoa Salad: 320 calories of protein-rich cannellini beans, filling quinoa, grape tomatoes, and kale and spring greens. While the snacks are not terrible (omega-3 mixed nuts, beef jerky) the free ones are—go figure—the least nutritious of the options. And just because they’re free doesn’t mean you should eat as many as you can stuff in your carry-on.

Thanks, in part, to a partnership with healthful Luvo, Delta (DAL) consistently offers calorie information for the brand’s snacks. Peanuts (free and full of protein) are your best choice for in-flight snacking. Breakfast looks good on almost all flights: especially if you skip the muffin. Continental breakfast plates have Greek yogurt, granola, and seedless grapes, while the Luvo Fresh Breakfast Medley (transcontinental flights) comes with a hardboiled egg, chia ricotta, Fuji apple slices, and strawberries. There is also the organic chocolate and the multi-seed mini muffins, which you’re still better off without.

Calories are dropping across the board, by more than 15 percent, helping the San Francisco-based airline (VA) snag the top spot this year. In terms of snacks, the airline still got knocked for offering nothing particularly healthful (turkey jerky isn’t terrible, and the seasoned nuts are fine as long as you don’t binge on the whole 450-calorie package). A vegetable wrap with curried white bean hummus, arugula, carrots, tomatoes, and a side of fruit salad, as well as soba noodles with ginger chicken, bell peppers, carrots, shiitake mushrooms, and soy beans were high scorers, thanks to a cool calorie to protein ratio.