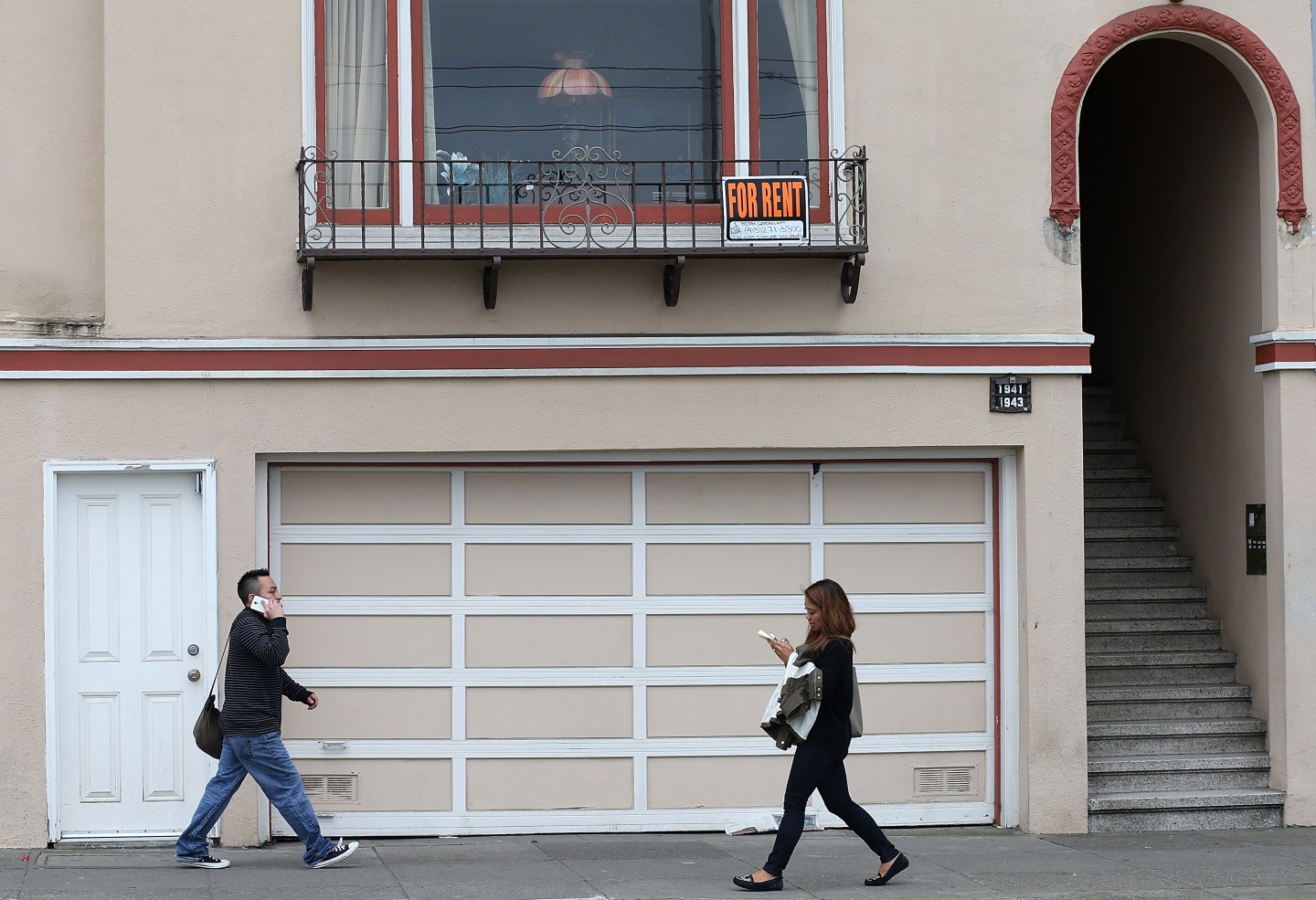 SAN FRANCISCO, CA - APRIL 21: Pedestrians walk by an apartment for rent on April 21, 2015 in San Francisco, California. According to a report by Forbes magazine, San Francisco, Oakland and San Jose top the list of worst places in the nation for renters. Bay Area renters are faced with extremely low vacancy rates that have prompted high rents that average over $3,100 for a one bedroom in San Francisco. (Photo by Justin Sullivan/Getty Images)
Photograph by Justin Sullivan—Getty Images

It’s news to no one that real estate prices in places like New York and San Francisco are insane. But earlier this month, the finance site SmartAsset has cross-referenced income and housing market data to find what that really looks like for young people in various locales— and for many, the results are grim.

A millennial with a median income in San Francisco ($47,426) can afford to buy a 135 square foot home (if such a home existed). That’s smaller than the 9 ft. x 18 ft. dimensions of what many city codes consider a “full size” parking space.

In cities where millennials earn lower incomes—often, much lower—the housing picture is stunningly different. The real standout is Memphis, a decent enough place to live despite a crummy $31,113 median income for millennials. But that income is enough to swing an expansive 2,848 square foot pad. The only city on SmartAsset’s list with better square footage numbers is Detroit, where they’ve got some housing to spare.

WATCH: For more on millennials and housing.

It’s a divide that would have been hard to see coming 20 years ago, when suburban McMansions were all the rage, and some foresaw the Internet allowing people to live farther away from major economic centers. Instead, the last 15 years has seen urban centers growing faster than the rest of the country. That, plus the major hit young people’s incomes took after the financial crisis, has helped push homeownership rates for those under 35 to all-time lows.

Would creating actual 135 square foot homes help reverse that? Some urban planners think it’s worth considering. The SCADpad concept, for example, is exactly 135 square feet, and was actually conceived as a way of turning underused parking garages into housing. The rise of driverless cars might actually free up enough parking spaces to make that approach viable.

In the meantime, a growing number of Bay Area workers are exploring a low-tech stopgap—living in vans and RVs turned into rolling micro-apartments.

But most microhousing is substantially larger than a parking space – it’s generally defined as anything under 350 square feet. Microhousing developments are emerging across the country, as developers begin to adapt to (or capitalize on) the pressures that SmartAsset’s analysis captures. Many of these units are rented, and even subsidized by cities looking to create affordable housing. But many of those that are for sale at market rates would still be out of reach for average earners.

Of course, things could be much, much worse – in Hong Kong, more than 100,000 people live in “cubicle apartments” that cram kitchens and beds into as little as 40 square feet.