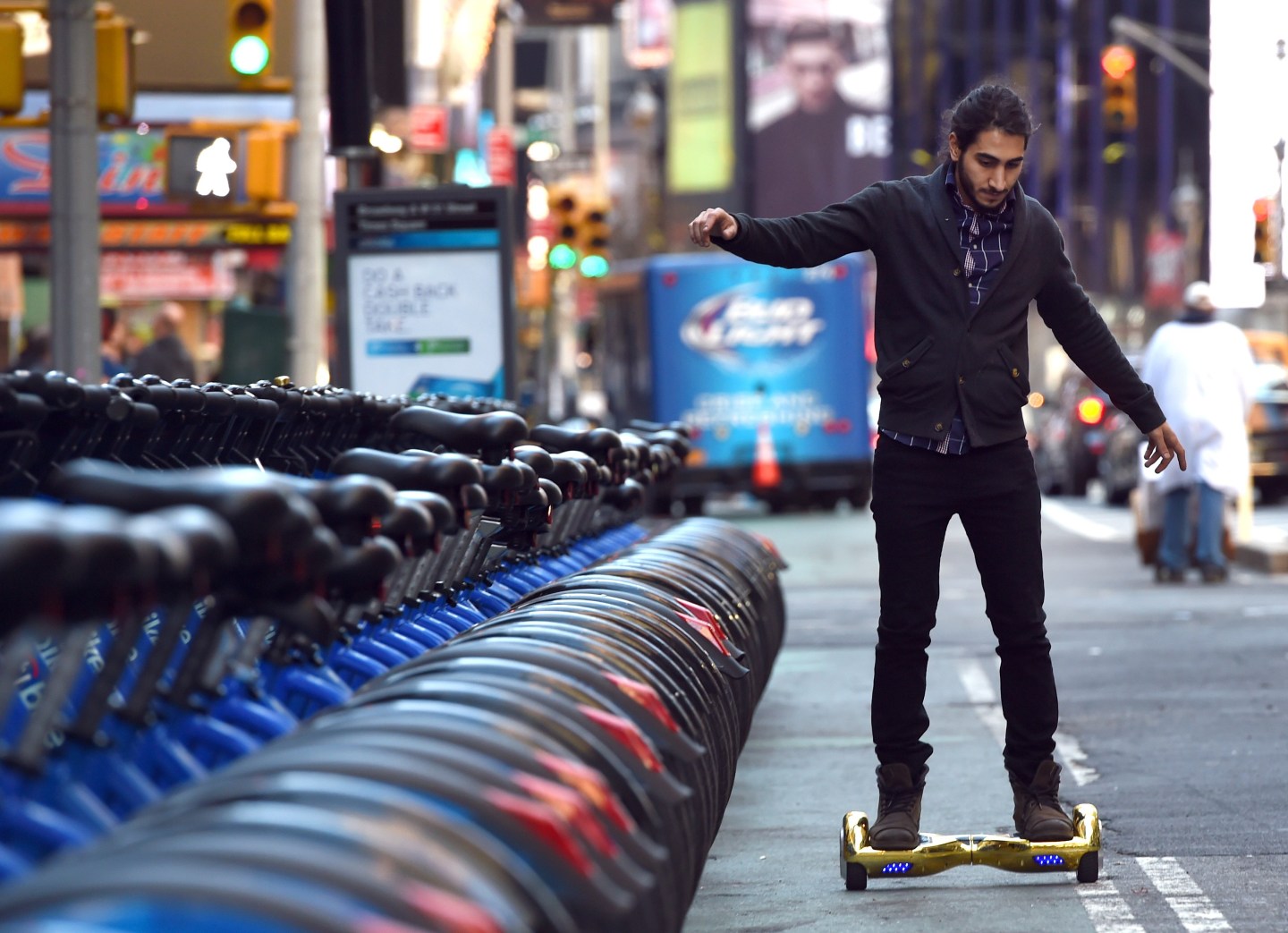 Whizboard Store manager 'Mor Loud' demonstrates the Hoverboard on Broadway in Times Square December 15, 2015. The hot item on many holiday lists will help you zip around town, the shopping mall and from one end of the workplace to another.These so-called "hoverboards" or self-balancing electric scooters, are surging in popularity in the first season where they have been available at relatively affordable prices -- as low as $300 for some models. AFP PHOTO / TIMOTHY A. CLARY / AFP / TIMOTHY A. CLARY (Photo credit should read TIMOTHY A. CLARY/AFP/Getty Images)
Photograph by Timothy A. Clary — AFP via Getty Images

They’re not allowed on any major airline and are largely considered a substantial fire hazard, but you may still be able to ride your hoverboard down New York City streets in the near future.

The self-balancing scooter is currently illegal to ride in N.Y.C., with police officials saying state law prohibits the devices. But a state senator is leading the charge to amend that law by letting cities decide for themselves whether to allow hoverboards and what protective gear to require.

State Sen. Jose Peralta, along with Assemblyman David Weprin and Councilman Andy King, held a news conference at New York’s City Hall Tuesday to announce the measure, saying the laws, which classify the devices as motor vehicles, were inaccurate. Hoverboards, they maintain, are essentially fast skateboards.

“This is a bill that tries to keep up with technology,” said Peralta. “Because hoverboards and electric unicycles are not cars or motorbikes, my proposal removes these devices from what is considered a ‘motor vehicle’ under state law.”

New York City police, though, haven’t exactly warmed to the idea of people riding the devices up and down city sidewalks, saying they could create problems for the rest of the population.

WATCH: For more about hoverboards, watch this Fortune video:

“To be quite frank with you, I think anybody who rides these things is out of their minds,” said NYPD Commissioner Bill Bratton at a separate, unrelated event. “We live in an extraordinarily crowded city; you have a hard enough time walking down the streets, let alone hovering.”

Hoverboards were one of the hottest gift items of the holiday season—but they’ve become the target of a lot of unwanted scrutiny and legal action due to their tendency to catch fire. The Consumer Product Safety Commission is investigating the devices, and a New York man is has filed a suit seeking class action status against hoverboard maker Swagway after the device allegedly led to a fire in his home while being recharged. Yesterday, a Texas mall removed all of the devices from its stores after a fire caused by a hoverboard led to the mall being evacuated.

New York isn’t the only place that has banned the popular gadgets on public streets. Earlier this year, the U.K.’s Crown Prosecution Service announced that hoverboards were illegal to operate on main roads and sidewalks. And, in California, a new law will go into effect next year that requires hoverboard users to wear helmets and limit speeds to 35 mph. That same law will prohibit anyone under 16 from riding the devices.