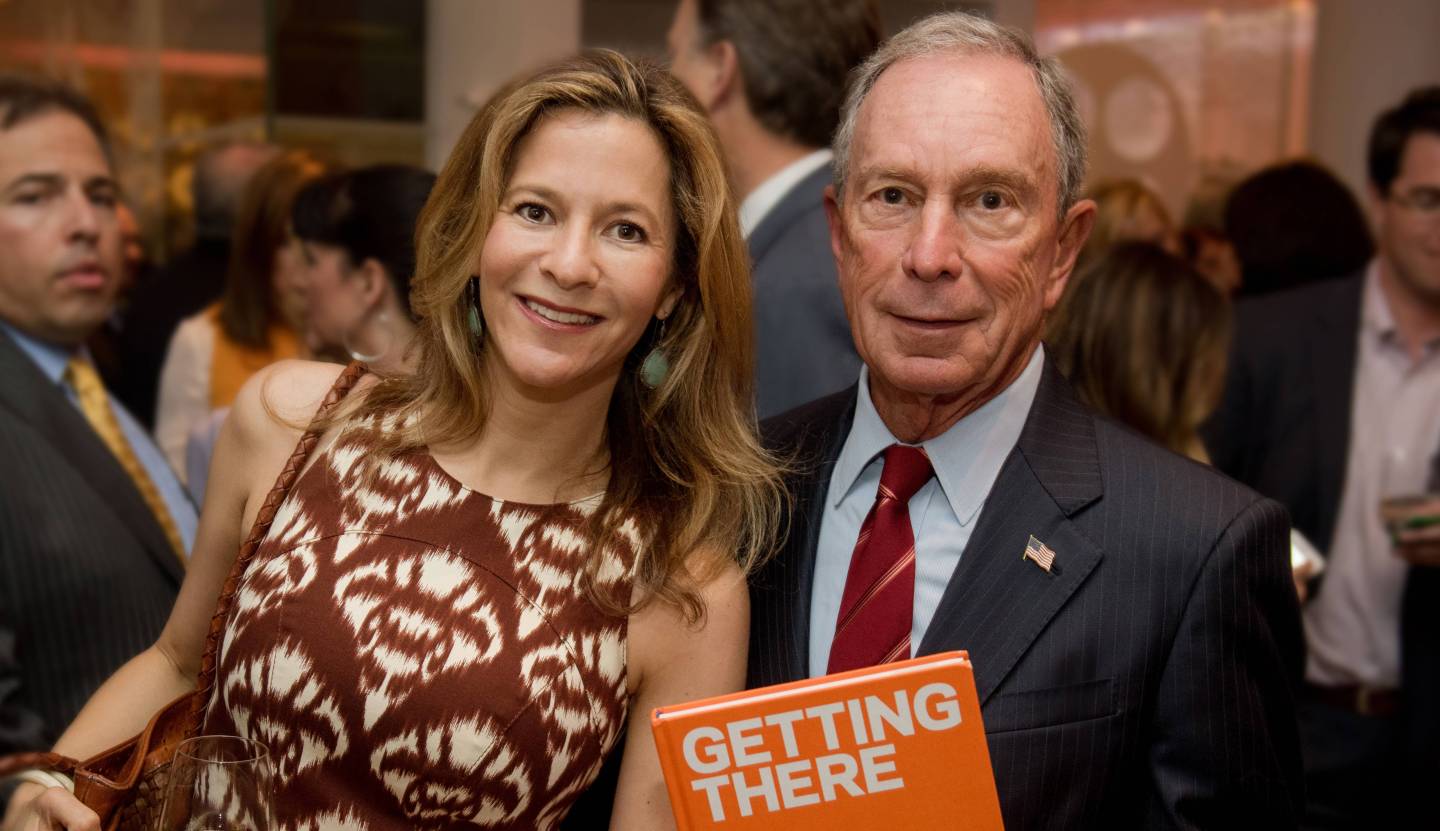 For my new book, Getting There: A Book of Mentors, I spent 5 years interviewing some of the most successful people alive (Warren Buffett, Michael Bloomberg, Anderson Cooper, Sara Blakely, Jeff Koons, Kathy Ireland, Les Moonves, to name a few). Here are the 7 things they all have in common:

1) They understand their “circle of competence”

In his Getting There essay, legendary investor Warren Buffett explains that it’s essential to understand your strengths and weaknesses. He relays that when deciding what to pursue, knowing what to leave out is as important as knowing what to focus on and quotes Tom Watson (the founder of IBM) (IBM) who said, “I’m no genius but I’m smart in spots and I stay around those spots.”

Buffett explains, “My brain is not a general-purpose brain that works marvelously in all situations. There are all sorts of things that I’m no good at and there are all kinds of investment opportunities I’m not able to comprehend. I understand some kinds of simple businesses. I can’t understand complicated ones. Coca-Cola (KO), for example, isn’t very complicated. It’s a durable product and the appeal is universal. I try to find businesses I can grasp, where I like the people running them and think the price makes sense in relation to the future economics.”

John Paul DeJoria, billionaire co-founder of the Patrón Spirits Company and John Paul Mitchell Systems, advises, “Do what you do best and try to find others who can fill in by doing the things you are not good at. For instance, I am terrible at details—accounting especially, so I hire accountants to help me. This frees me up to focus on the things I do excel at and I can run a more efficient operation.”

None of my Getting There subjects are good at everything, but they all became incredibly successful by honing in on what they excel at.

2) They harness their passions

You’ve probably heard this before—and for good reason! The path to success is almost guaranteed to be arduous, but if you love what you do you’ll thrive on the inevitable challenges and have the stamina to achieve your potential. My Getting There subjects express that if you pursue something just for the money or because you “think you should”—it probably won’t end well.

World famous scientist J. Craig Venter (a.k.a. the first person to sequence the human genome) says, “So many people get pushed along in the “system,” and because they don’t really know what they want to do, they practically let their careers be chosen for them. If you’re not passionate about what you’re doing, it’s hard to be successful at it. You can show up and do what’s required, and you can even do your job well, but that’s not where real success is going to come from. Success comes from doing something extraordinary with passion and intensity.”

World famous composer Hans Zimmer joked in his Getting There essay, “Whenever I need legal or medical advice I go announce my problems to my orchestra… Half are doctors and half are lawyers whose parents forced them into those jobs!”

3) Their career paths are fluid

My Getting There subjects demonstrate that you don’t need to have your career all mapped out, what’s essential is to always keep your eyes open for new opportunities and be open to change.

▪ Craigslist founder Craig Newmark stumbled upon his businesses while trying to pursue a social goal.

▪ Michael Bloomberg only decided to start his own company, Bloomberg LP, after being fired from his job at Salomon Brothers.

▪ Jillian Michaels, who runs a health and wellness empire, dedicated herself to that field after being fired as a talent agent.

▪ Les Moonves, the President and CEO of CBS (CBS), originally pursued acting, but eventually realized he would be happier on the other side of the camera.

Moonves elaborates, “Things sometimes come at you and hit you in the face. If your path is rigid, you’ll likely miss out on opportunities… I shifted from acting to producing theater and realized it felt great. Before long, I shifted again and got my first job in TV as a development executive at Columbia Pictures Television.”

4) They create their own opportunities

None of my Getting There subjects waited around for someone to recognize a talent in them and offer them a break. It would be awesome if the world worked that way, but unfortunately it rarely does. If you want something, you have to figure out a way to make it happen.

Anderson Cooper wanted to be a foreign news correspondent but couldn’t even get an entry-level job at any of the major networks. He ended up working as a fact checker for Channel One, an agency that produces news programs for high schools.

Cooper quickly realized that when you are at a job people tend to pigeonhole you in whatever role you are in—and sometimes you have to do something drastic in order to change people’s perception of you. So he quit his job, borrowed a friend’s video camera, and went overseas to shoot stories by himself. Living on a mere five dollars a day, Cooper made his videos as interesting and dangerous as possible, then offered them to Channel One for such a low price that they couldn’t refuse. This bold move is what launched his career and enabled him to live his dream.

Cooper explains, “Had I asked the producers at Channel One if they would be supportive of my going out to make war videos, they would probably have said no. It’s easier to say no than it is to say yes, and they might not have wanted to feel responsible for me in any way. So I just did it. I rarely ask people for advice or permission when I’m planning on doing something I feel strongly about. That only opens the plan up to be crapped on.”

My Getting There subject don’t blindly follow others. They think on their own and understand that just because something has been done one way for years doesn’t mean that it’s the best way, or that another way won’t work.

In the mid 1970’s Gary Hirshberg noticed that we were changing the way food was made, for the worse. (We were injecting our animals with hormones and antibiotics, spraying our fields and produce with toxic pesticides, and using chemical fertilizers, all with no real knowledge of what would happen to kids who grew up on a diet containing these things.)

Hirshberg started promoting organic food before most people knew what the word meant. He soon co-founded the organic yogurt company, Stonyfield Farms. He recalls, “When I tried to get retailers to carry Stonyfield yogurt, which was a little more expensive than the nonorganic brands, they’d say, ‘Does Organic mean it has dirt in it?’ It was difficult to get stores to carry our products.”

It took Stonyfield 9 years to make it’s first nickel, but it is now the largest organic yogurt company in the world—and every large manufacturer in the food space has an organic product line.

Hirshberg says, “Challenging conventional wisdom can be scary, but most major changes happen because someone asked: ‘Why not do it differently?’ If you don’t ask, you don’t get.”

6) They don’t let fear of failure deter them

My Getting There subjects know that trying new things is essential for growth and if you don’t take risks you will never get anywhere. As a result, they view falling down as just part of the process. As super-model-turned-entrepreneurial-mogul Kathy Ireland succinctly puts it, “If you never fail, it means you are not trying hard enough.”

Ireland failed for years at various start-ups (a microbrewery, a skin-care line, and several art projects), before finally launching her own brand, Kathy Ireland Worldwide. It is now a $2 billion enterprise with its name on more than 15,000 products.

Fitness expert Jillian Michaels elaborates, “No one likes to feel vulnerable, but the reality is that you can only know as much depth, happiness, and success in your life as you can know vulnerability. If you don’t ask out a girl or a guy on a date, you won’t get rejected, but you won’t fall in love either. If you don’t apply for the job, then you won’t get the position you want. If you don’t try to start your own business, then you’ll never be the entrepreneur you always dreamed of being.”

Every single one of my Getting There subjects have failed, numerous times—but they found success because they were able to stand back up and try again, or learn from their mistakes and try something new. The point is, they forced themselves to keep moving forward.

▪ Author Jeff Kinney spent eight years writing his first Diary of a Wimpy Kid book only to have it rejected by multiple publishers. Abrams finally gave him a chance and there are now over 115 million Wimpy Kid books in print (not to mention the movies).

▪ John Paul DeJoria was fired from three jobs and lived in his car on two dollars and fifty cents a day. He went on to found John Paul Mitchell Systems and the Patrón Spirits Company.

▪ After establishing his own architectural practice, Frank Gehry found himself on the verge of bankruptcy several times before reaching solid ground.

▪ Matthew Weiner shopped his TV show around Hollywood, but it was rejected all over town. Mad Men finally made it to the screen seven years after it was written.

My Getting There subjects are where they are today because, even after getting whacked multiple times, they found a way to lick their wounds then pop back up with a smile. This is what you must do in this world…so the next time you get a whack, recall a specific story that inspires you (Getting There is chock full of them!) then figure out a way to pop yourself out of whatever hole you happen to be in.

Getting There: A Book of Mentors is filled with inspiring anecdotes, actionable career advice, and wisdom applicable to life in general.

Gillian Zoe Segal is the author of “Getting There: A Book of Mentors” and “New York Characters.”