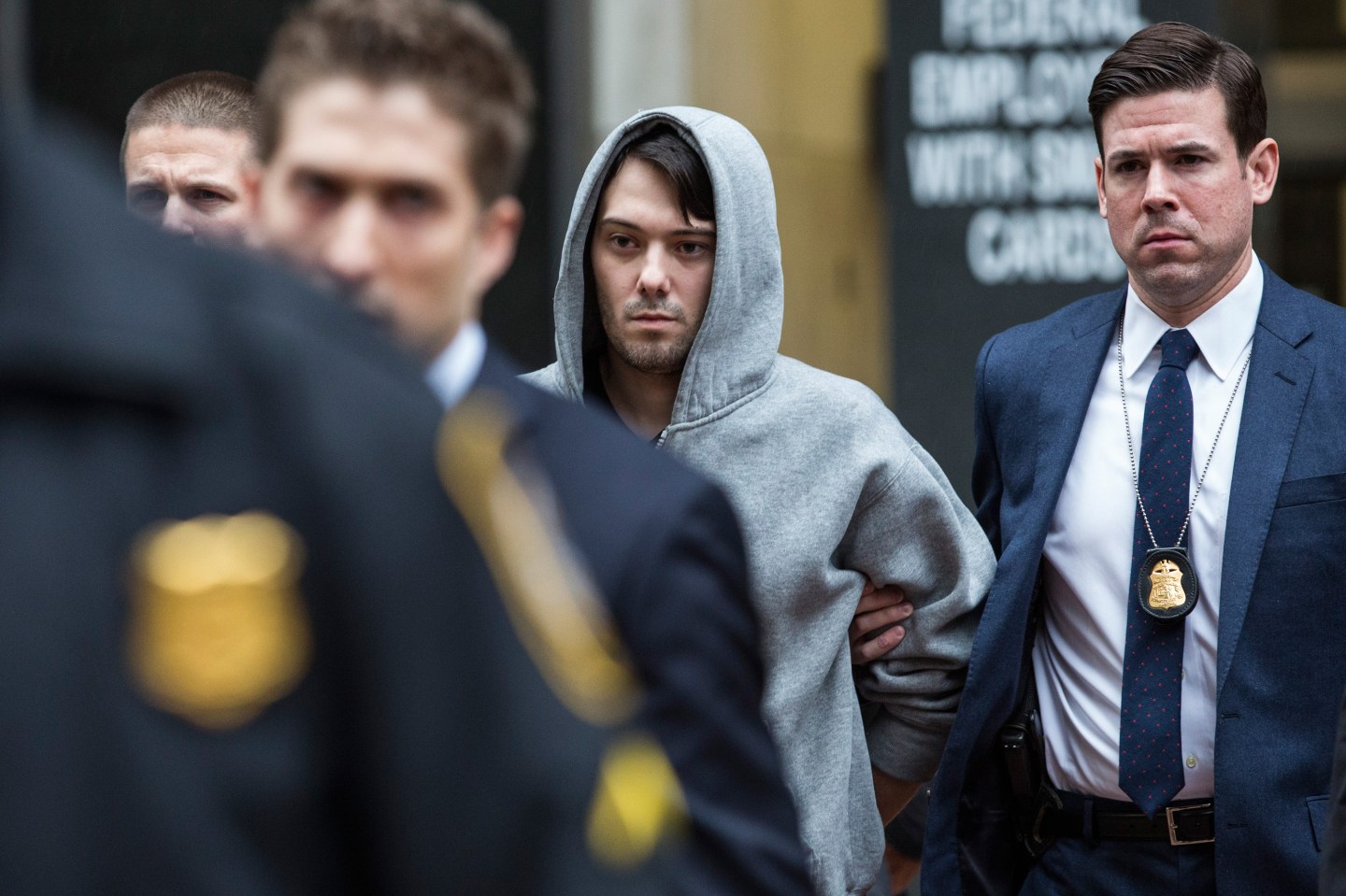 NEW YORK, NY - DECEMBER 17: Martin Shkreli (C), CEO of Turing Pharmaceutical, is brought out of 26 Federal Plaza by law enforcement officials after being arrested for securities fraud on December 17, 2015 in New York City. Shkreli gained notoriety earlier this year for raising the price of Daraprim, a medicine used to treat the parasitic condition of toxoplasmosis, from $13.50 to $750 though the arrest that happened early this morning does not involve that price hike. (Photo by Andrew Burton/Getty Images)
Photograph by Andrew Burton Getty Images

Some 13 hours after his arrest by the FBI in New York Thursday morning, Martin Shkreli denied all the government’s accusations against him, including that he used his hedge fund and biotech company “like a Ponzi scheme.”

Shkreli, the CEO of Turing Pharmaceuticals, suggested that the federal charges of securities fraud and conspiracy amounted to an unfair attempt to punish him for his unrelated and more recent decision to hike the price of a drug 5,000% overnight. That, along with off-color behavior and comments about wishing he had raised the drug’s price even higher, as well as about Taylor Swift and the Wu-Tang Clan (among other subjects), earned him widespread public ire.

The federal indictment and additional complaint by the Securities and Exchange Commission made public Thursday allege that Shkreli pillaged the previous biotech company he founded, Retrophin (RTRX), to pay back the hedge fund investors whose money he’d lost entirely. But Shkreli denied that he was operating a Ponzi scheme, as one U.S. attorney had described it. Instead, Shkreli claimed, he successfully made money for his investors.

“Ponzi victims do not make money, yet Mr. Shkreli’s investors enjoyed strong results,” a spokesman for Shkreli said in a statement. Asked to quantify the investment returns Shkreli delivered to his shareholders, and whether the profits included funds that Shkreli allegedly misappropriated from Retrophin, the spokesman could not immediately comment. (Fortune will add any responses it receives.) In August, Retrophin sued Shkreli separately over similar accusations after firing him as CEO.

In retorting the government’s accusations Thursday evening, Shkreli also insinuated that the financial transactions in question were simply over the heads of less sophisticated regulators, as they “involve complex accounting matters that the [New York federal prosecutors] and SEC fail to understand,” the spokesman said.

Shkreli was released Thursday afternoon after posting $5 million bail. Apparently his freedom was worth paying the steep fee, according to a message he posted on Twitter:

Glad to be home. Thanks for the support.

It is no coincidence that these charges, the result of investigations which have been languishing for considerable time, have been filed at the same time of Shkreli’s high-profile, controversial and yet unrelated activities. At a press conference, the government suggested that Mr. Shkreli was involved in a Ponzi scheme. Ponzi victims do not make money, yet Mr. Shkreli’s investors enjoyed strong results. In summary, Mr. Shkreli expects to be fully vindicated.