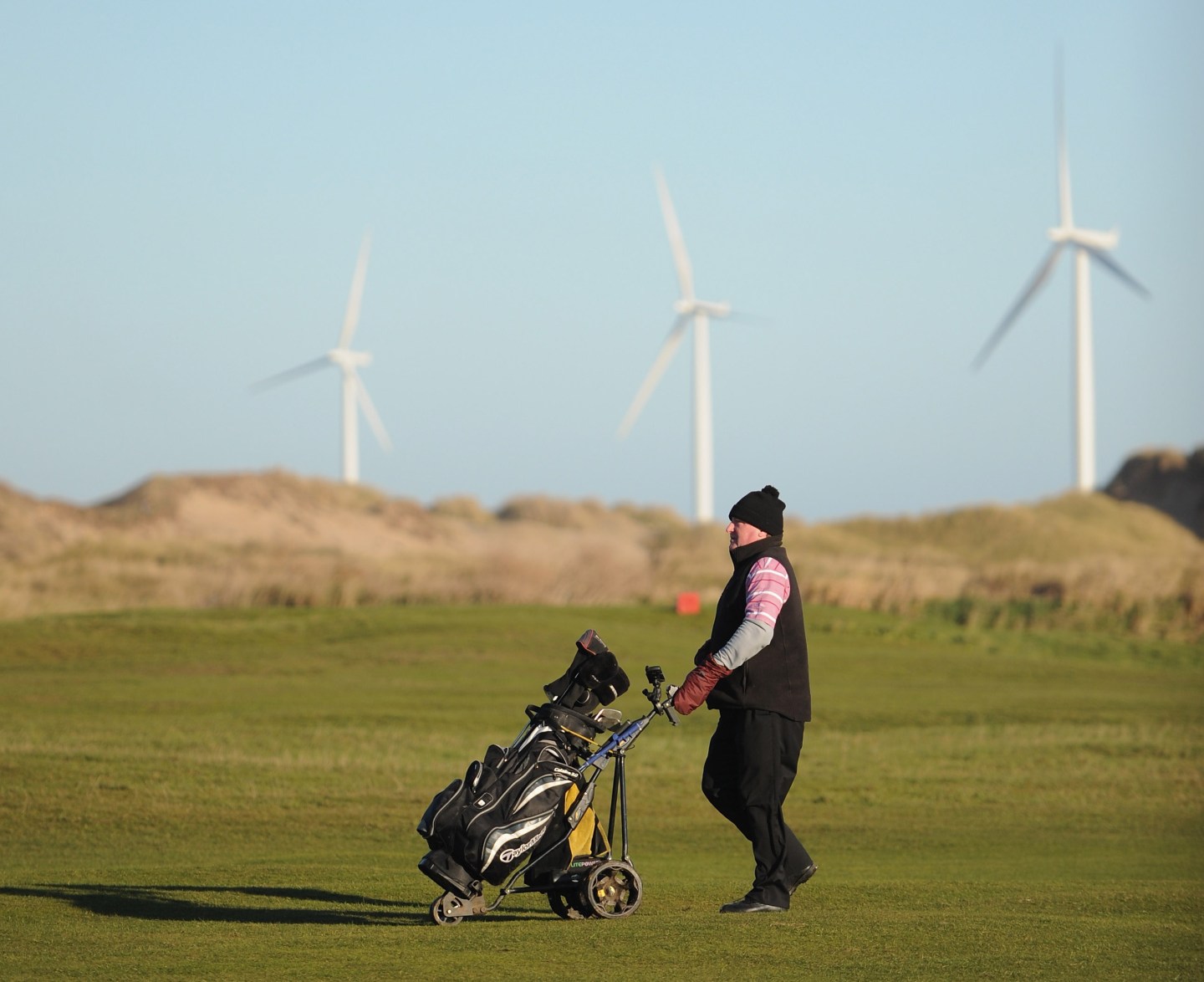 TEESSIDE, ENGLAND - DECEMBER 04: A man plays golf in front of wind turbines at the EDF renewables offshore wind farm near Redcar on December 4, 2013 in Teesside, England. The government announced today that it is to make changes to the way it subsidises renewable energy with cuts planned in support for onshore wind and solar energy, but it will give more backing to offshore wind power. (Photo by Ian Forsyth/Getty Images)
Ian Forsyth Getty Images

It’s turning into a bad week for Donald Trump’s golfing ambitions in Scotland.

Only days after it emerged that the powers behind British golf were minded to make sure his Turnberry course never hosts The Open Championship as long as he’s associated with it, the Republican Presidential hopeful has lost a court battle to stop an offshore wind farm from disfiguring the view from one of his other courses in the country.

The U.K.’s Supreme Court Wednesday upheld plans to site 11 wind turbines off the coast of Aberdeenshire in north-eastern Scotland, throwing out Trump’s two-year attempt to get the development stopped.

Trump has said the turbines would spoil the view from the links, and lashed out in characteristic fashion at the Scottish government after the ruling in a statement issued by his company.

“History will judge those involved unfavorably and the outcome demonstrates the foolish, small-minded and parochial mentality which dominates the current Scottish Government’s dangerous experiment with wind energy,” the statement said.

Alex Salmond, who as head of the last Scottish government had overruled environmentalists’ concerns to allow Trump’s project to go ahead, wasn’t taking that lying down. He accused Trump of failing to deliver on his pledge to deliver 6,000 jobs and $1.5 billion of investment in the region (and–wrongly–claiming that there was no permanent clubhouse at the links). Salmond also said Trump’s ‘unacceptable behavior’ will ensure that Turnberry, would never get another Open–an event that generates some $150 million for the local economy.

The Trump Organization in turn responded by calling Salmond “a has-been and totally irrelevant.”

“The fact that he doesn’t even know what’s going on in his own constituency says it all. We have a permanent clubhouse and the business is flourishing,” a statement from the Trump Organization said. “He should go back to doing what he does best – unveiling pompous portraits of himself that pander to his already overinflated ego.”

Trump’s comments come hot on the heels of last week’s media storm in the U.K. when he claimed that the country was in denial about its problem with its Muslim community, and claimed, without citing any sources, that police were afraid to patrol certain areas of British cities because of the problem.

The project in question will generate enough electricity to power over 68,000 homes, according to its developer, a joint venture between Swedish utility Vattenfall and Aberdeen Renewable Energy Group, who expect to invest at least 230 million pounds ($345 million) in the project.

However, Trump may still have the last laugh, and his customers certainly won’t have to worry about their view being spoiled for a while yet. The project, initially scheduled to come online in 2015, won’t be ready until 2018 at the earliest. It may not get built at all: Vattenfall, which has a 75% interest, still has to take an investment decision on it (due in the second half of next year), according to a company spokesman.

Times are getting tougher for the U.K. renewables industry as the Conservative government, in the words of one minister, “cuts the green crap” from its energy policy in an effort to keep household bills down. But the Vattenfall spokesman noted that the scheme qualifies for the most important subsidies for green power generators under the so-called ‘Renewables Obligation’ that forces suppliers to source a certain percentages of their sales to renewable energy.

UPDATE/CORRECTION: The original version of this story incorrectly stated that changes to the U.K.’s regulations on renewables had jeopardised the project’s viability. It has now been corrected. It has also been updated to include further comment from Alex Salmond and the Trump Organization.