The Surprising Thing About Obama and America’s CEOs 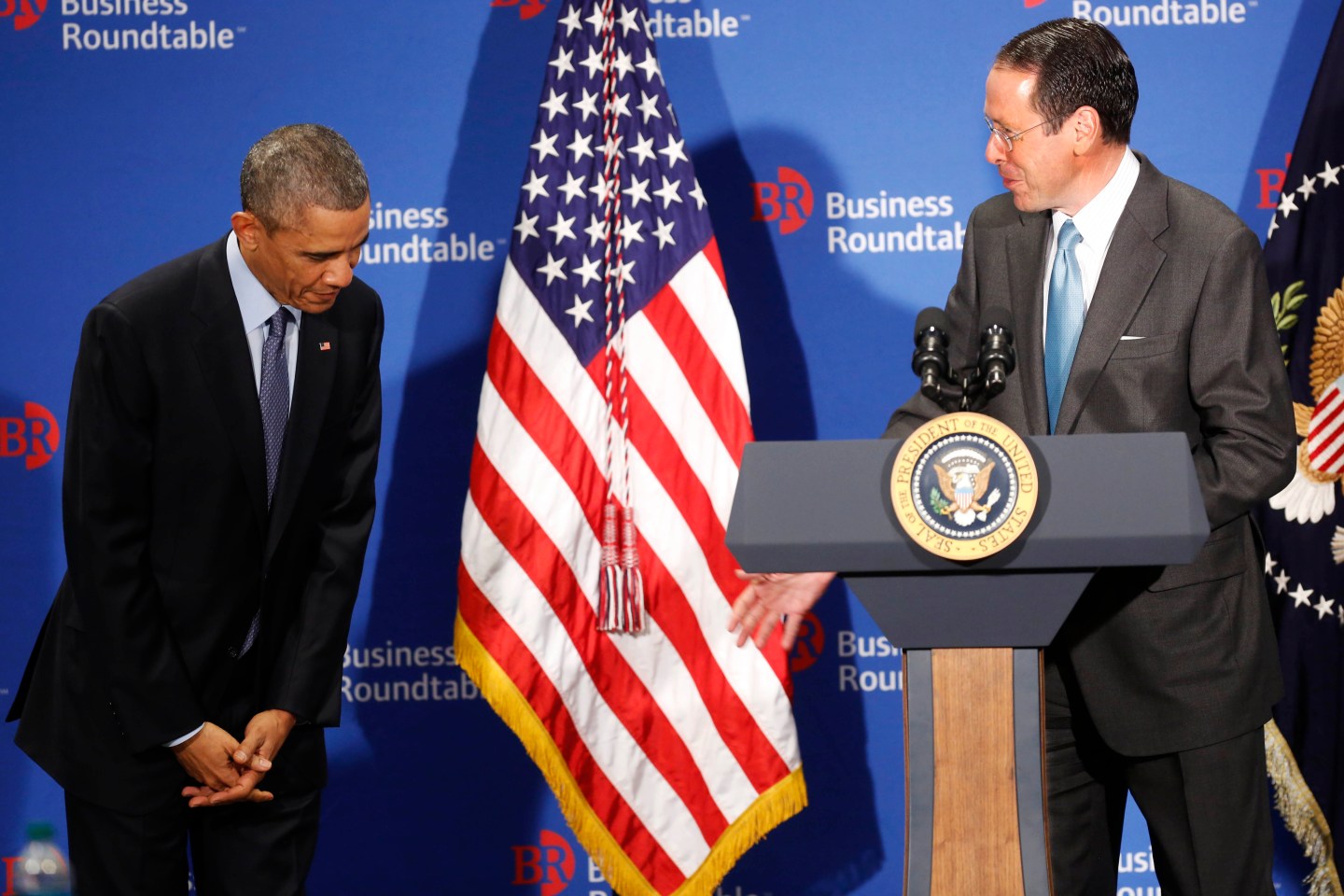 WASHINGTON, DC - DECEMBER 3: (AFP OUT) U.S. President Barack Obama (L) is introduced by Randall Stephenson, BRT Chairman and Chairman and CEO of AT&T, before delivering remarks at the quarterly meeting of the Business Roundtable (BRT) at the Business Roundtable Headquarters on December 3, 2014. in Washington, DC. BRT is an association of chief executive officers of leading U.S. companies working to promote sound public policy and a thriving U.S. economy. Obama told the CEOs he wants wages to grow at a time when corporate profits are at a 60-year high. (Photo by Aude Guerrucci-Pool/Getty Images)
Photograph by Aude Guerrucci — Getty Images

President Barack Obama, who made few friends in corporate board rooms early in his first term as he pressed for tighter regulations on banks and remarked on the “fat cats” who helped precipitate the financial crisis, heads into his final year in the White House having built – or rebuilt – alliances with chief executives of the nation’s biggest companies.

The president and his top advisers have kept an open door for CEOs of Fortune 100 companies, keeping almost 1,000 appointments with them, a Reuters review of White House records shows. Of the hundreds of appointments listed, Obama himself was present at about half, ranging from intimate Oval Office gatherings to lavish state dinners. Obama is the first U.S. president to make White House visitor logs public.

“That number is the tip of the iceberg,” said Valerie Jarrett, Obama’s longest-serving senior adviser who runs his Office of Public Engagement. The president and his aides also regularly meet with representatives from the rest of the Fortune 500, as well as small- and medium-sized businesses, both in Washington and around the country, she said. The Reuters review included only the Fortune 100 list of largest companies, and was limited to White House meetings.

Following tensions between the White House and business during the financial crisis, a turning point in the relationship came after the debt ceiling impasse in 2011 and the subsequent “fiscal cliff” of tax hikes and spending cuts in 2012, Jarrett said. Business leaders were alarmed that Congress seemed ready to blow through fiscal deadlines in spite of the effect on stock markets and the U.S. credit rating, and partnered with the White House to urge an end to the drama.

Since then, CEOs and the White House have become allies in advocating for immigration reform, the Trans-Pacific Partnership trade deal and reauthorization for the Export-Import Bank.

“I do take a fair amount of grief from Republican colleagues who think that I’ve just like totally lost my mind,” said Honeywell’s (HON) David Cote, 63, the most frequent CEO visitor to Obama’s White House, having turned up more than 50 times.

Cote was part of a high-profile commission on the nation’s debt in 2010 and serves on another advisory panel on technology and manufacturing. He said he thinks CEOs should not delegate their responsibility to help politicians understand business. “You’ve got to be able to talk about this stuff and have both sides understand the needs of the other,” he said.

Cote, a life-long Republican, said he doesn’t always agree with Obama but enjoys talking with him, calling him “a very smart guy” who doesn’t get enough credit for his work on the economy.

For Obama and his advisers, spending time with CEOs means gaining valuable insights, while gaining support for various policies. For CEOs, White House encounters may produce tangible business benefits, not to mention providing an opportunity to hobnob with the most powerful man in the world.

Reuters contacted the companies whose CEOs were among the top 30 White House visitors. Many declined comment. Some noted their chiefs were involved with advisory councils on jobs, trade and manufacturing, while noting that CEOs often discuss the same issues with lawmakers from both parties in the U.S. Congress.

The White House has tapped individual CEOs for help on policies where there is “alignment” of views, extracting a mountain of corporate pledges to bolster its policies to boost wages, provide more opportunities for young men of color, foster science and math in schools, increase diversity in the technology sector, and enhance college and training programs, among other initiatives.

Obama has bolstered his arguments for an international deal to curb climate change by securing promises from U.S. companies like Intel (INTC), Johnson & Johnson (JNJ) and Apple (AAPL) to reduce waste and use more renewable energy. The logs show CEOs from large manufacturing and industrial companies have commanded more White House meetings than other sectors. Early on in Obama’s presidency, visits by bankers and health insurance executives predominated, reflecting the president’s focus on addressing the 2008 financial crisis and reforming health care. Technology and telecom CEOs have also been regulars at 1600 Pennsylvania Avenue.

It’s not all business. For example, Cote attended a Super Bowl party in 2010, an inauguration after-party in 2013, and in October, a concert featuring Buddy Guy, Smokey Robinson and James Taylor.

IBM (IBM) executives hold the record for the most invitations to state dinners during the Obama administration, with CEO Virginia Rometty present at a September dinner with Chinese President Xi Jinping and at the March 2012 dinner for UK Prime Minister David Cameron. Her predecessor CEO Sam Palmisano was at the June 2011 dinner for German Chancellor Angela Merkel. IBM declined comment for this article.

MEETING OF THE MINDS

To be sure, while Obama and corporate chieftains may have a meeting at the White House, there may not be a meeting of the minds. “We are not their advocates unless there is an alignment of interest,” Jarrett said.

For instance, in October, Obama announced he would deny an application for the Keystone XL crude oil pipeline from Canada because it would undermine his position to lead climate talks. The project was supported by a wide range of U.S. businesses.

That decision showed that White House meetings only go so far, said John Engler, president of the Business Roundtable, which represents CEOs of large companies.

“Sometimes it can be helpful. Sometimes – you saw the Keystone decision – it doesn’t have much impact,” he said.

On other issues, Obama has lined up squarely with business, raising eyebrows among both traditional Democratic allies and populist conservative Republicans. Examples include his second-term drive for a sprawling trade deal with Asia and his defense of the Export-Import Bank against its opponents in Congress.

At the end of a session with some CEOs in February 2011, one attendee recalled how a chief executive told Obama that two new Environmental Protection Agency rules would push U.S. semiconductor manufacturing offshore.

Obama listened, said the issue was new to him and asked senior staffers to inquire. Within days, the EPA had heard from the White House. Weeks later, the problem was resolved, said the attendee, who requested anonymity to describe the private meeting.

“There’s a concern when you have the people with the most power and who control huge industries and companies, that the president ends up spending an enormous amount of time worrying about their views,” he said.

The logs show that Obama has most often met with CEOs in groups of 11 to 20 people in the Roosevelt Room, but on occasion also in the State Dining Room, the Old Family Dining Room, and even the Situation Room. There were 95 such appointments with this pool of Fortune 100 CEOs.

As White House meetings go, a group conference in the Roosevelt Room is good, but the big prize is an invitation to the Oval Office, the president’s inner sanctum. For a select few, that might even include lunch in his private dining room.

The logs showed that 22 Fortune 100 CEOs have been to the White House only once or not at all.

Phillips 66 (PSX) CEO Greg Garland does not appear to have had any meetings, for example. A spokesman said senior company leaders and other employees meet with the Obama administration “on a number of issues,” but declined to elaborate.

Halliburton (HAL) CEO David Lesar has not been to the White House during Obama’s tenure, according to the logs. The company’s previous CEO was Dick Cheney, who went on to become vice-president in George W. Bush’s Republican White House. Halliburton declined comment.

Others delegate government relations to staff and lobbyists. “Some CEOs despise Washington, think it’s all a gimmick, and don’t see any return on the invested effort,” said Bruce Mehlman, a lobbyist at bipartisan firm Mehlman Castagnetti.

Mehlman, whose Technology CEO Council client has met with the president on several occasions, said he thinks ignoring Washington is a lost opportunity, however.

“When you meet with a president who is as prepared, engaged and focused as President Obama is when he meets with CEOs, you can make significant progress advancing new ideas or getting things that are stuck, unstuck,” he said.